Report and free match highlights as Man Utd and Chelsea draw 0-0 at Old Trafford. Edinson Cavani went closest for the hosts, as Cesar Azpilicueta's penalty claims at the other end were ignored after Harry Maguire's challenge. 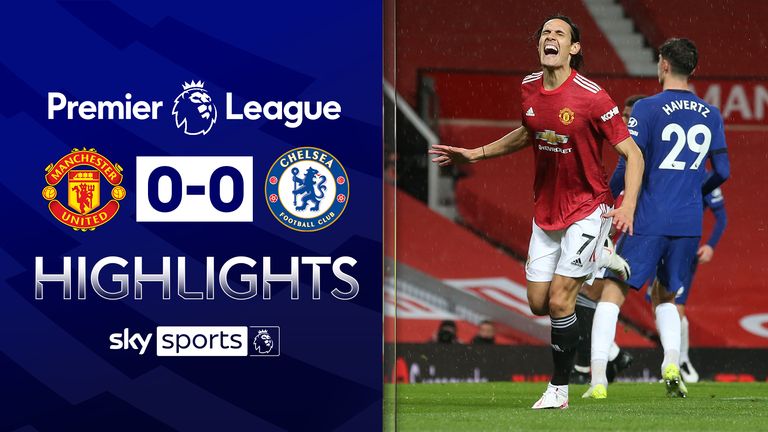 FREE TO WATCH: Highlights from the 0-0 draw between Manchester United and Chelsea in the Premier League.

Man Utd ended a run of back-to-back league defeats at home but could find no way through, as they played out a dull 0-0 draw with Chelsea in a match where both sides seemed more concerned about not losing than going for the win.

There were few chances although Blues boss Frank Lampard will feel his men should have had a first-half penalty when Harry Maguire held down Cesar Azpilicueta as a free-kick was swung into the United box.

Deadline Day signing Edinson Cavani came on to make his debut for United and almost scored with his first touch, diverting Bruno Fernandes's cross into the side-netting, while Marcus Rashford drew a fine late stop from Edouard Mendy.

It was the first time in 30 matches United had failed to score and Ole Gunnar Solskjaer's team - who had lost their first two Premier League games at Old Trafford to Crystal Palace and Tottenham - stay in 15th, with Chelsea moving up to ninth.

How Man Utd and Chelsea cancelled each other out

In heavy rain at Old Trafford, both teams - who had shipped 21 goals in nine games between them in the Premier League this season - made an overly-cautious start, with a miscued Reece James free-kick from out wide the only incident to trouble either 'keeper in the opening half hour.

Ole Gunnar Solskjaer reverted to the team which beat Newcastle in the Premier League last weekend, with Harry Maguire, Juan Mata and Daniel James back in the XI, with Axel Tuanzebe, Alex Telles and Anthony Martial out. Edinson Cavani began on the bench.

Chelsea made one change from their 0-0 draw with Sevilla in the Champions League, with Mason Mount dropping to the bench and Cesar Azpilicueta coming into a back three.

Mendy nearly handed the advantage to United soon after with what would have been a terrible howler, passing across his own goal and hooking it out for a corner, and from the resulting set-piece Fernandes fired straight at the Chelsea 'keeper.

Mendy then came up with two smart saves before the break, first blocking Rashford's drive and then parrying away Juan Mata's curling effort, as penalty shouts at both ends were rejected - first, wrongly, from Harry Maguire's grapple with Cesar Azpilicueta, and then sensibly from Thiago Silva's kick to Rashford's foot.

Solskjaer made a double change early in the second half to try to break the deadlock, sending on Paul Pogba and debutant Cavani, and the 33-year-old striker was immediately just off target.

Kai Havertz and Christian Pulisic failed to convert an inviting Reece James cross before Kurt Zouma was left aggrieved when his complaints about Victor Lindelof's challenge on him from a corner wasn't punished.

But it was United who finished on top, with Thiago Silva blocking Pogba's tame shot before impressively denying his former PSG team-mate Cavani. There was one more fine stop from Mendy to keep out Rashford to ensure the game finished goalless.

Man Utd manager Ole Gunnar Solskjaer: "Two teams that played in Europe this week and I think it showed a little bit in the first half, not the greatest. Second half we pushed on and if that Stretford End is full we might get some help and get that ball over the line. We created half-decent opportunities. A good defensive performance and we created the big chances that could have given us the win. It's a solid week we've had with two wins and one draw."

Chelsea manager Frank Lampard: "Happy with the clean sheet. You obviously want more than a point but if you come to Manchester United and you don't concede, that's a great base. I think that shows progression for us. Was our game in the final third what we wanted it to be? No. I'm less concerned about the attacking side, because I know the quality we have. Should we have had a penalty? Without a doubt. It's a really clear penalty." 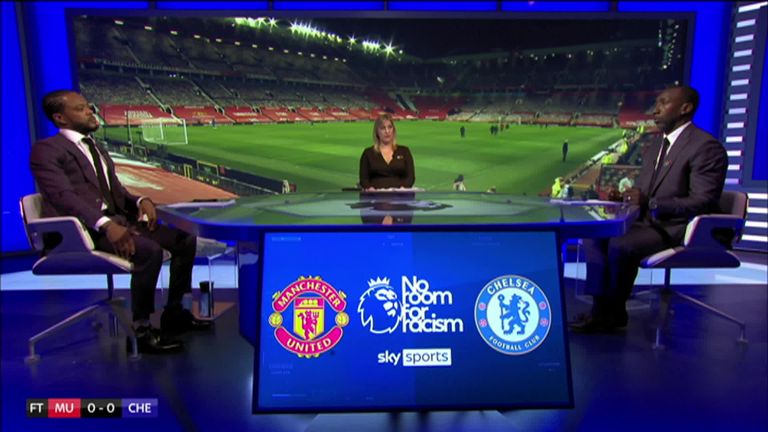 After a dull 0-0 game between Manchester United and Chelsea, Patrice Evra and Jimmy Floyd Hasselbaink both discussed the attacking and defensive intentions from both sides and didn't hold back!

In a game of few real standout performances, it was Thiago Silva's experience and authority at the heart of Chelsea's defence which earned him the man of the match prize.

The Brazilian was in the right place at the right time to block efforts from Paul Pogba and Edinson Cavani and topped the stats for clearances as Chelsea held out for a valuable clean sheet.

Chelsea travel to Krasnodar in the Champions League on Wednesday, before playing Burnley at Turf Moor on Saturday at 3pm.