Nigel Pearson: My battle against Covid-19, leaving Watford and desire to return to the game

Nigel Pearson speaks to Sky Sports News about his battle against coronavirus, his departure from Watford with just two Premier League matches remaining and his determination to manage at the top level again. 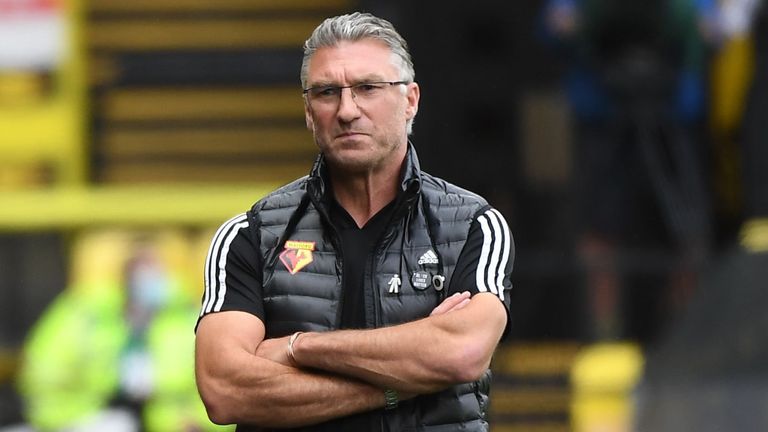 Former Watford manager Nigel Pearson opens up to Sky Sports News about a 'tough year' as he reveals he contracted coronavirus, suffered heart issues and dealt with the passing of his mother.

Throughout his football career, as player and manager, Nigel Pearson has exuded a strength of character that has often impressed, and at times infuriated. Opponents, chairmen and journalists alike will pay testimony to that.

But this strong man admits that 2020 has tested his mental and physical resolve like never before. From the unexpected death of his mother in January, to his sacking by Watford with two games of the season to go in July, he acknowledges how tough it has been.

Perhaps the hardest of all to cope with, has been his battle with coronavirus.

He's kept his illness secret until now, but it's clear the virus was affecting him more and more as he battled to keep Watford in the Premier League in the summer. More importantly, it also threatened his life.

"I had some heart issues, and then joint issues... it was a difficult time," Pearson explains, his voice trailing off.

"Through August and September, I was particularly unwell for sure. But the medication I'm on now is certainly helping a lot, and there'll be a lot of people out there experiencing the same."

Pearson says he was in the middle of a cluster of cases at Watford when the UK first went into lockdown. He caught the virus along with a number of other players and staff at the football club in the spring - long before the Premier League had been able to introduce its widespread testing procedures.

"When I contracted Covid back in March, I wasn't particularly unwell, didn't have a lot of symptoms," he says. "I didn't feel quite right, but otherwise I felt fine. It's something that has developed at a later date."

In fact, Pearson's health was deteriorating just as football was returning for the restart and as he began the final nine games of the season, when Watford were outside the Premier League relegation places on goal difference.

The Watford players noticed the difference - their usual ebullient, enthusiastic 'Gaffer', whose energy and motivational skills were key to the way he worked - looked exhausted and flat. He spent more time away from the training ground, though he battled on.

"It wasn't easy for sure, but I dealt with it because I had to," he says. "The other choice was to walk away from the situation. I felt when I was in work, I was still contributing.

"I missed a couple of press conferences, but there would be a number of people who didn't know what was going on, because when I was in work I was trying to make sure I was going full tilt. When I got home it was a different matter."

When asked directly how serious his health condition was, and how long he had spent in hospital, Pearson changed the subject quickly, and said: "I had plenty of tests."

But in truth by then, even though his heart irregularities had improved, his joint pain was debilitating. He often couldn't move, had to be helped out of chairs by his wife, struggled to walk, and was sleeping all night and for much of the day.

"It's amazing what medication can do," he says. "That was just one part of it, so dealing with the after-effects has been a bit of a journey back, but I'm making good progress."

Pearson says he is not sure whether his illness played a part in Watford's decision to sack him with two games of the season to go, with the team three points clear of the bottom three.

"I don't know what the reason is, I was never given a reason. I presume it was just the owner's decision to change," he says.

"I was furious at the time, obviously. I'd shown a lot of commitment - even when I lost my mum, I didn't break stride at work."

He says it rankles all the more because of how he, and assistant Craig Shakespeare, improved the team and their survival chances. Watford were bottom of the Premier League, having won eight points from 15 games when he took over in December.

"I think anyone would have taken going into the final game of the season with a fighting chance," he says. "I was annoyed at the time. I'm not now, I don't think about it much."

Pearson is determined he'll manage at the top level again.

"At some point in the future I'll be fine. For the time being, I'm making a good recovery. Priorities at the moment are to ensure I'm ok. And I am," he says.

"When you experience something like that it puts things in perspective somewhat. I'll be fine to be in the technical area again in the future I'm sure."

So does he think Watford would have stayed in the Premier League, if he hadn't been sacked with two games to go?

"We'd have backed ourselves for sure. But that's an irrelevant question now," he says.

After all Pearson has been through in 2020 - and is still going through - he doesn't have much time for hypotheticals and "what ifs".

Watford FC declined to comment when contacted by Sky Sports News with regards to Nigel Pearson's departure from the club.