Arsenal have scored just one goal in their last five Premier League matches. Star striker Pierre-Emerick Aubameyang has no goals from open play since the opening weekend. How does Mikel Arteta get the Gunners firing again?

Mikel Arteta has a creativity crisis on his hands at Arsenal.

It is now seven hours and 56 minutes since his side scored from open play in the Premier League - and a formation change and shift in position for Pierre-Emerick Aubameyang did little to solve the problem in Sunday's 0-0 draw at Leeds United.

Nicolas Pepe's senseless red card on 51 minutes did not help matters, of course, but even in the first half, when they were at full strength, Arsenal simply could not find a way to create openings against their hosts. 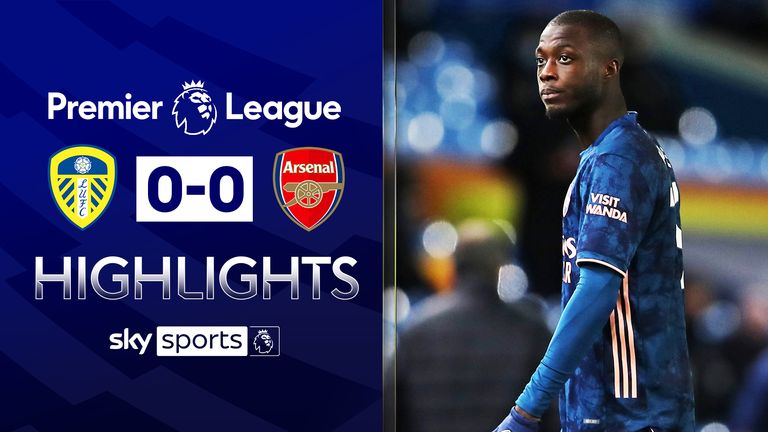 FREE TO WATCH: Highlights from Arsenal's draw at Leeds in the Premier League

There were five shots from Arsenal in that opening 45 minutes but not one on target - against a Leeds side with statistically the joint-worst defence in the league.

Toothless in attack? Arsenal were rarely getting in positions to even threaten. It is a recurring problem, with Arsenal now goalless in four of their last five Premier League games.

Inevitably, the spotlight focuses on Arsenal's star striker Aubameyang at moments like this. He scored 22 times for them last season but has just one goal - a penalty - from his past eight league games.

Aubameyang's drop off in form has been a puzzle and a frustration. But his switch to centre forward did not prove to be the solution, as many had been recommending.

Instead Aubameyang - starting a Premier League match through the middle for Arteta for the first time - was isolated, managing just 17 touches in the first half. Arsenal 'keeper Bernd Leno, by contrast, had 27.

Twice he was outmuscled in quick succession by Leeds defenders after long balls forward from Leno just before half-time. Playing with his back to goal just is not his strength.

Finishing in the box is, though - but a wild slash past the near post highlighted his current lack of confidence in front of goal, while a swivel and shot straight at Illan Meslier on the hour mark was miscued and tame by his standards.

That was his only shot on target of the match, after managing just three in his previous six Premier League games from wide positions. These are lean times for a player who has feasted on goals since coming to England in January 2018.

Aubameyang's sharpness at Elland Road could be put down to a less-than-ideal preparation, given he and his Gabon team-mates were forced to sleep on an airport floor while they were on international duty last week. Or perhaps there are wider issues around his dip in form which would explain his problems before the international break.

But Aubameyang's position or performance is not Arteta's main concern when it comes to Arsenal's problems in attack. This is a much wider issue, encompassing their entire team on the front foot.

They now rank among the bottom six teams in the Premier League for shots, shots on target, and chances created per match in the top flight this season. The fact the exiled Mesut Ozil still ranks second when it comes to chances created by Arsenal players since the start of last season is a telling stat.

Progressing through midfield, beating defenders out wide, coming up with a spark in the final third, and creating space in and around the box for their attackers has become Arsenal's problem - whether they are shaping up in a 3-4-3, 4-2-3-1 or any other system.

Pepe's red card clearly distorts the analysis of Arsenal's performance at Leeds. If anything, the players deserve credit for the fight they showed to hold out - with the help of the woodwork on three occasions - for a point.

But there were signs at 11 v 11 in the first 50 minutes that the problems we have seen from their attack for much of this season remain - and cannot be solved with a simple reshuffle of players on the pitch.

Arteta's focus needs to now be on how to get the Gunners firing again.