Jose Mourinho on goalscorers Heung-Min Son and Harry Kane in Spurs' 3-0 win over Leeds: "That movement of Kane appearing on the right side and Sonny in a finishing position, it fit well with our game plan. They are doing special things this season."

No combination has made as many goals for one another in a Premier League season than the 13 Kane and Son have created and scored this season - with Kane turning provider for Son to net Tottenham's second in a 3-0 win over Leeds on Saturday lunchtime.

Kane, a two-time Premier League Golden Boot winner, instead tops the division's assist charts this season, having created only one goal for his team-mates in the entirety of 2019/20.

Asked whether the pair were the best attacking duo in the Premier League, Mourinho told BT Sport: "The understanding [between Kane and Son] is good. Against Leeds it was important to have mobility in attack because they mark man to man and if you stay in static positions you give them an easy job. When you have mobility it is more difficult for them.

"That movement of Kane appearing on the right side and Sonny in a finishing position, it fit well with our game plan. They are doing special things this season."

When speaking in his post-match press conference he added: "They are very good players, as you've seen for many years. They've played together for many years, too, that plus the way we want them to interact brings goals.

"I want more goals, especially more goals from other players, but today the second goal is great. It's great because it was something we spoke about against a team that defends the way Leeds does, it's very important to have mobility, so to have a striker on the right wing and a winger scoring on the front post is very important from a strategic point of view." 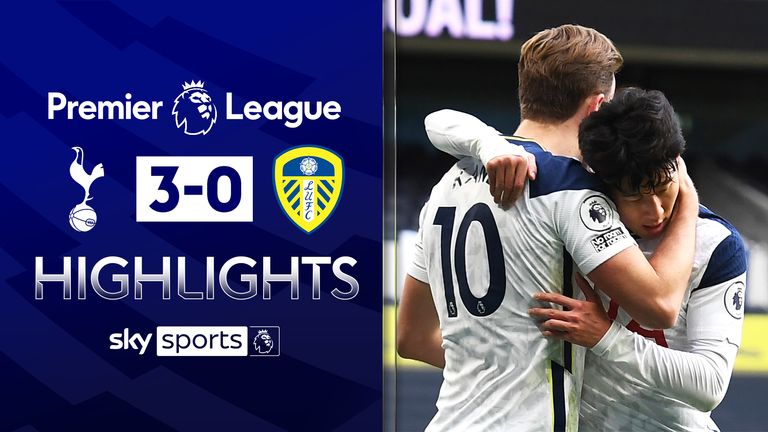 FREE TO WATCH: Highlights from Tottenham's win against Leeds in the Premier League

Son and Kane have scored almost four fifths of Tottenham's goal tally between them this season, but Mourinho enjoyed seeing a rare Toby Alderweireld strike to net Spurs' third against Leeds, and said another of his team-mates - winger Steven Bergwijn - has the ability to add to his return too.

"He's accumulating physical problems, I don't know if you could understand but even in the last 10 minutes he was holding his groin, adductor, he has been having problems stopping him now and again to train properly and at high-intensity, but he gives very good things for the team. I believe goals will arrive if his condition improves."

Bielsa: We had moments

Marcelo Bielsa followed his opposite number in praising the performance of Kane and Son but said his side made "unforced errors" in allowing Tottenham to scored three goals past them without reply.

He said: "We had moments and in general the first half was good. It was better in the initial 30 minutes and more even in the final 15 minutes of the first half.

"The beginning of the second half was our worst moment in the game. And in the end, it was again positive.

"There are two aspects that unbalanced the game. The opponents' forwards were very damaging and difficult to contain. We made some unforced errors which facilitated their attack but we had good offensive production. What we needed to do was not lose the ball in our own half.

"There was a lot of danger on the second balls and on the set-pieces. We could have aspired to a closer game.

"We have already gone through similar moments like this and there are improvements that are needed of course. The ones against Chelsea and Manchester United, this game was clearly better. But there are steps we need to make that we haven't yet made."