Mohamed Salah, Sadio Mane and Roberto Firmino have struggled to hit their previous heights in recent weeks; Jamie Carragher believes Liverpool's front three will soon need to be refreshed he is "worried" for Firmino 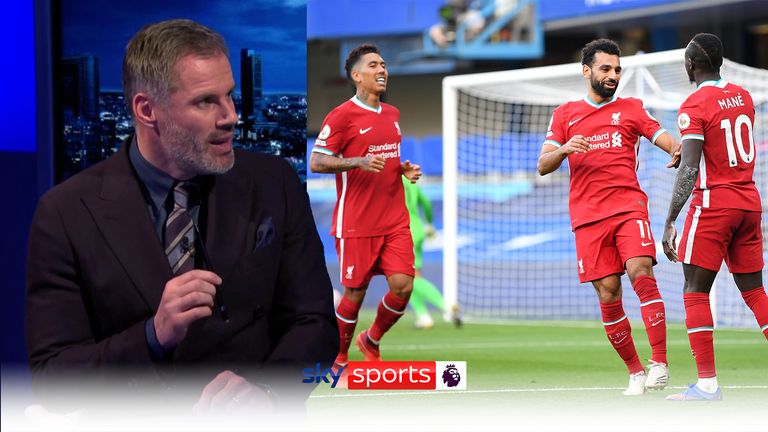 Liverpool's front three will soon have to be broken up and Roberto Firmino could be the first man to make way, according to Sky Sports pundit Jamie Carragher.

Mohamed Salah, Sadio Mane and Firmino have been instrumental in Liverpool's success under Jurgen Klopp, scoring 183 Premier League goals between them across the last four seasons.

But their form has come under scrutiny lately following a run of three games without a goal in the Premier League, including Sunday's scoreless draw with Manchester United at Old Trafford.

Speaking on Monday Night Football, Carragher pointed out that the trio have already been together for longer than other great Premier League front threes and while he expects Mane and Salah's form to improve, he is less sure of Firmino's long-term prospects.

"The reason I say that Liverpool's front three is unique is not that they are better than other front threes, it's how long they've stayed together.

"They are now in their fourth season and the great front threes in the Premier League have normally only been together for two or three years.

"We're now in year four for Liverpool and we're maybe going to go into year five because they've all got two or three years left on their contracts.

"They are all getting to their late 20s and sooner or later that front three will have to be broken up.

"You can't, in two years' time, say 'we're going to buy a new front three' and replace them all. It will change over time.

"At this moment, I think Mane and Salah are going through poor form. It happens.

"I'm still confident that Mane and Salah will start scoring goals again, but I must say I am worried for Firmino."

Firmino's Premier League goal totals have declined from season to season over the last four years. His lack of goal threat is an issue for Carragher but the Sky Sports pundit is more worried about other aspects of his game.

"He's never been seen as the goal scorer, that's the responsibility of the other two," said Carragher.

"But he's there to chip in and when they're not scoring, and I just feel he needs to be a bigger goal threat.

"Yesterday [against Manchester United], he had a couple of chances but he's not quite striking the ball right. His bringing players into the game has dropped off too.

"And also the counter-pressing and winning the ball back has dropped off with Firmino - and not just this season.

"I'm actually going back to last season, when Liverpool won the league. I was a little bit worried then and I was thinking, 'Can he turn it around this season?'"

Firmino's numbers for possessions won in the final third have dropped dramatically in recent months, from 1.11 per 90 minutes to 0.42 per 90 minutes.

"He was the best in the league at it, but it's a massive drop off, over 50 per cent from last season," said Carragher.

"Last season, when he wasn't getting the goals and assists, you'd say, 'well, look at what else he's doing from the front'.

"I'm sure everyone's numbers for pressing have gone down this season, but that for me is a big drop.

"He's the one I'm worried about, whether it be a lack of form or maybe just that slow decline as you get a little bit older, which is natural for any attacker when they get to their late 20s because they don't play as long as players in other areas of the pitch.

"It's almost unprecedented, what Liverpool have done with their front three, how long they have been together and how often they play, and sooner or later that front three will have to be broken up."