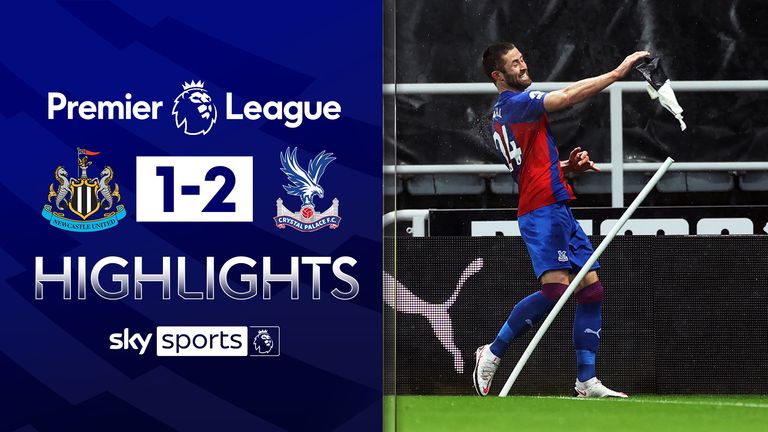 FREE TO WATCH: Highlights from Crystal Palace’s win against Newcastle in the Premier League

Crystal Palace made it successive Premier League victories for the first time since September as Gary Cahill's header secured a 2-1 comeback win over Newcastle at St James' Park.

Steve Bruce's side made the perfect start as Jonjo Shelvey struck inside 70 seconds but Jairo Riedewald's rifled strike restored parity (21).

Palace completed the turnaround four minutes later as Cahill rose to flick home Ebere Eze's free-kick for his 50th career goal for club and country - and Newcastle were unable to find an equaliser during an uneventful second period.

The result moves Palace back up to 13th in the Premier League following Wolves' earlier win over Arsenal, while Newcastle slip to 16th - below Burnley on goal difference.

Following morale-boosting victories at the weekend over Everton and Wolves respectively, the shackles were visibly off these two teams on a wet and windy Tyneside. Bruce had spoken about seeking a repeat performance to that witnessed by his team at Goodison Park, and within two minutes the hosts were in front.

Miguel Almiron escaped Scott Dann down the left and after his cross was knocked back by Callum Wilson, Shelvey kept his composure to drill his first-time shot into the bottom corner for his first goal since July. It extended Palace's poor record of only one clean sheet in 15 away games.

Jeff Hendrick went close to a quickfire second for Newcastle as the former Burnley midfielder ran onto another Wilson flick to hook his effort just wide. The past four meetings at St James' Park had all ended 1-0, with Newcastle winning three times and Palace once, but there would be no repeat this time as the Eagles belatedly joined the party.

Jordan Ayew had already gone close to converting a Patrick van Aanholt cross before he was involved in the visitors' equaliser. It was the same combination as Van Aanholt's cutback sought the forward six yards out, but the ball deflected out to Riedewald to thrash emphatically past Karl Darlow.

Man of the match: Scott Dann.

Newcastle were rocked by the setback and conceded a second goal four minutes later. Jamal Lewis was late on Ayew, and from Eze's resulting free-kick, Cahill got in front of Wilson to glance in his first goal since scoring for England against Nigeria in June 2018.

Palace were denied a third when Nathaniel Clyne's cross was touched on by Michy Batshuayi for Wilfried Zaha to convert from a tight angle but the assistant referee's flag spared Newcastle with the Belgium striker in an offside position.

Newcastle head coach Steve Bruce made one enforced change for his side's clash with Crystal Palace as he looked for back-to-back victories. Skipper Jamaal Lascelles, who limped off during Saturday's 2-0 win a Everton with a hamstring problem, was replaced by Ciaran Clark and Ryan Fraser retained his place after fighting off a bout of illness.

Palace boss Roy Hodgson made two changes to the side which beat Wolves 1-0 at the weekend, drafting in Gary Cahill and Jairo Riedewald for Cheikhou Kouyate, who was named among the substitutes, and the injured James McCarthy.

The first-half entertainment did not end there, as Vicente Guaita was forced into action to keep out Ryan Fraser's shot from a superb Wilson pass. Almiron's free-kick was then deflected just over before Fabian Schar's header from the ensuing corner was a whisker wide of the far post.

Allan Saint-Maximin had been given a thorough warm-up during the interval as Bruce looked to reinforcements, but Palace suffered a blow within 10 minutes of the restart as Zaha was forced off with a hamstring injury following a challenge with Javier Manquillo.

It checked Palace's momentum, and Bruce immediately introduced Saint-Maximin as he sensed an opportunity. The Frenchman's first involvement was to dribble free and set Wilson on his way but Clyne made a vital recovery challenge.

Newcastle looked to build up a head of steam with Schar and Shelvey both firing over from distance late on before a glaring miss from Andros Townsend at the far post from Riedewald's cross kept the contest alive.

But Palace easily absorbed the final onslaught to record back-to-back league wins for the first time since the opening two games of the season. 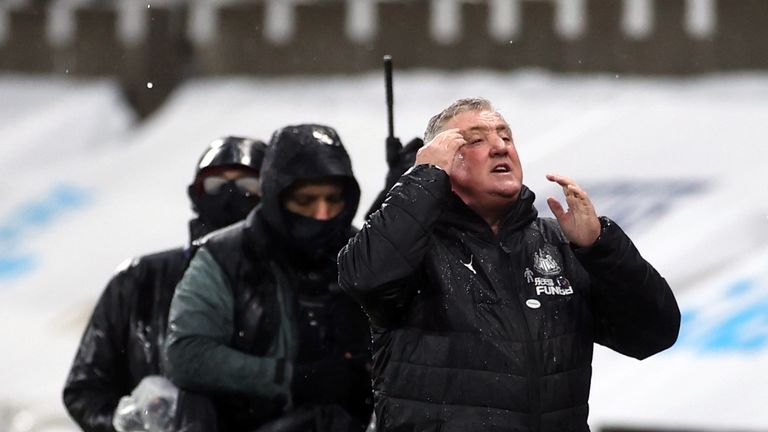 Newcastle boss Steve Bruce: "The performance was pleasing for me. You're hoping you keep playing well and the results come. That's back-to-back home games where we've not got what we deserved. We certainly didn't deserve to get beat. There were 10 minutes in the game where it was all Palace, but those little mistakes cost you at this level.

"We keep protecting Allan [Saint-Maximin], that's another half an hour now and he's getting his fitness levels back up. He's showing signs that he'll soon be ready to start.

"Our performance levels have been better certainly over the last few weeks. We have tried to implement change in the last month or so and what you're looking for is a performance to go with it. As often in the Premier League, it's defining moments.

"Crystal Palace do what they do and go back to defend deep so you have to prise them open. We had Ryan Fraser playing at right-back by the end to try and break them down but it was not enough.

"We created so many chances in the first half which is the most disappointing thing. We found it a struggle to create in the second with them sitting deep. We had to be a bit more clinical - a bit like they were." 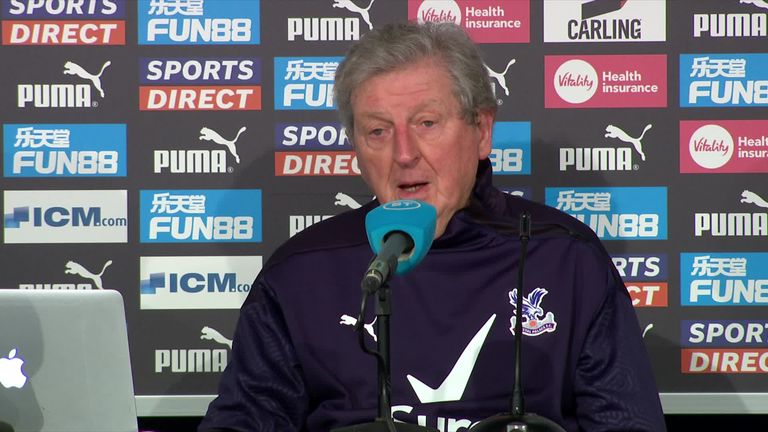 Crystal Palace manager Roy Hodgson says it is a 'nice feeling' to move 15 points clear of the relegation places after back-to-back wins.

Crystal Palace boss Roy Hodgson: "It's a back-to-back win which is even harder to come by. We knew it wouldn't be easy so it's good to get six points from here [and Wolves]. But suddenly we are looking around wondering where all our players are. It's going to be a problem trying to get these players fit again. These injuries have to be assessed. [Wilfried Zaha] doesn't normally get injured so it's concerning he has come off. Hopefully it's nothing serious.

"The first half was a good half from both teams but I didn't get the impression we were too open. I thought we used the spaces to good effect. There's less pressure until Monday - that's the truthful answer, but it's nice to go into the game with Leeds six points better off than we were last Friday.

"It had the look of a very difficult spell for us so to get the six points brings a sense of relief I suppose. It's a nice feeling that the two games - two very difficult games - are behind us and we're now much further away from the teams at the bottom of the table than we were before.

"I thought [the players] dug in extremely well. The work rate right the way through the team was tremendous. The back four were organised and disciplined. They put their bodies on the line. It's the type of things that win you games."

Man of the match - Scott Dann

Palace inflicted the damage during a five-minute spell in the first half but it was Dann who was at the heart of their stubborn resistance during the second period, limiting Newcastle to half chances.

The experienced centre-half was upstaged by his defensive partner Cahill in getting on the scoresheet but it was his timely headed clearances and interceptions that ensured Palace secured their first win from a losing position this term.

Dann made more blocks (3), clearances (4) and interceptions (2) than any other Palace player during a typically robust display. 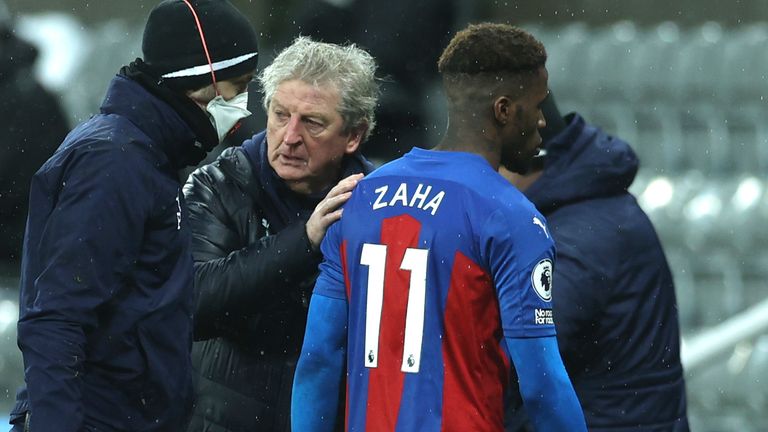 Crystal Palace manager Roy Hodgson says Wilfried Zaha's injury will be assessed after he was forced off in the second half of their 2-1 win at Newcastle with a hamstring issue.