Watch the second leg of the Sky Bet Championship play-off semi-final between Swansea and Barnsley on Sky Sports Football from 6pm on Saturday, May 22; Kick off 6.30pm.

Away from a certain part of Yorkshire not a huge amount of people took much notice when a young American striker joined Barnsley on loan from Orlando City on Deadline Day in February.

Fair to say they are taking notice now. Daryl Dike, just 20, has been nothing short of a revelation and he is doing it all somewhere with very different conditions to the ones he is used to in the Sunshine State of Florida.

"The weather's been fine, but it can be a little bit odd sometimes!" Dike jokes as he speaks to Sky Sports. "It will be sunny one second, then super rainy the next.

"It may be a little bit colder than Orlando, but I haven't been able to get out as much as I'd have liked, or seen as much of the surrounding area.

Read all the best interviews, previews and stories ahead of the 2020/21 Sky Bet Championship, League One and League Two play-offs.

"But sometimes when you go to the store or market, people will say hello and we'll talk for a little bit, and because the team is doing so well everyone is super positive, and it's great to have that kind of feedback and support. Even if it's not at the stadium.

"Obviously things haven't been open for most of the time I've been here and I haven't been able to fully experience the country, but I've enjoyed it 100 per cent, and the people here in Barnsley are very friendly.

"Most importantly the football has been going well!"

Going well is a bit of an understatement. Dike has scored nine times since joining the club in 19 Championship appearances, helping fire a side that avoided relegation by the skin of their teeth last season into the play-offs. It has been this season's feelgood story in the Championship, and in the second half of the campaign the 6ft 1in striker has been right at the very heart of it - driving them from mid-table into the top six.

It was a whirlwind arrival. One minute he was at a training camp with the US national team, the next he was signing at Oakwell and making his debut in the FA Cup against Chelsea - the club he happened to support when he was growing up back in Oklahoma.

"It was an amazing moment," he says. "You go from being young and watching these guys on TV wondering if you'll ever get to that level, and then suddenly you're warming up next to Olivier Giroud, or trying to steal a ball from N'Golo Kante.

"To be able to share a field with these players on my first experience in English football, and even just making my debut for Barnsley was a great moment. I'll never forget it."

Growing up as an aspiring striker and supporting Chelsea, you won't be too surprised to know who his hero was.

"I looked up to Didier Drogba and the things he did," he says. "He's someone you want to model yourself after, so I try and take pieces from his game and from other players like Romelu Lukaku and Karim Benzema.

"But ultimately I just want to be the best Daryl I can be. I'm paving my own path and doing my own things."

Closer to home, he also took advice from two Orlando City team-mates in helping prepare for his journey to England. Dom Dwyer, an English-born US international who grew up in West Sussex, and Nani.

"Dom is from around here, and Nani has obviously played in the Premier League, so it was amazing to have people like that to help prepare you with their wisdom of football here," says Dike.

"They were mentally preparing me and trying to prepare me for the league, because I knew it was going to be different and difficult. I'd never been to England, so it's been a big change. It's a different experience but it's been good for me.

"Nani was phenomenal with me. To be able to play with someone with all his achievements and all he's won and all he's done. You can see him on the pitch and how good he is, but he's been so supportive away from it too.

"He took me under his wing and always took time out after training to try and help me with things, whether it was mentally, tactically or technically. It's great to have a person like that who wants to see you do better, and he went out of his way to help me grow as a player."

Away from fellow professionals, there has been the support of his family. His brother Chinedu 'Bright' Dike is 14 years his senior and enjoyed a successful MLS career as a forward, and his sister Courtney played for Nigeria at the 2015 Women's World Cup.

Dike also speaks proudly of his parents, incredibly influential in keeping him on track with football, and encouraging him to continue with his studying.

"My family has had such a huge influence on my career, and I definitely wouldn't be here without them," he says. "From my parents to my younger sister, whether they played or not they all know the game. They all have my best interests at heart, and they can give you tips to help you out and try and push you to reach your greatest heights.

"When I was younger I played basketball and I ran track and field, but football has always been the main thing. I would play American Football in the yard with friends and I enjoyed it. Obviously I'm a bigger guy, and people would try and get me to play for the High School team and wherever else, but my parents didn't like the sport because of the injuries and how dangerous it was.

"Football was going very well so they said I could stick to that, but American Football was never going to happen. It seems to have all worked out now, and I'm happy with their decision!"

Dike is also still studying to complete his degree in finance online. Pursuing education, even while he chases his football dream, is another huge priority for him.

"From a young age I played with my club team and trained sometimes with one of the pro teams in Oklahoma," he says. "Then I went to the University of Virginia and trained every day there whilst pursuing my studies.

"After two seasons I left to join the MLS and then got drafted by Orlando. But all the time I've still done my studies online and pursued my degree. I have another year left, so it's important for me to be able to finish.

"The degree is going great. Education has always been a big part of my life. I've always enjoyed learning different things and, as much as I'd love to play football until I'm 97, I don't think the body can do it!

"Hopefully getting a degree now will help me when I'm done playing."

Dike is a worker in every aspect of his life. And he knows even with his natural gifts he still has to give maximum effort to get to where he wants to be.

"I think I'm pretty athletically gifted in terms of size and speed, and I like to think I'm a smart player in terms of my movement," he says. "I want to be a lethal finisher, and I want to have good hold-up to bring people into play. I know I can get better at those things, but I'm not worried because I know that they will come with more training, time and experience.

"I've been lucky to have many coaches who have played many different styles. I think I've been able to play in different systems and been able to have an impact. I know because of my physique I can be used for a certain style of play, but if I need to play other ways I can do that too.

"I've always said I wanted to play with the top players in the top leagues. My only focus is on doing what I can now and to keep pushing myself to get there."

For now he is dreaming of firing Barnsley into the Premier League via the play-offs. In the future, he just wants to be on the biggest stages.

"I've always dreamed of playing at the highest level, and English football is one of those top levels for me," he says. "It's amazing to get to experience it at such a young age. Especially here at Barnsley, with how well we've done this season." 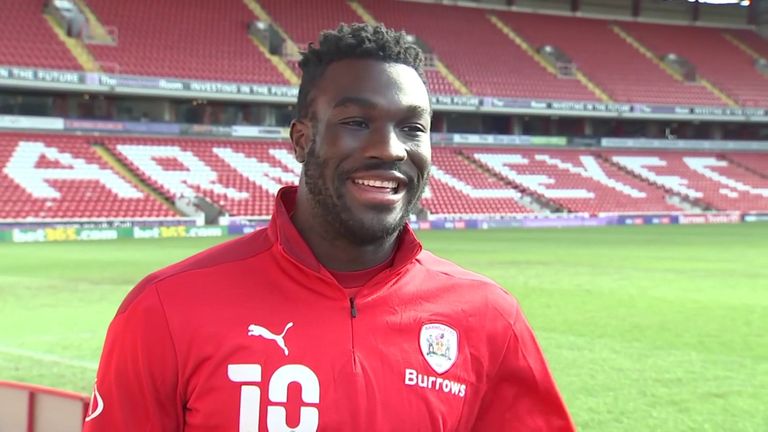 Barnsley striker Daryl Dike, on loan from Major League Soccer side Orlando City, says dancing is his way of showing fans the real him

The future looks bright at international level, too. There are a host of promising US youngsters all over Europe right now - Christian Pulisic at Chelsea, Sergino Dest at Barcelona, Giovanni Reyna at Borussia Dortmund and Dike himself, to name just a few.

It has Dike really excited about the future for US football.

"It's my dream and some of the talent we have is phenomenal now in terms of players coming through," he says.

"It's a product of the systems we have in the States that we have developed. It's great because we didn't qualify for the World Cup last time, but we know how much better we can be now with the players we have.

"We've always told each other at the training camps that we want to change how the world views American soccer, and now we have the staff, the players and the resources to do that."

If he keeps going at his current rate, Dike could well soon become one of the faces of the game on both sides of the Atlantic.