Report and highlights from the Sky Bet Championship play-off semi-final second leg between Swansea and Barnsley at the Liberty Stadium as Steve Cooper's Swans draw 1-1 in second leg to reach Wembley final. Highlights of the Sky Bet Championship play-off semi-final second-leg between Swansea and Barnsley.

Swansea set up a Wembley date with Brentford as they saw off Barnsley 2-1 on aggregate in their Championship play-off semi-final.

Leading by a goal from the first leg, Matt Grimes set the Swans on their way at the Liberty Stadium with a wonderful strike late in the first half, while Cauley Woodrow's late goal led to a nervy finish and an eventual 1-1 draw in the second leg.

Steve Cooper's side are one step closer to a return to the Premier League after three years away. They face Brentford - the side that knocked them out of the play-off semi-finals last season - on Saturday, May 29.

How Swansea got past Barnsley to reach final Matt Grimes scores a fantastic goal to give Swansea a 2-0 aggregate lead over Barnsley in their play-off semi-final second leg.

The first half of the second leg followed a pattern eerily similar to the first. There was plenty of hustle and bustle from Barnsley, plenty of passing from Swansea, but nothing in the way of action until the 39th minute.

This time it wasn't Andre Ayew's left foot that did the damage, but that belonging to Grimes. The midfielder found space on the edge of the box after Brad Collins had punched away a corner, and he curled an absolute beauty inside the far post past the stranded Barnsley goalkeeper.

Valerian Ismael threw on Daryl Dike and Jordan Williams at the break in an attempt to rouse his side, but it still took until the 64th minute to finally test Freddie Woodman in the Swansea goal, as he had to scuttle across to keep out Carlton Morris' far-post header from a corner.

They did eventually grab a goal back. It came on 71 minutes thanks to a swift counter-attack, as substitute Williams burst down the right and pulled it back for Woodrow, and he swept it home from just inside the box.

But there would be no dramatic recovery, as the Tykes' remarkable adventure this season came to an end. 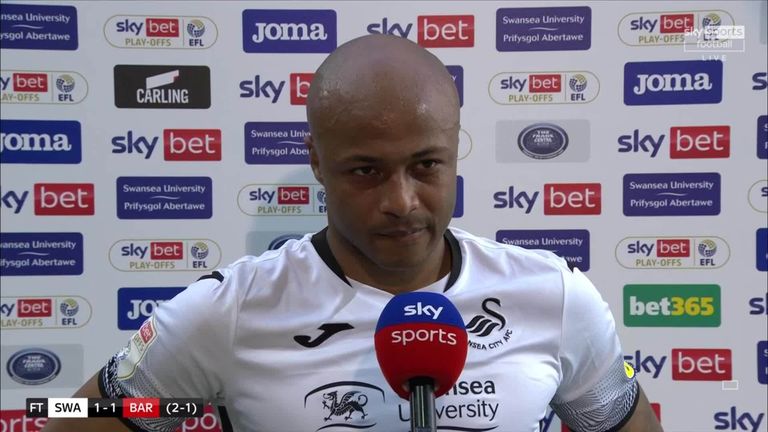 Andre Ayew says his Swansea team have worked hard all season but recognises the job is not done following them securing a place in the EFL play-off final. Steve Cooper praised the 'amazing atmosphere' with the return of crowds and believes it pulled them over the line following Swansea securing their place in the play-off final.

Swansea's Steve Cooper: "I can't say I loved the game, but I loved the result and the resilience of the players. The atmosphere was amazing. There were 3,000 supporters but it sounded like 30,000, and they got us over the line if truth be told.
"Big respect to Barnsley. It wasn't easy to get to the play-offs this year so credit to them. We approached the game in a certain way and did the job over the two legs really well. Despite being a bit nervy at the end I think we deserved to go through." 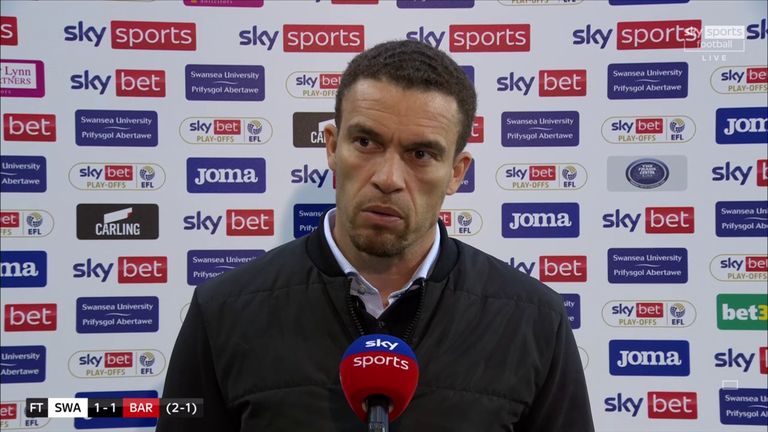 Valérien Ismaël says that his Barnsley team can be proud of their season and that they can learn a lot from their narrow defeat to Swansea in the play-off semi-final.

Barnsley's Valerien Ismael: "First of all I want to say congratulations to Swansea. They were really clinical today, with just one shot on target, and it turned out to be the winning goal.

"We can be proud, it was a fantastic journey this season and we fought until the end. Tonight we are disappointed, but from tomorrow we will have our heads up and we can reflect on how far we've come with one of the lowest budgets and youngest teams in the league.

"I just want to say thank you for the unbelievable season, and to say good luck to Swansea and Brentford for next week."

Analysis: 'The better team went through'

"I think all the expectancy was on Swansea. Barnsley came into the game with nothing to lose, were trailing from the first leg and Swansea knew they had to do a job.

"In the first half, they controlled the tempo of the game, dictated the match and how it was getting played and, to be honest, before Barnsley scored, I didn't really think Barnsley were in the game. I think the better team went through."

Man of the Match - Marc Guehi 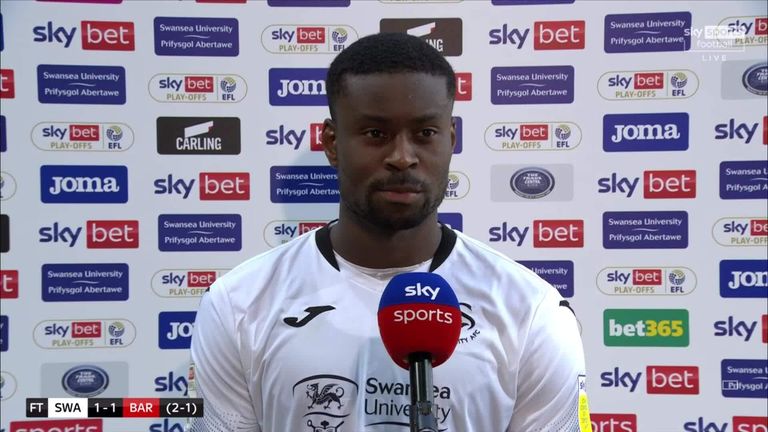 Marc Guehi says the fans were vital in helping Swansea secure a place in the EFL Championship play-off final next Saturday.

How is he only 20? Guehi was incredible again in the second leg, and didn't deserve to lose his clean sheet. He has played as big a role as any in Swansea's progression, keeping Daryl Dike and Co extremely quiet alongside Ben Cabango.

"I'm slowly becoming his biggest fan and I don't even know him. The way he defended, the way he spoke afterwards, you could see it meant something to him. He almost had tears in his eyes and he cared.

"He knows he will be back at Chelsea next year and he knows that if he can put in a performance like he has over the last two games, he will do well to keep Ivan Toney quiet in the final."

Swansea progress to the Sky Bet Championship play-off final, which takes place at Wembley on Saturday, May 29 at 3pm, while Barnsley will remain in the division for the 2021/22 season, which begins on Saturday, August 7.