With the new Premier League season upon us, Sky Sports picks out the new faces to watch with Leon Bailey, Boubakary Soumare and Bryan Gil among those preparing for their first campaign in the English top flight

The Premier League train rolls back into town this weekend and while the coronavirus pandemic continues to impact on the finances of top-flight clubs, plenty of expenditure has occurred this summer.

Manchester United have ended one of football's longest-running transfer sagas, Leicester City have acted quickly and Liverpool have confronted the lack of depth in defence.

With just over a fortnight of the window remaining, there are still several deals to look out for as Sky Sports selects eight new faces set to light up the Premier League in the coming season. Take a look at some of the best goals scored by players making their Premier League debut, featuring the likes of Sergio Aguero, Zlatan Ibrahimovic and Danny Rose. 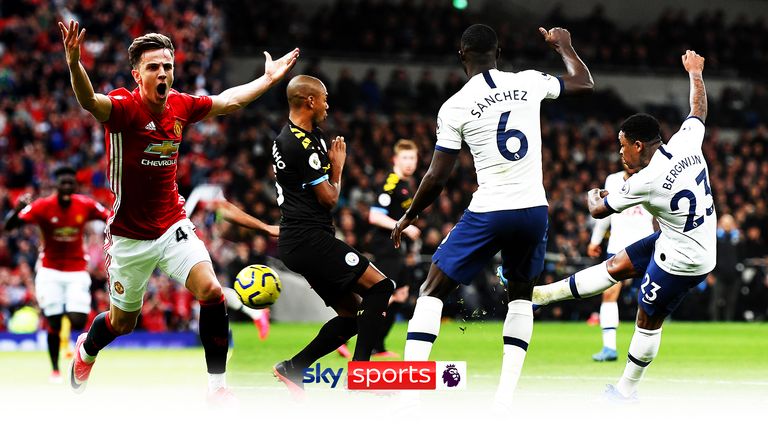 Take a look at some of the very best goals to have been scored by players making their debut, including Robbie Keane, Steven Bergwijn and Alexander Buttner.

A sum of £73million is a lot to part with for a 21-year-old, but the former Manchester City trainee has proven his credentials in the Bundesliga.

Sancho flourished with Borussia Dortmund and has shown not only does he possess the tricks and flicks, but he can score with regularity too and will link up with several England team-mates at Old Trafford.

"The chance to join Manchester United is a dream come true and I just cannot wait to perform in the Premier League," he said after completing the switch.

Sancho scored 16 goals and made 20 assists in 38 games for Dortmund in all competitions in the 2020-21 season, forming a lethal partnership with Norway striker Erling Haaland.

The winger has 22 England caps and his addition will strengthen United's right wing as Ole Gunnar Solskjaer's team look to challenge for the Premier League title after finishing second last season, 12 points behind champions Manchester City.

It was no secret Liverpool would be signing a new centre-back this summer after the defensive injury crisis which derailed their Premier League title defence last season.

Recruiting players who have learned their game within the Red Bull organisation has become a theme for Liverpool, but the Merseysiders need no extra reason to pursue Konate, of course.

This is a central defender of speed, strength and skill, who, at the age of 22, is ready to take the next step. Already there is excitement at the potential of a partnership with Virgil van Dijk. 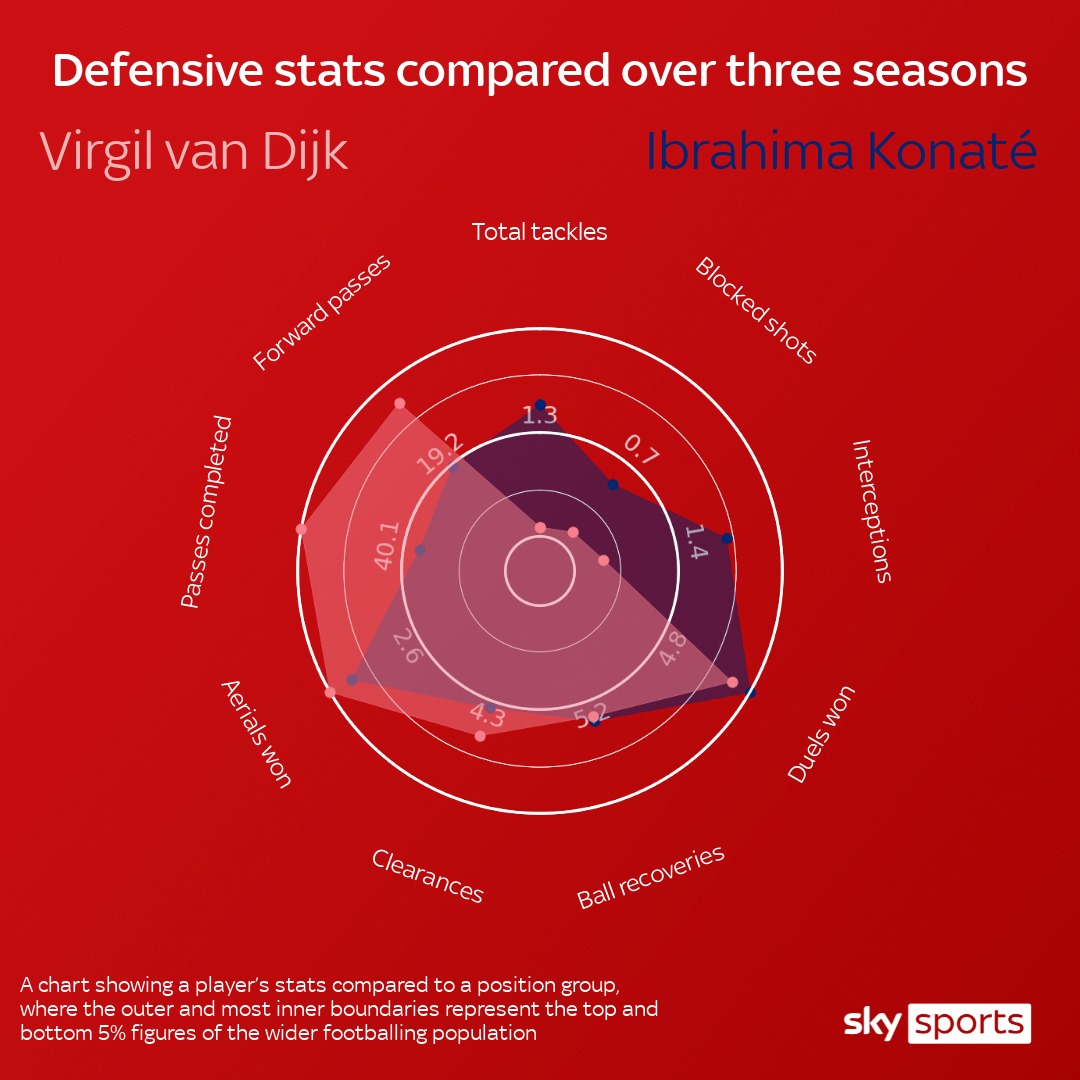 The dethroned champions will understandably be cautious with Van Dijk as he steps up his comeback but it is still not yet know when manager Jurgen Klopp will clear him for Premier League action.

With the club also easing back fellow centre-half Joe Gomez, who sustained a season-ending knee injury in November, there appears to still be some way to go before the pair are passed fit for competitive duty.

It means the focus will be on new signing Konate hitting the ground running following his £36m move from RB Leipzig.

Klopp's side won eight and drew two of their last 10 league matches to unexpectedly finished third having been seven points adrift of Champions League qualification in eighth in early March.

Konate can keep that momentum moving with some early commanding displays.

After visa delays, Raphael Varane is finally on the brink of becoming Manchester United player, and quite possibly 'the missing piece to the jigsaw' in Ole Gunnar Solskjaer's defence.

The four-time Champions League winner could be a steal in a deal rising to £41m given his experience and class.

United have been in need of a centre-back to partner Harry Maguire for some time and have not only snapped up a serial winner but at the age of 28 there is still room for the France international to grow.

Gary Neville told Sky Sports: "Varane is exciting. I think last season, every commentator, pundit, analyst and anyone who watched United said they needed a partner for Harry Maguire. They've got one now so for me it's going to be an improvement on last season.

"Varane is a good age, he's got massive experience and a good centre back alongside him and it's a good back four. He's not coming into a team where he's going to have to hold it together.

"You'd argue he's the last piece of the jigsaw in the sense that the rest of them are still doing a pretty good job. Victor Lindelof and Eric Bailly both did good jobs alongside Harry Maguire but they weren't that little bit extra that you need."

Lokonga became Arsenal's second signing of the summer transfer window after Portuguese defender Nuno Tavares, who joined the Gunners from Benfica in a deal worth around £8m.

A Belgium U21 international, Lokonga received his first senior call-up earlier this year when he was an unused substitute against Greece, and Lokonga can bring added steel to the Arsenal midfield

It's a big move for the 21-year-old, who made 78 appearances across 10 years for the Belgian club, where he played under former Manchester City captain Vincent Kompany. Arsenal boss Mikel Arteta is excited by the midfielder's potential, and it will take time for the youngster to adjust.

"It's a big step, but I feel confident because we have to be," the midfielder said. "In the football world, you have to feel confident about yourself, but I'm looking to play in this league and I can't wait to start."

When asked if he prefers to play as a box-to-box midfielder or in a more attacking role, Lokonga added: "I can play both. I can play as a six and I can play like a box to box, but people say that I'm better in the six position."

Aston Villa are rebuilding following the sale of Jack Grealish for a British record transfer fee, with a chunk of the £100m spent on Bayer Leverkusen's Leon Bailey.

The Jamaican winger scored 15 goals and 11 assists in all competitions for Leverkusen in the 2020/21 season as they finished sixth in the Bundesliga and qualified for the Europa League.

The 23-year-old has cost Villa a reported £30m on a deal running to 2025. "Leon is a hugely exciting young striker with great pace and creativity," Villa boss Dean Smith said.

"He has enjoyed a successful career at Leverkusen and we are now looking forward to watching him show his skills and talents for Aston Villa in the Premier League."

With Emi Buendia also joining from Norwich, Villa have plenty of creativity to fill the Grealish void.

It remains to be seen how Tottenham look to strengthen in the closing weeks of the summer transfer window given the ongoing uncertainty surrounding their talisman Harry Kane, but the club have already signed potential gem in Gil.

The Spain winger, who represented his country at the Olympic Games, joins from Sevilla with Argentine forward Erik Lamela moving in the opposite direction as part of the deal. Sky Sports understands the package cost Spurs around £21m.

The 20-year-old spent last season on loan at Eibar, where he scored four goals and registered three assists in La Liga as they were relegated after finishing bottom.

Speaking after signing, Gil said: "I'm very proud to join Spurs. To represent the badge of a world-class club like Tottenham and be able to play in the Premier League feels great. I'm coming to Spurs to win points and give everything in every minute." 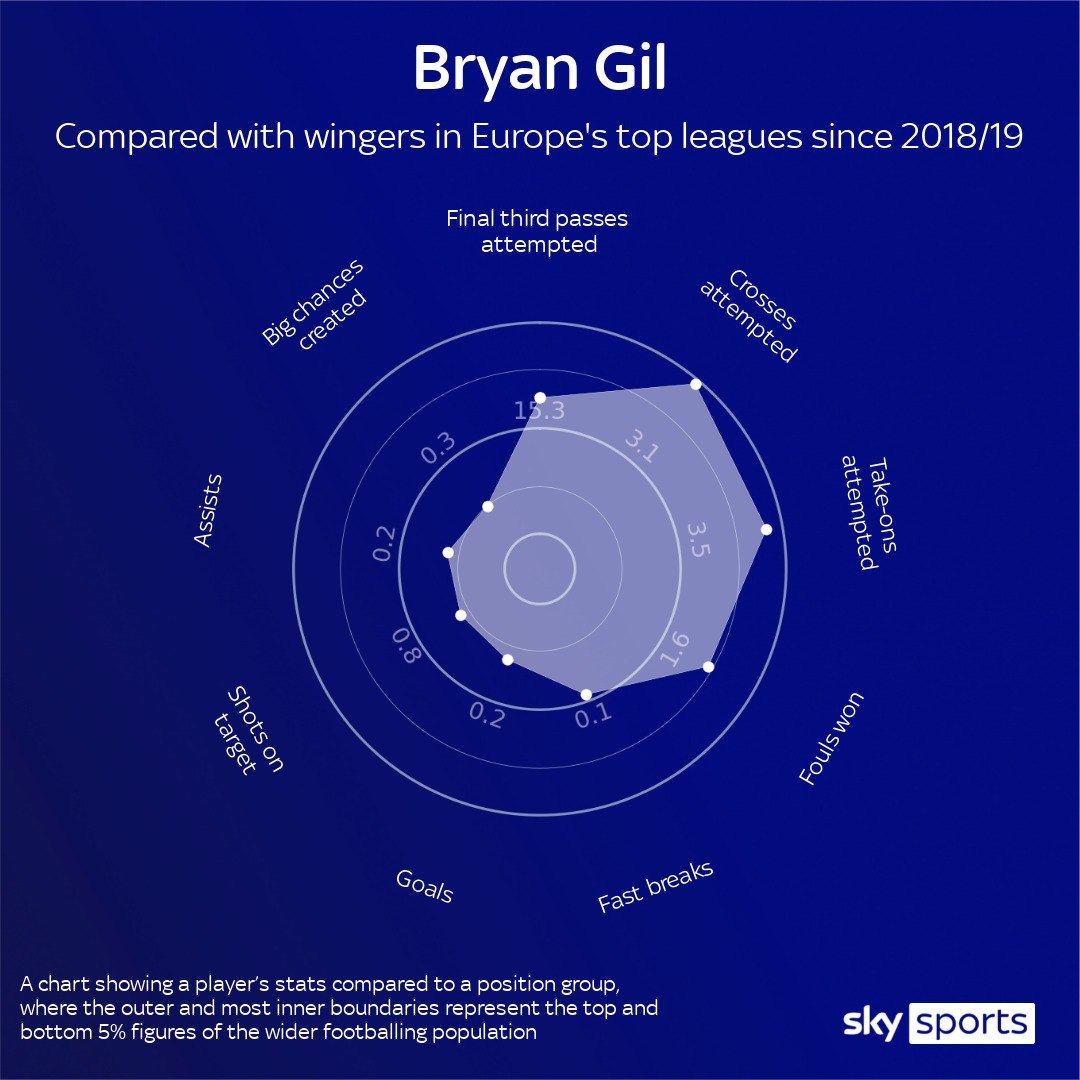 "I am excited, that's for sure. Gil was one of the most talked about players in La Liga last season and I have to say one of my favourite players.

"He was playing in a team that was struggling in Eibar, who finished bottom of the league, but this young player on loan from Sevilla was making such a fantastic impression.

"He is a player people will enjoy watching, he's an old-fashioned winger. Great at dribbling, great first touch, good passer of the ball. I am absolutely delighted Spurs have managed to sign him."

The Foxes seem to have stolen a march on their rivals once again in the form of securing Soumare after he starred in Lille's title win.

At his unveiling, the midfielder said: "I'm really proud to come to the Premier League and a big club like Leicester.

"It's going to really help me to develop my game and progress as a player, so I feel it is the right step for me. Leicester is a very ambitious club. When they spoke to me about their plans and what they wanted from me, I knew straight away I wanted to come."

It should not take Soumare long to justify his £17million price tag which was only so low due to the France Under-21 star having just 12 months left on his deal.

The one-time PSG trainee is expected to make his mark on the Premier League and is not simply a destroyer.

The 19-year-old became Patrick Vieira's first signing since becoming Palace manager and there are high hopes in South London for the precocious talent.

The attacking midfielder has been handed the No 7 shirt having played a major role for Reading last season, scoring seven goals in 46 games - a return which saw him named EFL Young Player of the season.

"It's a great club and I'm very excited to be here," the France Under-18 international said upon his arrival at Selhurst Park.

His playing style has been compared to Eberechi Eze, who will miss the first half of the season with an Achilles injury. This is a new era for Palace and Vieira will look forward to eventually combining the pair with Wilfried Zaha, spearheading the Eagles attack this season.