Plus: Joaquin Correa had a debut to remember as his late double earned Inter Milan a 3-1 win at Hellas Verona and Moussa Dembele hands Lyon first win of new Ligue 1 season 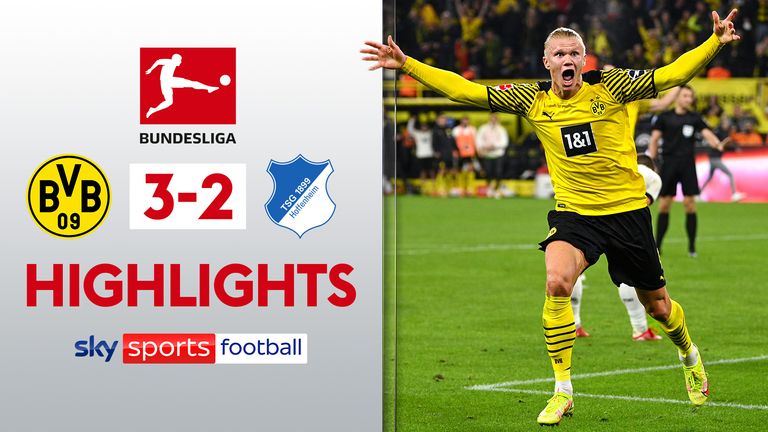 Striker Erling Haaland fired a stoppage-time winner to give Borussia Dortmund a thrilling 3-2 win over Hoffenheim on Friday that lifted them to the top of the Bundesliga standings.

Hoffenheim striker Andrej Kramaric hit the woodwork with a third-minute shot and his team-mate Oliver Baumann pulled off a great save to deny Dortmund's Giovanni Reyna as the game started at a frantic pace.

It was a sign of things to come as Dortmund withstood a barrage of crosses early in the second half before mounting an attack down the left that ended with Reyna firing home the opening goal with a bouncing shot to Baumann's left.

Hoffenheim kept up the pressure and drew level in the 61st minute when Dennis Geiger found Christoph Baumgartner with a great ball in behind the defence, and the winger drove his shot across the 'keeper and into the net.

Undeterred, Dortmund went ahead again eight minutes later as Jude Bellingham controlled a loose clearance on his thigh just inside the box before lashing the ball into the bottom left-hand corner to make it 2-1.

Munas Dabbur thought he had snatched a point for Hoffenheim with a goal in the final minute of normal time, but Haaland smashed a loose ball into the top corner a minute later to send the home crowd into raptures.

Dortmund held on until the referee blew the final whistle in the 98th minute to go top the table on six points, ahead of Wolfsburg on goal difference, having played one more game.

Substitute Joaquin Correa had a debut to remember as his late double earned Inter Milan a 3-1 win at Hellas Verona in Serie A on Friday.

Correa, who only completed his loan move to the Serie A champions from Lazio on Thursday, came off the bench to fire Inter 2-1 ahead seven minutes from time before adding a fine third in stoppage time to seal the win for his new side.

The visitors looked out of sorts in the first half and fell behind after Ivan Ilic capitalised on a poor pass from Inter goalkeeper Samir Handanovic before finishing well in the 15th minute.

Inter wasted no time in getting back into the contest after the break, with Lautaro Martinez heading his first goal of the season less than two minutes into the second half to level things up.

Simone Inzaghi's side looked like they would have to settle for a point until Correa entered the fray, earning his side their second victory from two matches at the start of the new season with two brilliantly-taken goals.

Lyon claimed their first win of the Ligue 1 season when Moussa Dembele's first-half goal helped them to secure a 1-0 win at Nantes on Friday.

Dembele found the back of the net after some nice work in the area by Lucas Paqueta as Peter Bosz's team moved up to sixth with five points after four games.

They finished with 10 men after Damien Da Silva was sent off 12 minutes from time but showed some defensive steel to grab all three points.

Nantes, who had chances before half-time, are 10th on four points.

Lyon went ahead on 35 minutes after Paqueta's strike was parried by 'keeper Alban Lafont into the way of Dembele, who poked the ball home to give the visitors a deserved advantage.

The Portuguese 'keeper was at it again just before half-time when he tipped Sebastien Corchia's free-kick over the bar.

Lyon controlled the second half although they had a scare in the closing stages after Da Silva picked up a second yellow card for elbowing Ludovic Blas.

Valencia had no problems beating Alaves 3-0 to win two straight home games at the start of the Spanish league season for the first time in seven years.

Daniel Wass scored three minutes into the match, and Carlos Soler and Gonalo Guedes added a goal each at Mestalla Stadium.

Elsewhere on Friday, Real Mallorca beat Espanyol 1-0 for its second win in a row, with Dani Rodrguez scoring the winner in the 27th minute after Espanyol's defenders failed to clear the ball inside the area.

Friday's win left Valencia top of the standings with seven points from three matches, along with Mallorca, ahead of the rest of this weekend's games.