Are Man City still favourites for the Premier League title with no striker? Why Ferran Torres could hold the key

Are Man City still favourites for the title after not signing a striker? Ferran Torres' form could be crucial but one statistic contrasting the finishing of Harry Kane and Gabriel Jesus highlights why the England captain could have made such a difference...

After back-to-back five-goal victories, no side in the Premier League has scored more goals than Manchester City this season. Pep Guardiola did not sign a striker in the summer but maybe he found one anyway. Ferran Torres looks a natural in the role.

"The last season that Ferran played was exceptional," said Guardiola after Torres' two goals against Arsenal. "If you look at his numbers in terms of goals and assists, he played incredibly well. But we discovered this position now as a striker.

"He makes movements like the best strikers who move in behind. Jamie Vardy, these types of players. He moves incredibly well. He is so young. He is an incredible finisher. Remember the goal against Norwich? It was disallowed but the finish was perfect.

"We are incredibly pleased with his movements, his work ethic, many things."

Guardiola makes a persuasive case. Since the start of April, only Mason Greenwood has outscored the 21-year-old Spaniard in the Premier League. He has more than twice as many goals in the competition as any other Manchester City player in that time.

There is nothing false about playing Torres as the nine.

And yet, none of that quite changes the fact that City made a £100m bid for Harry Kane this summer. Despite reservations, they were also willing to sign a 36-year-old Cristiano Ronaldo before United realised they had to stop that at any cost.

Sergio Aguero's departure is misleading in some respects. He contributed only four goals to the club's title win last season and the first of those was a penalty that put City three up at Fulham in mid-March. The lead at the top of the table was already 17 points.

The players who took this team to the title are still in the squad.

But Kane or Ronaldo? That would have changed things. As it is, Manchester City are without a world-class striker. What we do not know yet is how much that will matter. 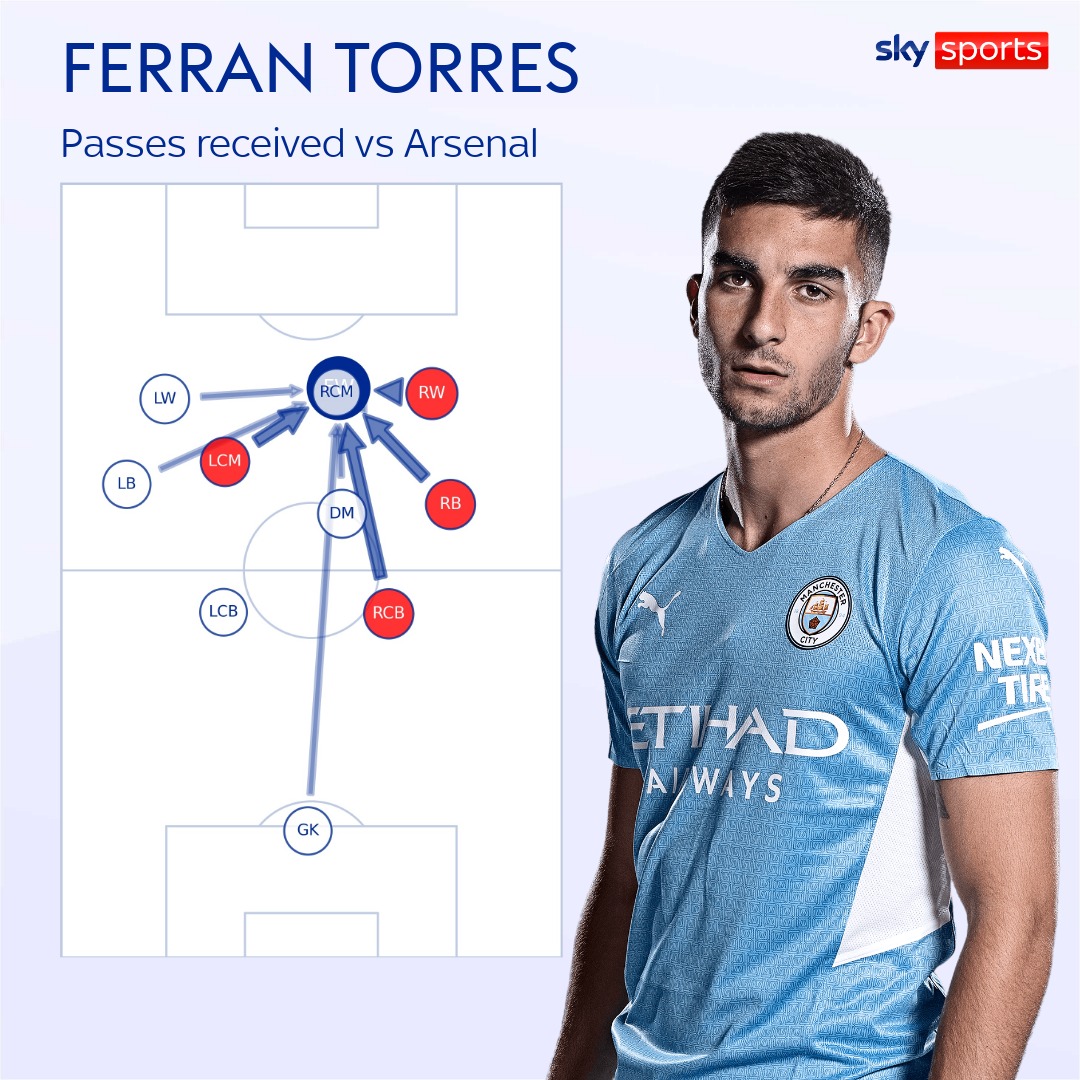 When Tottenham beat them on the opening weekend of the Premier League season it was not only a result rich in narrative but a victory widely regarded as deserved. Still, it would not have escaped Guardiola that his side had the better chances.

There was the attempt that Joao Cancelo dragged wide. The shot by Riyad Mahrez that missed the target as he stumbled when well placed in the centre of the penalty box. There was Torres' failure to divert the ball into the net from close range in the second half.

Steven Bergwijn did go close to doubling the advantage given to Tottenham by Heung-Min Son's strike but Opta's expected-goals model told another story. Spurs outscored City but their chances would, on average, yield 1.2 goals compared to City's 1.9 goals.

In other words, while the focus was on 'lacklustre' City, finishing was their biggest issue. "In general, we showed a good spirit and good intention and we arrived in the final third many times, but we could not be clinical enough," said Guardiola. "Son scores and we lose."

The conclusion that Kane's prospective club missed him more than his current one was too irresistible to ignore - and there was one statistic that highlighted that more neatly than any other. It helps to explain both his prowess and Manchester City's biggest concern.

Kane has scored 166 Premier League goals for Tottenham in the Premier League since making his debut in the competition in August 2012. That is more than any other player in that period. Impressive in itself. His expected-goals figure makes it even more so.

Based on the data collected from many thousands of attempts of the same type from the same location, we can say that, on average, a player with the opportunities that Kane had to score would have 133 Premier League goals to their name rather than 166 goals.

Kane's undoubted finishing skill, all those unerring strikes low and hard into the corner of the net, have caused an uptick of 33 goals. No Premier League player has added more to their total than might have been expected based on their chances in this time.

It does not fully explain his success - Kane's movement and skill enabled these chances and 133 goals is still a huge number. According to the expected-goals model, only Aguero had better opportunities with Kane outscoring him by five goals in this period.

That highlights two important points. Firstly, the quality of Kane's finishing. That certainly passes the eye test. Secondly, it suggests that Manchester City, as one might expect, provide a high level of service to their centre-forward. At City, the chances will come.

Aguero clearly took advantage of that - he ranks fourth on the list of players who have outperformed expected-goals the most since Kane's debut. But it is the identity of the player at the other end of the list that illustrates the challenge facing Manchester City.

Of the 1789 players to have played in the Premier League since Kane's debut, the player who ranks 1789th, the man with the biggest negative differential between the number of actual goals scored and the goals he was expected to score, is Gabriel Jesus.

The Brazilian has found the net 51 times in his Premier League career since making his Manchester City debut in 2017. But the expected-goals model indicates that he might reasonably have been expected to score at least 60 goals from the chances that he has had.

As it happens, Jesus has made a hugely impressive start to the season - a key figure in those home wins over Norwich and Arsenal, even scoring against the latter. But perhaps it is significant that he is thriving in a new role as a right-winger in this City side.

The word is that Jesus now regards that as his best position - he has played there for some time for Brazil - and that makes sense. His game is about more than goals. This is a selfless player who presses from the front and whose movement creates space for others.

But those finishing stats do rather help to explain the reluctance to trust him as the centre-forward. It is not just Torres but maybe Raheem Sterling and Kevin De Bruyne preferred there too. Cruelly, he had been dubbed the back-up striker in a team with no strikers.

That does cut to the heart of the issue. It shows why the signing of Kane would have been so impactful at City. Jack Grealish is a fine footballer but so is Ilkay Gundogan. So is Bernardo Silva. The biggest upgrade that Guardiola could have made this summer was up front.

The challenge for Torres now is to mitigate that feeling of loss, to ensure that the legend they let leave and the strikers they did not sign do not become the story of City's season. It is a lot to put on him. But he has the talent and the team around him to do it.