Jadon Sancho to miss England's World Cup qualifier against Hungary in Budapest on Thursday night; Sancho picked up a knock in training on Wednesday; Manchester United forward remains with the squad for latest matches

England forward Jadon Sancho will miss Thursday night's World Cup qualifier against Hungary after picking up a knock in training on Wednesday.

The Manchester United forward has not been risked for the match in Budapest but remains with the squad.

England manager Gareth Southgate revealed on Wednesday that Sancho was a doubt for game at the Puskas Arena.

He said: "We've got a small knock with Jadon this morning, so we are going to assess him. Everybody else I think is fine for the game."

Sancho, who missed a spot-kick in England's Euro 2020 final penalty shootout defeat to Italy in July, made his first Manchester United start on Sunday in the 1-0 win at Wolves. 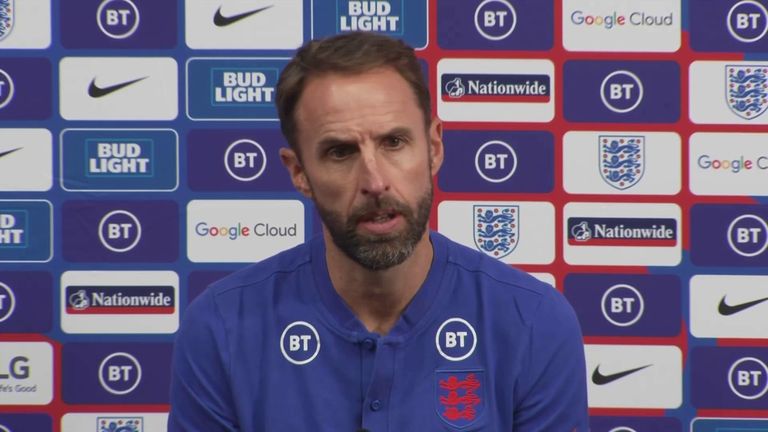 Gareth Southgate says England's World Cup qualifiers away to Hungary and Poland are 'pivotal' in their bid to reach Qatar 2022.

England top the group ahead of Hungary, and after the clash in Budapest, they face Andorra at Wembley on Sunday and then travel to play Poland on Wednesday.

He said: "I think the two away games this week are both going to be hugely challenging. They're good teams. They're obviously pivotal games in terms of qualification.

"You can't predict what your hardest games are going to be, but we know that Hungary are a very good side and sit second in the group.

"The team has gained confidence from what they achieved and the progress they've made, not only this summer, but over the last four years.

"But equally we have to start again. The journey to having the chance of another run like that in a tournament is under way. We have got to be at our very best.

"Mentally it's a good test for us. Away from home, 60,000 fans and a very good team we're playing against."