Mikel Arteta was able to hand debuts to Aaron Ramsdale and Takehiro Tomiyasu and bring back other key first-team players against Norwich: "It's been the best week or 10 days of my career in this industry." 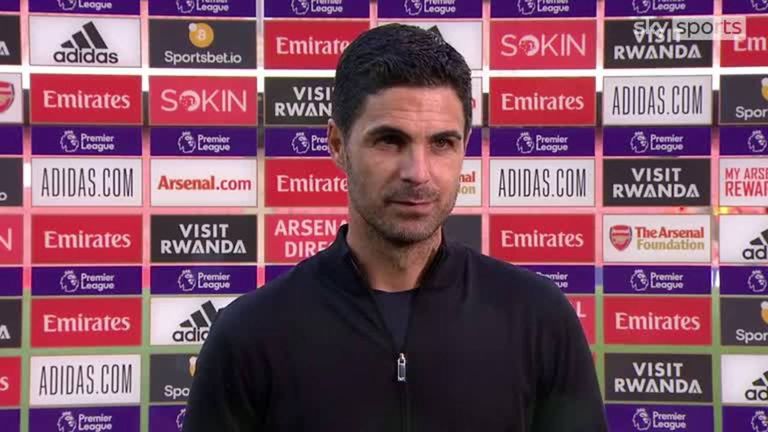 After watching Arsenal beat Norwich 1-0, Mikel Arteta hailed it as "the best week of my career" as the Gunners got their season up and running.

The Arsenal boss came into the game under the spotlight after starting the season with three defeats on the spin without scoring, and the tension was growing further inside Emirates Stadium until Pierre-Emerick Aubameyang struck on 66 minutes.

It was one of 30 shots Arsenal had on Norwich's goal in a performance that offered hope that a fruitful season could still be on the cards despite the worrying start.

Arteta made seven changes in total from their defeat at Manchester City, with debuts handed to Aaron Ramsdale and Takehiro Tomiyasu, while Ben White and Gabriel were partnered at centre-half for the first time and looked assured.

"For me, it's the been the best week or 10 days of my career in this industry," Arteta told Sky Sports.

"I am not saying they were the easiest, but I got to the game today with a real emotion inside because you learn a lot in difficult moments, who you are with. In difficult moments when you see the people and the level of organisation and the fans we have.

"From the top of the club to everybody that works with us as a team, I cannot be any prouder for what we've done.

"And then you have to win football matches and get results. That's unquestionable but that's very meaningful.

"They were ready to suffer with the team today and they were only focused on trying to give things to the team, so I am extremely grateful to them as well."

Despite Arteta's praise for the crowd, sarcastic chants of "we are staying up" rang around the home stands at the Emirates as the result lifted Arsenal to 16th place on three points from four games while Norwich, who are still looking for their first point of the season, slipped to the bottom of the table.

"It was a deserved win as well because we had chances to finish the game much earlier than we did," Arteta added.

"It was a really tricky game to play because you were playing not only the game but the emotions too and knowing what happened in the last three weeks and the games that we've lost.

"We knew that today was a must-win game. We came here and you saw the attitude of every player and I'm happy to give something to the fans as well.

"We started really crisp, really sharp, really attacking and with a high press, and after 20 to 25 minutes our rhythm broke and we started to give the ball away. We wanted to attack in one or two passes, and we were very split with big distances. We looked a little bit shaky in some moments.

"In the second half, straight away, we took control of the game and we looked like the team that was going to win the game."

Have Arsenal turned a corner? What the pundits said…

"I wouldn't say Arsenal were convincing.

"Norwich did put up a fight. They defended well, but in attack they weren't convincing. They didn't really create any clear-cut chances. It was comfortable for Arsenal.

"Meanwhile, Arsenal dominated possession without creating any real clear-cut chances in the first half. In the second half, once they got the goal, they did start to get opportunities, but they just weren't ruthless enough.

"All in all, for Arsenal's first Premier League goal of the season I don't think Mikel Arteta or the Arsenal fans will care how it came. It was just about getting the three points.

"Have Arsenal turned a corner? No, because this is a game you expected them to win without a shadow of a doubt and it should have been two or three, but you do have to credit Norwich.

"These aren't the games where Arsenal will be judged, no chance. They should beat a team like Norwich. The amount of money Arsenal have spent, they should be beating them convincingly.

"I don't think Arsenal have turned a corner. If you ask me in six or seven games' time I may change my mind, but what I will say is that when you win football matches it breeds confidence and getting the three points will give them a big lift."

A trip to Burnley is next up for Arsenal next Saturday (3pm kick off) while Norwich are back at Carrow Road for the visit of fellow Premier League newbies Watford (3pm kick off).