Dusan Vlahovic was a target for Spurs and Atletico this summer, with Fiorentina said to value the striker at more than £50m; 21-year-old has turned down Serie A club's offer of a new deal, says owner Rocco Commisso; Fiorentina must now find "feasible, appropriate solutions" he adds

Dusan Vlahovic, who was a target for Tottenham and Atletico Madrid in the summer, will not be signing a new contract with Fiorentina.

Fiorentina owner Rocco Commisso revealed the news in a statement on the club's website in which he said the Italian side had offered to make Vlahovic the highest-paid player in their history.

However, he said the Serbia striker had turned down their offer, despite a number of improvements being made, and that Fiorentina would now need to find "feasible, appropriate solutions".

Commisso said: "When I arrived in Florence, I promised the fans that I would be up front with them and that I would never make promises that I couldn't keep.

"I would therefore like to update the Fiorentina fans on an issue that has been much talked and spoken about in recent months - the question of Dusan Vlahovic's contract.

"As you know, Fiorentina made a very significant offer to the player. Our proposal would have made him the highest-paid player in the history of the club.

"We also improved our offer on a number of occasions in order to accommodate the requests of both Dusan and his entourage. However, despite our efforts, those offers have not been accepted.

"During my time in Florence over the past few weeks, I have personally endeavoured to find a solution that would make both the player and the club happy, but I am disappointed to say that our efforts and attempts have not been rewarded.

"At this point, all that we can do is acknowledge the wishes of the player and his entourage and quickly identify feasible, appropriate solutions as we proceed with this exciting new season. 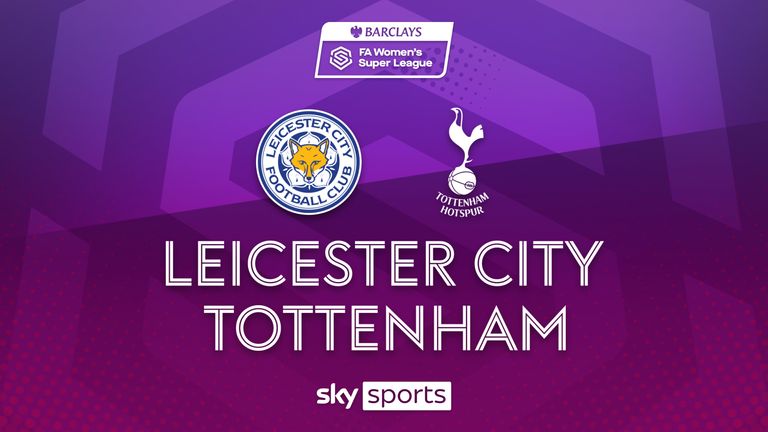 Highlights of the WSL match between Leicester and Tottenham

"In any case, Dusan Vlahovic has a contract linking him to Fiorentina for the next 21 months. We have no doubt that the player will - as he always has - do his bit to help the team achieve its objectives, showing the same level of professionalism he has shown since he arrived in Florence, with the utmost respect from our fans, his team-mates, the coach and the club as a whole."

Vlahovic established himself as one of Europe's most exciting young strikers by scoring 21 goals in 37 Serie A games last season.

Sky Sports News reported in August Tottenham were keen on the 21-year-old, who Fiorentina were said to value at over £50m, while Sky in Italy claimed Atletico had shown interest in the player.

Vlahovic, whose current contract expires in 2023, has six goals in eight games for Fiorentina this season.

Gary Neville says there would be no Premier League title contest this season had Manchester City managed to snare Harry Kane away from Tottenham over the summer.

City came from behind twice to earn a 2-2 draw with Liverpool in a breathless and pulsating Premier League encounter at Anfield on Sunday, but the game further highlighted a lack of cutting edge in the champions during a dominant first half.

Pep Guardiola saw a £100m bid for England striker Kane rejected, and while City were open to including players in addition to the cash offer, Tottenham refused to budge and Kane ultimately declared an end to the saga on August 25 by committing to Spurs for another season.

The title race is shaping up to be the closest in many years as the season enters the October international break with the top four separated by just two points, but Neville, speaking on his latest podcast, believes it would have been a foregone conclusion had City signed a recognised natural goalscorer in the shape of Kane.