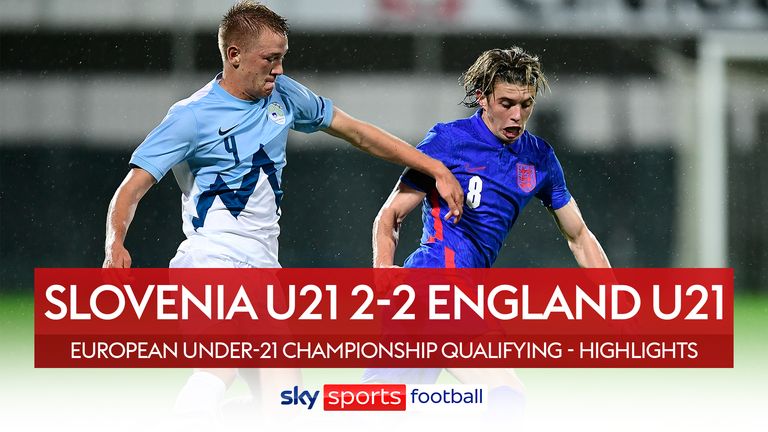 Highlights of the U21 European Championships qualifier between Slovenia U21 and England U21.

England U21s had to settle for a 2-2 draw after surrendering a two-goal half-time lead in Slovenia in Euro 2023 qualification.

Mark Spanring and Dusan Stojinovic struck in the second half, with the Young Lions forced to settle for a 2-2 draw in their Euro 2023 qualifier.

Early goals from Conor Gallagher and Cole Palmer put Lee Carsley's side in complete control before they fell apart after the break on Thursday.

It was a repeat of their 2019 friendly in Maribor where, with Carsley a coach under Aidy Boothroyd, the Young Lions lost a 2-0 lead to draw 2-2.

They now go to Andorra on Monday hoping to have Liverpool midfielder Curtis Jones available after he missed out in Celje with a knock.

But it was two crucial points dropped after the Czech Republic beat Kosovo 1-0 to sit top of Group G and Albania overcame Andorra 2-0 to push England into third.

Man of the Match: Conor Gallagher.

There seemed little danger of a Slovenia recovery at the Stadion Z'dezele as England raced into a commanding lead during a dominant first half.

After just five minutes Rhian Brewster was sent clear and was given a shove by David Zec, only for the ball to run free for Gallagher to find the bottom corner from 12 yards.

Nine minutes later Palmer made it 2-0 when Brewster just failed to connect with Luke Thomas' cross and Manchester City midfielder Palmer collected the ball to curl low past Martin Turk.

The Young Lions continued to dominate and Gallagher almost grabbed his second when he just failed to get a clean connection on Emile Smith Rowe's cross with the goal gaping.

Brewster and Gallagher shot over before half-time, but the hosts emerged with renewed vigour and pulled a goal back five minutes after the break.

England thought they had escaped when Joe Bursik turned David Bosilj's drive behind but, from the resulting corner, Palmer failed to clear and substitute Spanring fired in from 16 yards.

Arsenal’s Emile Smith Rowe was handed his first start under boss Lee Carsley and Aston Villa's Jacob Ramsey made his Young Lions debut as England U21 made two changes from September’s win over Kosovo.

The Young Lions had lost their edge as Slovenia found more fight and Taylor Harwood-Bellis was forced into a hasty clearance when the hosts seized on sloppy midfield play after 66 minutes.

But, again, it was a short-lived reprieve and Stojinovic immediately headed in Nino Zugelj's corner to complete what looked an improbable comeback at half-time.

England U21 boss Lee Carsley: "I've made it clear we need to learn. To be 2-0 up away from home against a very motivated team it's important you don't give them any lifts and hand over momentum to them. I thought we did that.

"We're still building our reputation as a team and a squad and it's important we take experiences like today. If we build on this result and use it for experience it will be a positive result for us.

"It's a team sport, it's important everyone stands up and be counted. I have a lot of faith in these players. We have to use this performance - especially in the second half - as motivation and we will be in a better place for it.

"We had two or three opportunities the second half, but I didn't feel we had the control we had in the first half."

England travel to Andorra in European Under-21 Championship Qualifying on Monday at 7pm.