Roy Keane on Phil Foden: "I love my American Football and Foden has been like a top quarterback. He's been like Tom Brady. He's just picking people out. He's got runners and he's got wide-receivers. He's making it look so easy."

Phil Foden was likened to legendary NFL quarterback Tom Brady by Roy Keane following his virtuoso display during England's 5-0 victory over Andorra in their World Cup Qualifier on Saturday.

Foden may not have got on the scoresheet but his performance was the most eye-catching of the evening as England moved a step closer to qualifying for next year's World Cup in Qatar.

The Manchester City man was playing in a deeper role than usual and was picking passes for fun.

Keane, in the ITV Sport studio, likened Foden to a quarterback, the highlight of his night arguably the fine ball over the top of the Andorra defence which saw Bukayo Saka put England 2-0 up.

"I love my American Football and Foden has been like a top quarterback," Keane said.

"He's been like Tom Brady. He's just picking people out. He's got runners and he's got wide-receivers. He's making it look so easy.

"He's been maturing well over the last year and he's been playing most weeks for Man City. He's playing in big games most weeks and in the top competition in Europe.

Foden completed 72 of his 76 passes - an accuracy of 95 per cent - created three chances to add to his assist and his 89 touches underlined how England looked to play through the Manchester City star.

The victory - celebrated by around 1,000 England supporters inside the Estadi Nacional d'Andorra, who were able to support their side away from home for the first time in almost two years - leaves the Three Lions on the brink of World Cup qualification with just three games left to play, including Tuesday's game with Hungary at Wembley.

Gareth Southgate, too, was left purring at the ability of the 21-year-old, and said: "His football speaks for itself. He is getting stronger so it is exciting for us that one of those midfield positions might be a possibility.

"He occasionally plays there for his club but more often than not it is from wide or he is the false nine so it is an interesting experiment for us as we move forward with the balance of our midfield and the different types of players, depending on the opposition as well."

"It is difficult (to predict his best position) because frankly he is one of those players who is effective anywhere across that front line. 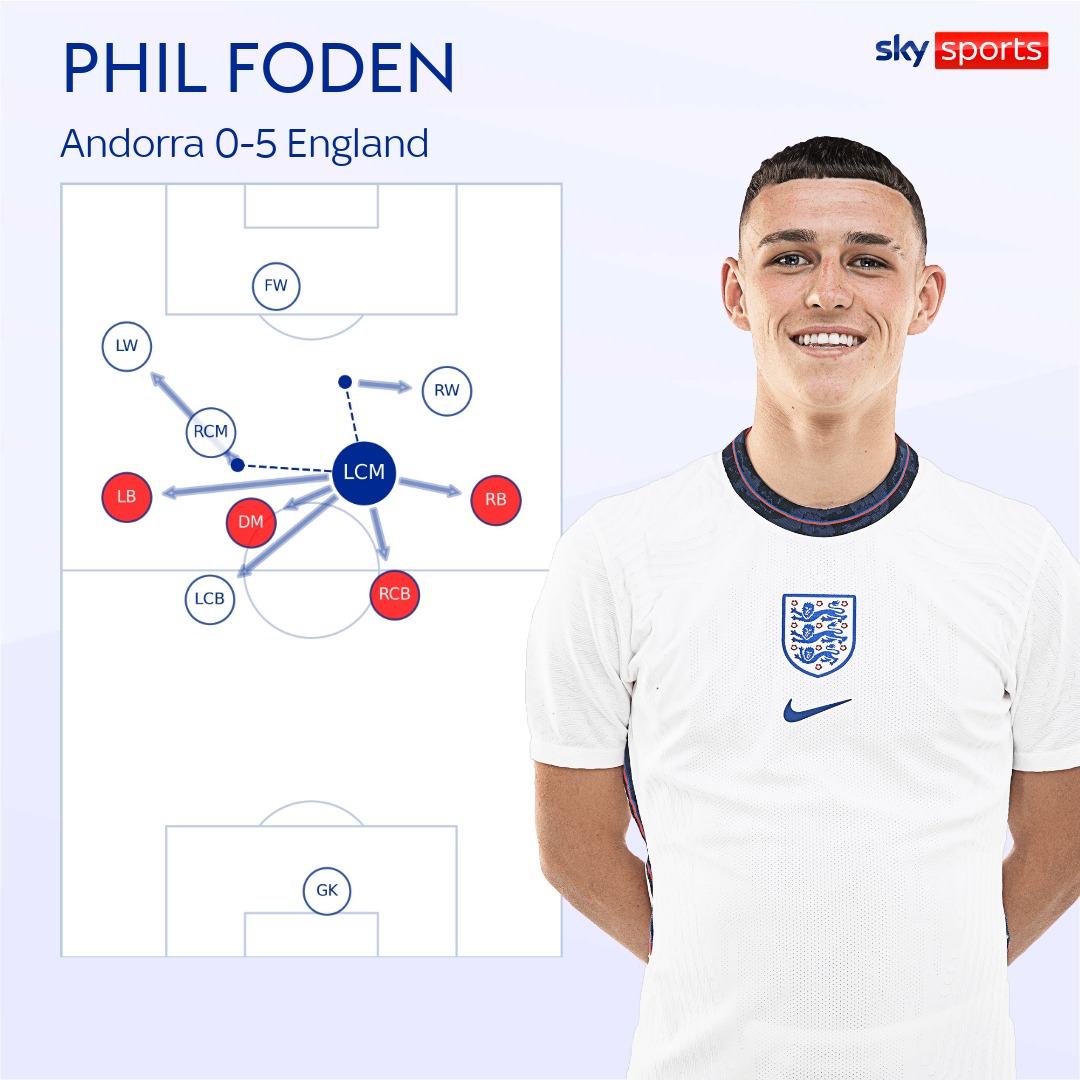 "If you play him seven, 11, 10, eight. A sort of traditional 4-3-3 midfield with a six, eight, 10, if he was the 10 within that but with the capability to drop lower and build the play at times like he did tonight.

"Part of that is just as he gets stronger as well and part of that will be the balance of the type of player who plays as the other eight and their qualities.

"Look, it's fabulously exciting isn't it? When you are trying to break down a defence as we had tonight, and you've got a player who can see the passes he sees and can execute them in the way that he did.

"The quality we know. For us it's really interesting, the possibilities with him in terms of his positioning moving forward.

"Towards the end of the game there were some lovely bits of combination - Foden, (Mason) Mount, Grealish, Saka. The type of play that our players are capable of producing is really exciting."

Wow. After his man-of-the-match performance against Liverpool, Foden delivered another one for his country. His vision is sensational, his execution usually perfect.

There had been a number of warnings before he found Sancho for the first goal, while the disguise on his pass to Saka for the second was exquisite. What a player. 9. 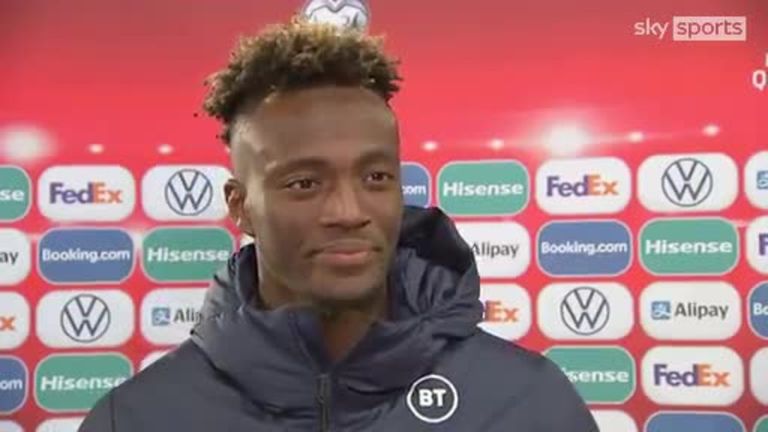 Tammy Abraham describes playing for England as "very special" and says scoring for his country was an unbelievable feeling.

Tammy Abraham believes his move to Roma has helped prove his England credentials.

The striker, who has netted four times in 10 outings for Roma after joining from Chelsea in the summer, marked his first start for the Three Lions in four years with a goal in Andorra.

"Hopefully it shows I'm clearly doing the right things and this is the start, hopefully I can keep going and keep pushing," he told ITV.

"It was a good night for me and the boys. We knew it was going to be a tough game, we had to stay focused and luckily we got the early goal." 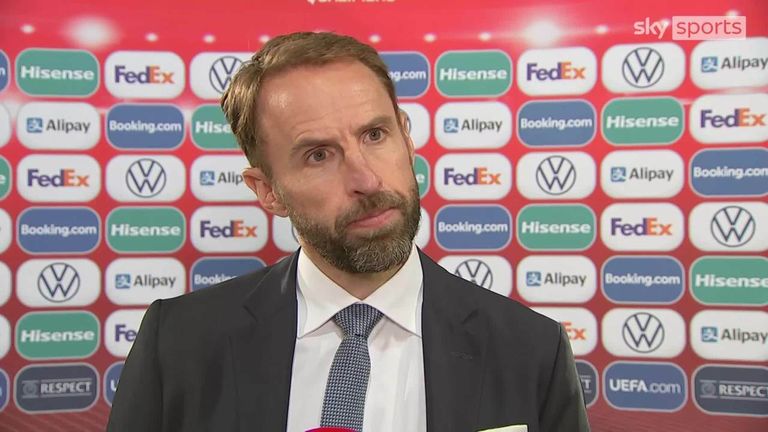 Boss Southgate told ITV: "It was a very specific challenge, a low packed defence and we picked a team with players in it who could take that challenge on. You saw that with the link play in midfield especially.

"There were some nice moments, for Chilly (Chilwell) to get a goal after having such a tough time in the summer with us, I'm really pleased for him.

"Jack's (Grealish) first goal, Tammy, Prowsey (Ward-Prowse), Bukayo (Saka) - they are all players who haven't scored that often for England so it's a special moment for all of them. "

England continue their World Cup Qualifying campaign with the visit of Hungary to Wembley on Tuesday; kick-off 7.45pm. Andorra travel to San Marino on the same evening seeking to complete a double over the group's bottom nation.