Which Premier League players could be missing this weekend due to South American internationals issue?

Liverpool, Man City, Man Utd and Aston Villa worst affected; some players will be kicking off for their countries just 35 hours before their club games are due to kick off, as the Premier League returns from the international fortnight

Up to 16 Premier League players from South America could be missing this weekend due to the scheduling of CONMEBOL's World Cup Qualifying.

Some players will even be kicking off for their countries just 35 hours before their club games are due to kick off as the Premier League returns from the international fortnight.

Though the UK government's quarantine rules have recently been relaxed to allow players to play on their return from 'red list' countries, several South American sides play their qualifiers too soon before the return of the Premier League on Saturday.

And after Brazil and Argentina stated they will not allow their Premier League players to return early, up to nine Premier League clubs could be impacted.

Which players are impacted?

Liverpool have two players in the Brazil squad for their clash against Uruguay at 1.30am on Friday morning UK time - Fabinho and Alisson - kicking off just 35 hours before they are due to play at Watford on Saturday at 12.30pm.

Watford reportedly snubbed a Liverpool request to move their meeting to an evening kick-off.

Fabinho revealed that he and fellow Brazilian Alisson might struggle to make it to Watford in time for lunchtime this Saturday, and that the club are already considering flying the pair directly out to Spain ahead of their Champions League tie with Atletico Madrid next week. 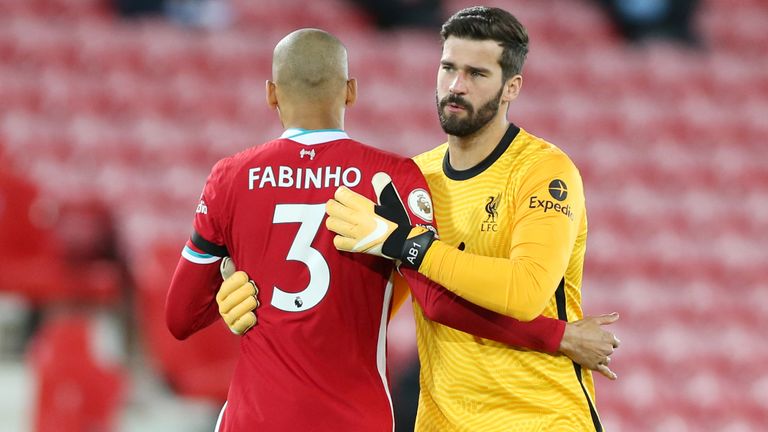 Liverpool's Fabinho does not believe he and Alisson will have enough time to make it back from Brazil duty for Liverpool's game against Watford on Saturday.

"With all of what is involved with travel, I don't know how much time we'll have between one game and the other. I believe that we won't be playing. We will also need to quarantine, but the club is still studying whether it is better to go straight to Spain to play against Atletico and quarantine there, without staying in a hotel in England."

Liverpool boss Jurgen Klopp said last month: "Obviously nobody thought about that [the scheduling] yet and it's a Liverpool problem, not a problem for anybody else. Good for Watford. I just don't know how you can do these things and nobody reacts on the schedule."

Manchester City also have two players in the Brazil squad - Gabriel Jesus and Ederson - and play at home to Burnley 37.5 hours after their national team kick off in Manaus.

Tottenham, who go to Newcastle on Super Sunday at 4.30pm, live on Sky Sports, have Emerson Royal in the Brazil squad, both Cristian Romero and Giovani Lo Celso in the Argentina squad to face Peru at 12.30am on Friday morning UK time, and Davison Sanchez in the Colombia squad against Ecuador, though that kicks off at 10pm on Thursday UK time.

Man Utd's Fred (Brazil) and Edinson Cavani (Uruguay) both have just 37.5 hours between their games and the Premier League clash at Leicester at 3pm on Saturday, Aston Villa have Douglas Luiz (Brazil) and Emi Martinez (Argentina) featuring for their countries ahead of the 3pm kick-off against Wolves on Saturday, while Everton's Yerry Mina (Colombia), Newcastle's Miguel Almiron (Paraguay), Chelsea's Thiago Silva (Brazil) and Leeds' Raphinha (Brazil) may also be impacted.

Any gap under 40 hours will surely be too small for those teams playing on Saturday, but Tottenham, Newcastle and Everton could make their players available for their Sunday fixtures.

The Premier League returns following the international break, but as always there is another chance to win £250,000 for free with Super 6. Have your say for your chance to win.

The Premier League returns following the international break, but as always there is another chance to win £250,000 for free with Super 6. With two winners in the last month and over £500,000 given away in prizes, could you be the next player to land the quarter of a million pounds?

Manchester United are searching for their first win in three following a loss and draw against Aston Villa and Everton respectively, with 62 per cent of players backing them for success. Manchester City have thumped Burnley 5-0 in the last four meetings between the two at the Etihad in all competitions, with six per cent siding with this scoreline. Have your say to win £250k.

Why has this come about?

The issue this time around is the scheduling of the CONMEBOL World Cup Qualifiers in South America, with three games sandwiched into the international fortnight - October 7, October 10 and October 14 - as they look to make up for lost time.

Covid delays meant that the 18 matchdays, squeezed into just 18 months, now had to include triple-headers in September and October, plus an extra double-header in January/February 2022.

There is some good news: this shouldn't be a problem during the November internationals, with only a double-header planned. The second of those two games finishes earlier in the week, allowing more time for Premier League players to return home.

So it's not a Covid issue?

Not strictly. Whereas in the September international break players had to quarantine for 10 days on their return from red-list countries, it was announced before this international break that players will be allowed to travel to red-list countries if they are fully vaccinated, then would have to quarantine in "bespoke facilities" for 10 days upon their arrival back in the UK.

They are allowed to leave once a day to train or play.

What will happen in January and February?

The Premier League winter break, due to take place between January 23 and February 7, won't be much of a rest for South America players, and also players taking part in the Africa Cup of Nations.

There will be CONMEBOL World Cup Qualifiers on January 27 and February 1, and AFCON runs from January 9 to February 6.

For Liverpool, that could mean up to seven players absent - Alisson, Fabinho and Roberto Firmino with Brazil, and Mo Salah, Sadio Mane, Naby Keita and Takumi Minamino at AFCON.