Match report and highlights as Celtic move top of the Scottish Premiership for the first time since August with a dominant victory over Old Firm rivals Rangers; Reo Hatate scored a first half double; Liel Abada also scored before the break; Celtic are now one point ahead of Rangers Highlights of the Scottish Premiership match between Celtic and Rangers.

Celtic blew Rangers away in the second Old Firm clash of the season to seal a 3-0 win and move top of the Scottish Premiership as the title race took another twist.

Reo Hatate gave the hosts the perfect start when he fired home from the edge of the area after just five minutes.

Allan McGregor was forced into a number of saves before Hatate doubled the lead three minutes before half-time with a curling effort after a fine Celtic move, and Liel Abada added a third before half-time (44) from close range.

Ryan Jack hit the crossbar in the second half for Rangers but Giovanni van Bronckhorst's first Old Firm game as a manager ended in a heavy defeat.

The result means Celtic are one point above Rangers and top the Scottish Premiership for the first time since August. 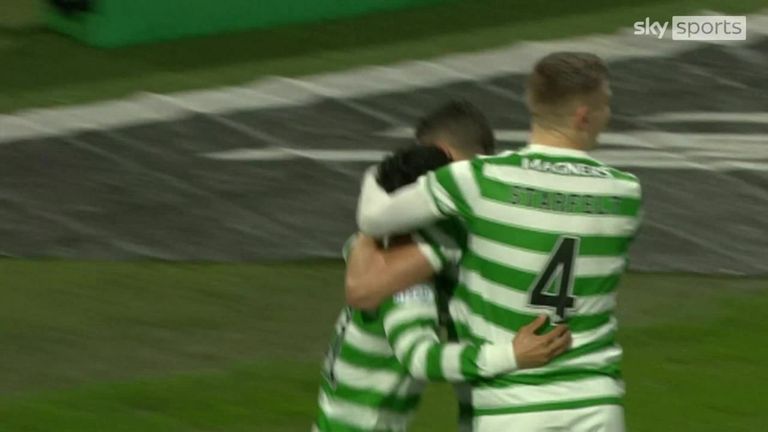 How Celtic returned to the top...

The hosts started brightly and almost took the lead after three minutes when the ball fell to Greg Taylor in the box but the defender's shot was cleared.

However, minutes later Hatate put Celtic in front as he switched the ball from his left to right foot on the edge of the box then rifled a shot into the net.

Rangers struggled to get a foothold in the game and an unbelievable double save by goalkeeper Allan McGregor in the 15th minute prevented both Jota and Giorgos Giakoumakis adding to Celtic's lead.

The Ibrox No 1 showed his quality again soon after as he stretched to turn the ball away as Giakoumakis came close to firing Liel Abada's cross in. 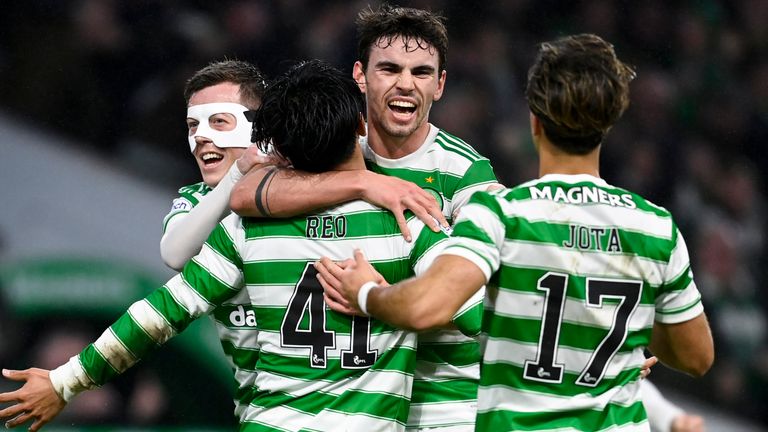 Another chance came Celtic's way in the 27th minute, Josip Juranovic curled in the ball but once again McGregor was on hand to deny Giakoumakis from six yards.

Rangers went on the counter-attack but Amad Diallo overhit his pass to Ryan Kent and Hatate was there to clear. Kent then cut in from the left and tried a shot from 30 yards but his weak effort was easily gathered by Celtic keeper Joe Hart.

A lapse in concentration from the Celtic defence almost gifted Rangers an equaliser in the 41st minute. Scott Arfield was inches from getting on the end of Joe Aribo's ball when goalkeeper Hart dived to gather.

Celtic recovered immediately and Hatate had them 2-0 up less than a minute later, the Japanese midfielder curling a lovely ball beyond McGregor.

The stadium was rocking and Abada got in on the action to make it 3-0 before half-time. Hatate looped over a cross and, with the Rangers defence sleeping, the forward stabbed the ball into the net. Liel Abada gives a Celtic a commanding 3-0 lead after a dominant first-half performance.

Rangers were so far off the pace of Celtic and Van Bronckhorst made three changes at half-time with Fashion Sakala Jr, Jack and Leon Balogun replacing Amad Diallo, Glen Kamara and Borna Barisic.

The visitors had a spell of possession at the start of the second half but still could not really threaten in front of goal.

Scott Arfield's half-volley flew over the crossbar in the 55th minute before Kent looked to set up Cedric Itten, but the striker was too slow and the ball went out for a goal kick.

Celtic could not keep up the intense pace they showed in the early stages and there was a standing ovation for Hatate when the Japanese midfielder was replaced by James McCarthy in the 73rd minute. 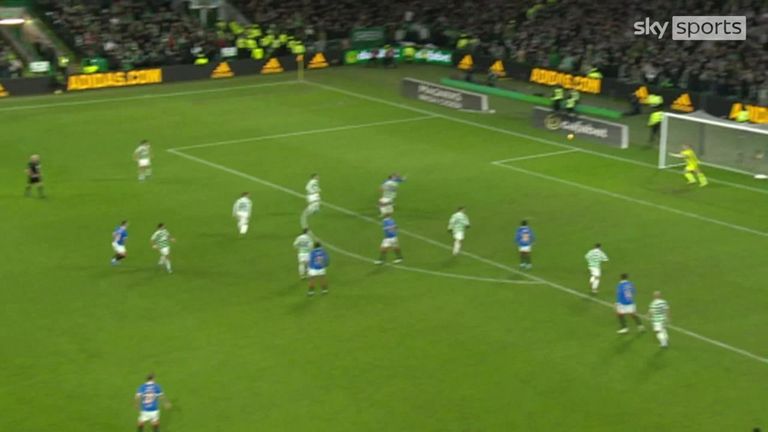 Ryan Jack tries to get Rangers back into the game, but his long-range effort clatters back off the bar.

Rangers' frustration continued to build with captain James Tavernier and Balogun picking up bookings in quick succession for challenges on Jota and James Forrest.

The visitors were unlucky not to pull a goal back with 10 minutes left as Jack burst forward and his 30-yard strike crashed off the crossbar.

Celtic then went looking for more and Rangers keeper McGregor, who was the visitors' best player, tipped Matt O'Riley's effort over the bar late on.

Man of the match: Reo Hatate

Two goals aside, the midfielder's energy in defence and attack was outstanding. Rangers could not find a way to keep the 24-year-old quiet.

He's made quite the impact since joining in January. 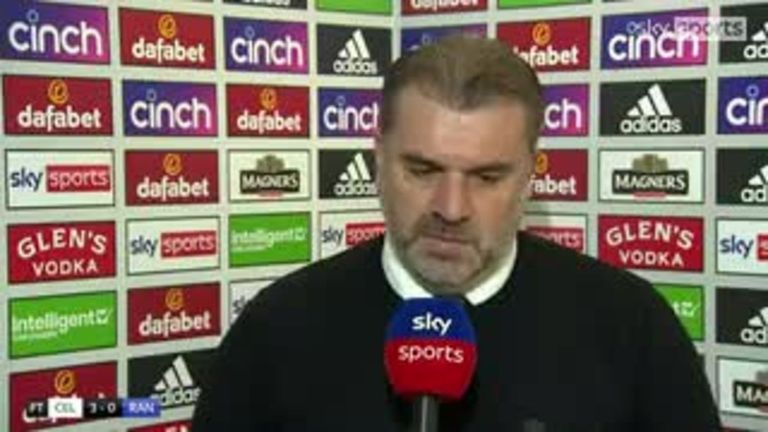 Ange Postecoglou said he was very proud of his team following their dominant 3-0 win over rivals Rangers.

Celtic boss Ange Postecoglou believes there is even better to come from his players:

"We're not the finished article. We've changed the whole team. Guys have come in without having a bedding-in process. We've got some quality players unavailable at the moment. We're going to be stronger, we have to be stronger and we want to be stronger. That's the key for us. We want to be better.

"It's a sign of our progression. We lost three of our first six games. Everyone knows how the Scottish Premiership works. We couldn't afford not to get out of that quickly. We've been under pressure for a long time. The players haven't been focused on points or position in the table. Our focus is on playing our football, whether we are first won't matter." 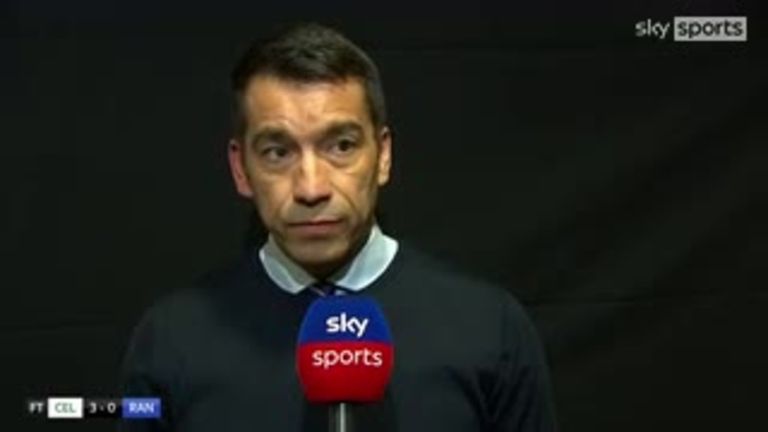 Giovanni Van Bronckhorst says that his Rangers side 'gave away the game in the first half' in their 3-0 loss against Celtic.

Rangers manager Giovanni van Bronckhorst is refusing to panic after the defeat:

"We had an honest conversation in the locker room after the game, it's obvious we weren't the way we wanted.

"These kind of games are always difficult. All we have to do is stick together and make sure we look forward and be ready for Sunday against Hearts.

"It's a very tough environment to come to, but we're not the first Rangers team to lose. I lost very big here when I was a player but we eventually became champions that year.

"Of course we wanted to win but these games don't decide a championship. We still have many games to play and we have to be ready."