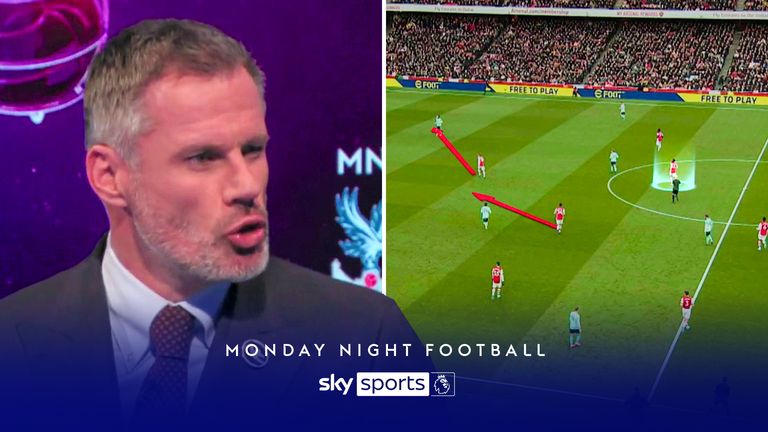 Jamie Carragher analyses the changes Mikel Arteta has made to Arsenal's midfield and the impact on their recent form.

Jamie Carragher praised Mikel Arteta for an "impressive" tactical switch which has underpinned Arsenal's resurgence - but warned it could also be exploited by Liverpool in Wednesday's crunch Premier League match.

Sunday's 2-0 victory over Leicester saw the Gunners claim a ninth Premier League victory in 11 games to move back into four place and strengthen their grip on Champions League qualification.

"I want to look at Arsenal defensively," Carragher said. "Over the last eleven games, they have only conceded seven goals. It's very reminiscent of Manchester City.

"I want to look at the pressing of Martin Odegaard and then Granit Xhaka, leaving Thomas Partey free. Odegaard is a pressing machine, along with Martinelli.

"They are really high up the pitch and Xhaka is covering 11 kilometres a game because he is being asked to do a lot more.

"But sometimes it isn't right to go [and press] and there are spaces either side of Partey. In the game against Liverpool, that is something they will have to be careful about when they press. They have to be mindful of that.

"But what l am seeing from Arsenal, and the slight tweak in midfield, is very impressive." 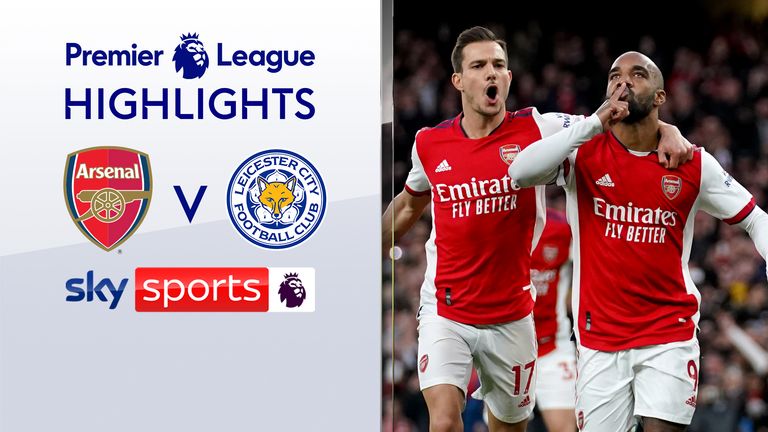 FREE TO WATCH: Highlights from Arsenal's win over Leicester in the Premier League.

Arteta cut his managerial teeth at Manchester City as assistant to Pep Guardiola, and Carragher believes there are similarities with Arsenal's recent performances and those of the Premier League champions.

"There is no doubt that over the last 10 games, Arsenal's form is as good as anyone else in the country," Carragher added.

"Arsenal's midfield is reminiscent of a Pep Guardiola team, who has obviously got a huge influence on Mikel Arteta. Manchester City so often have five players in forward positions spread across the pitch, and that spreads the opposition really wide.

"But it's the positions of Odegaard and Xhaka, who are pushed really high, which really standout, while Partey is sat really deep. It's reminiscent of Bernardo Silva, Kevin de Bruyne and Rodri at Manchester City.

"The big decision it presents to teams now is whether their centre-backs should go and engaged those advanced players, or should the midfielders look after it, and that often creates a huge gap between the opposition centre-backs.

"Odegaard's first goal at Watford produced a picture we are seeing so often with Arsenal, where that front five end up in the box.

"When Arsenal or Manchester City have these five players up the pitch they are in a position to win the ball back very quickly if they lose it because of how high up they are."

Neville: Arsenal must prove we can trust them

Gary Neville, meanwhile, explained his recent comment that he didn't "fully trust" Arsenal and said he now expects Arteta's side to clinch fourth place despite some tricky fixtures still to come.

"The reason I said about a week or so ago that you can't fully trust Arsenal is because they've not delivered yet," Neville said on Monday Night Football.

"The pressure is now on them, in the sense that there is now an expectation that they will finish fourth.

"Now they have got to go on and prove that we can all trust them, that they can go and deliver Champions League football, which was against all expectations at the start of the season."