Gueye missed PSG's win over Montpellier, citing "personal reasons", but reports in France have since claimed he didn't want to wear the rainbow colours in support of LGBT rights.

Patrick Vieira says he will "speak to" Cheikhou Kouyate if he is satisfied that the midfielder's message of support for Idrissa Gueye was because the PSG player refused to wear a rainbow symbol on Saturday.

Gueye missed PSG's win over Montpellier, citing "personal reasons", but reports in France have since claimed he didn't want to wear the rainbow colours in support of LGBT rights.

Those reports claim Gueye didn't want to back the initiative which is in aid of International Day Against Homophobia, Biphobia and Transphobia on May 17.

Kouyate and Watford's Ismaila Sarr have both since posted support for Gueye on Instagram; Kouyate called Gueye a "real man", while Sarr posted a picture of him and Gueye alongside three heart emojis and the caption "100%".

Vieira was asked about the situation after he had spoken about Jake Daniels, where he said he is heartened by the support the Blackpool midfielder has received since coming out, the UK's first male professional footballer to come out publically since 1990. 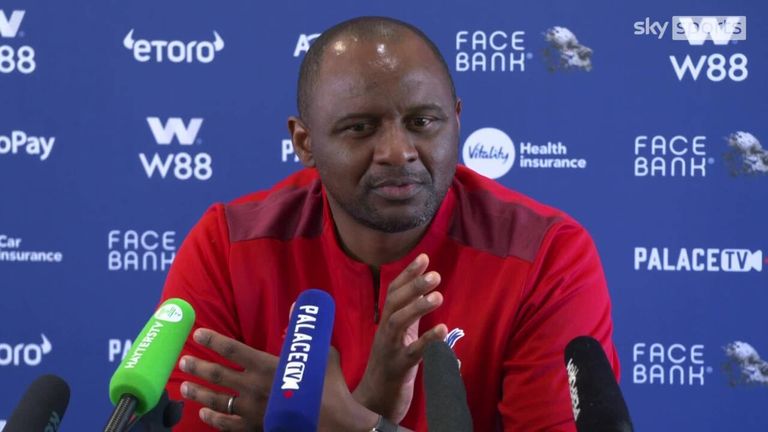 Vieira initially said: "Do you know what the support was? No, I can't tell you because I don't know. He (Gueye) refused to wear a certain shirt? Did he or Paris St Germain make a statement?

"People are assuming so before we get into conclusions, we have to be sure about what we are talking about before creating something really negative.

"Obviously what is clear from myself and the football club is we are supporting Jake and we are fighting against any kind of discrimination."

When a reporter in Palace's press conference said he had spoken to PSG, who had confirmed he'd refused to play because of the symbol on the shirt, Vieira added: "If this is the case, I will speak to Cheikhou about it. It'll be an in-house conversation."

Vieira added: "It will be a normal conversation. I will be trying to understand and I will speak to him to try to see what
that message means.

"Of course I don't know how you perceive that message but I will speak to him and try to understand."