Benjamin Mendy: Manchester City defender pleads not guilty to eighth count of rape ahead of trial

Benjamin Mendy appeared at Chester Crown Court on Wednesday; Mendy pleaded not guilty to an eighth count of rape; the Manchester City defender has already denied seven counts of rape, one count of attempted rape and one count of sexual assault. 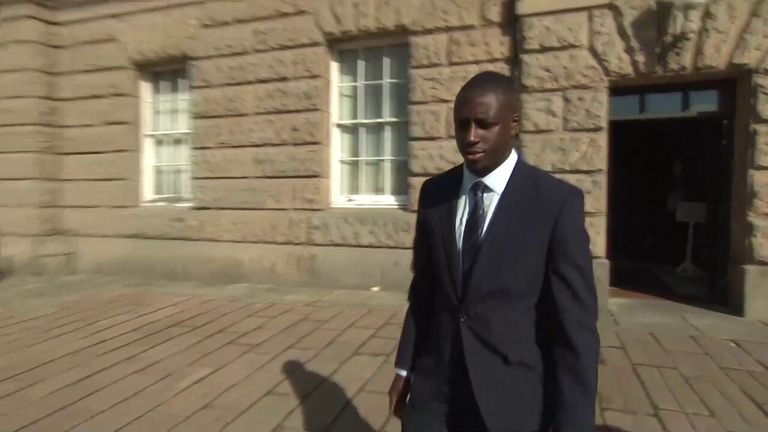 The trial of Manchester City defender Benjamin Mendy has got underway at Chester Crown Court. He denies eight counts of rape, one of sexual assault and one of attempted rape. Gary Cotterill reports.

Manchester City defender Benjamin Mendy has pleaded not guilty to an eighth count of rape ahead of his trial.

The footballer appeared at Chester Crown Court on Wednesday for his trial.

He pleaded not guilty to the 10th charge, relating to a new complainant, which had already been reported but had not previously been put to him.

The 28-year-old, who wore a blue suit for the hearing, is alleged to have committed the offences against seven young women between October 2018 and August last year.

He is due to stand trial alongside co-defendant Louis Saha Matturie, 40.

His alleged offences span from July 2012 to August last year.

About 20 members of the media were in court for the hearing on Thursday, with others watching by videolink.

A French interpreter was in the dock with the defendants.

Jury selection is expected to take place later on Wednesday.

None of the women involved can be identified and reporting restrictions apply ahead of the trial.

Mendy has played for Manchester City since 2017, when he joined from Monaco for a reported £52m.

He was suspended by the club after being charged by police.

Both defendants are on bail.