Gareth Southgate: Experience can help turn things around | Raheem Sterling: It is not time for England to panic

Southgate understands fans' concerns ahead of the World Cup and says that he needs to be judged on results: "Contracts are irrelevant in football because managers can have three, four, five-year contracts and if results aren't good enough then you accept that's time to part ways." 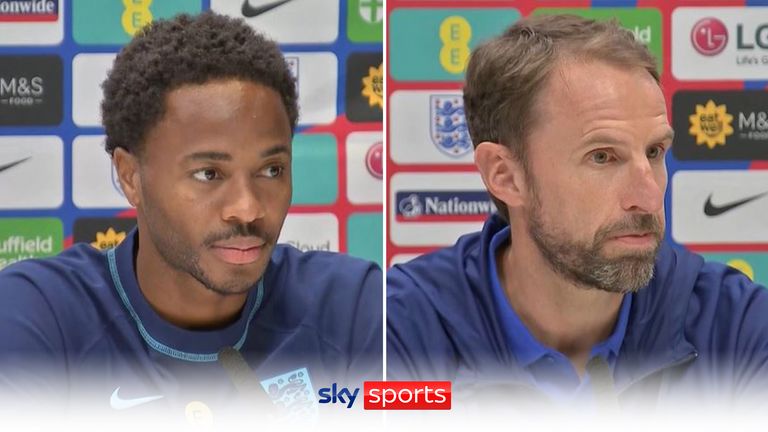 Gareth Southgate says he is aware of the media cycle as Raheem Sterling defended the underfire manager and insists it is not time to panic.

Gareth Southgate knows the negativity around him is "not healthy" for the team and urged England fans to vent any frustration at him rather than the players ahead of Monday's World Cup send-off against Germany.

England's form has deserted them at just the wrong time with Southgate's side winless in five matches, having also suffered relegation from the Nations League top tier with a game to spare following Friday's 1-0 loss in Italy.

The under-fire boss pointed to his years of experience as he was asked if he doubted himself following recent criticism.

Southgate replied: "I'm fortunate that I'm now sadly in my 50s, I have been in football for 30 years and I have gone in one guise or another to 12 tournaments, working with these chaps, scouting - this will be my seventh as player or a coach, so I have seen pretty much everything.

"The cycle of war with the media, the love-in - we are somewhere in the middle of that, it is an experience that I knew at some point would probably come with this job so I have to accept that."

Germany are the visitors to Wembley on Monday night as England look to avert a slump in performances and results which have seen the tide turn on Southgate.

He was hit with jeers and chants of "You don't know what you're doing" as England were losing 4-0 to Hungary in June and was also booed by the travelling fans again on Friday.

"Look, I'm the manager," he asserted. "The results haven't been at the level we want, that we require, so no matter what job you have in football that would be the case.

"Of course with the national team that noise is going to be louder and more widespread, I understand that.

"I'm not hiding from it, we are not enjoying it but we have to keep doing the right things every day to keep improving."

Southgate also knows his future will be dictated by England's World Cup performance rather than previous successes or the fact his contract runs until 2024.

"I am not foolish," he added. "My sole focus at the moment is to get the team right for (Monday) night.

"We're focused on a good performance, a good result, then you're looking towards the World Cup. And I know ultimately I will be judged on what happens at that World Cup.

"Contracts are irrelevant in football because managers can have three, four, five-year contracts and if results aren't good enough then you accept that's time to part ways."

Sterling: It's not time to panic

Forward Raheem Sterling jumped to the defence of the under-pressure England boss ahead of his side's Nations League clash with Germany, urging: "It's not time to panic."

Southgate was booed by some of the travelling support after the defeat at the San Siro, which ratchets up pressure and scrutiny with the World Cup opener against Iran looming large on November 21.

However, Sterling was quick to defend his manager ahead of the game against Germany at Wembley on Monday evening, citing England's run to the semi-finals of the World Cup in Russia four years ago and their runners-up finish at last summer's European Championship.

When asked about the criticism aimed at Southgate, Sterling said: "We all know that is what comes with football and playing at the highest level.

"You are under scrutiny and a lot of it is unfair, of course, but that is the level we are at with England.

"We are always under that pressure to win, and this small loss of form is not something we need to panic about. We now have a big opportunity coming up in the winter to go out and show what we can do again."

He added: "For what he has done since he has been in the job, he's taken us to a semi-final and a final, and it just shows the direction we are going in.

"Yes, we know we are not at the level we can be right now, but I still think we have positives to look at." 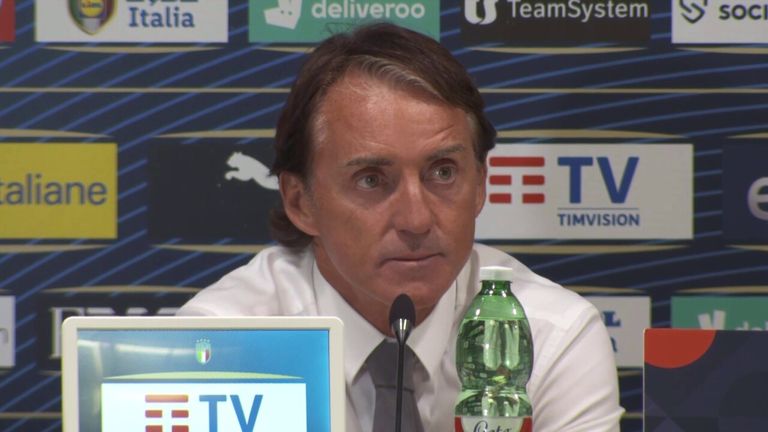 Italy manager Roberto Mancini has backed England to do well in the World Cup, despite their current poor form.

'The players need to take responsibility'

Sterling went on to admit that England, who are on their worst run of eight years, are not where they need to be at the moment and ahead of November's World Cup, and he called on the players to take responsibility as they look to turn things around and take the pressure of Southgate.

"After the summer, we all had to come away and look at ourselves. None of us were proud of those performances and I don't think it is for Gareth to shoulder all of that blame.

"We've got players in our squad that have played at the highest level, and we need to take some of that responsibility and start to put some of these performances right, and win football matches.

"That is what we are here for. We are not a country here to just take part, we want to win things. We've spoken as a collective and I think we are in the right state to put things right."

'No surprise to see Sterling back Southgate'

“It was pretty defiant from Gareth Southgate.

“He has a tricky line to walk, recognising England’s results, towards the back end of last season and against Italy at the San Siro on Friday night, have simply not been good enough and accepting the bad feeling from the supporters, who have booed him at the end of the last two matches.

“But on the other hand, he is trying to talk the players up and put a positive message out there ahead of the World Cup because it is only just over 50 days away from England playing their first game of the tournament against Iran on November 21.

"He can’t have negativity around the squad right now, so it is a difficult balance to strike. This is the most difficult time he has had in his six years as England manager, but he so also trying to remind everyone that England have done very well in the last two tournaments.

"I don’t think it is any surprise to see Raheem Sterling selected to sit alongside Southgate at the press conference because Southgate knows Sterling very well. They have been together since the U21s in 2013 and Sterling was only 17 when he was in the England U21 side.

"Southgate became somewhat of a father figure to him back then and he stood by him when Sterling was getting criticism in the early part of his England career. So, now it was a little bit of roles reversed and a chance for Sterling to talk up the England manager." 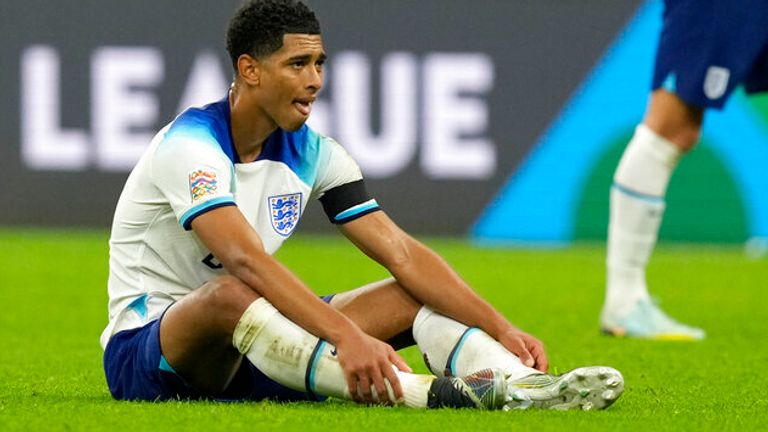 Rob Dorsett looks back at England's defeat to Italy and form heading into the World Cup.

'This is the most difficult spell of Southgate's tenure' Rob Dorsett says that while Gareth Southgate is under pressure in his role as England manager, there is no expectation that his job would be in danger ahead of the World Cup.

"This is the most difficult spell by a distance that Southgate has had to endure in his six years as England manager.

"It is a difficult time, and he is under pressure. England have gone five games without a win. They have lost two on the trot, and frankly, they are bereft of any confidence right now.

"That said, the pressure doesn't apply in terms of Southgate potentially losing his job before the World Cup. That is just not going to happen. 'That would be ludicrous of the FA to do that' was the way it was described to me because the level of insecurity and instability that would create going into a major tournament is just not on the agenda at all.

"However, it feels like this next game is a big one for England. Southgate was adamant he was still the right man to take England to the World Cup. He insists he saw a lot of improvements in that performance against Italy when quite frankly a lot of us watching didn't.

"Southgate said he didn't think the performance against Italy was far off, and he knew he was going to get criticism for saying that and there have been question marks again over his tactical decisions. Against Italy, Southgate only reacted to Italy going more direct after the goal and quite frankly, it was a pretty straight forward long ball over the top.

"But Southgate cannot legislate for top Premier League defenders not defending simple balls like the one for Italy's goal.

"It's not just Southgate, there is a malaise about this England side as a whole at the moment and too many of the key players are out of form or not playing enough football for their clubs, which is a real problem for Southgate. There are still a huge number of question marks to address for the manager."