La Liga: Barcelona decline to include a 'no biting' clause in Luis Suarez's contract

Barcelona president Josep Maria Bartomeu has declined to include a 'no biting' clause in Luis Suarez's contract.

The 27-year-old Uruguay striker joined Barca from Liverpool for a reported 94 million euros (£75million) last month but will not play for the Catalan club until October as he is the subject of a four-month ban from football.

The punishment was handed to Suarez after he bit Italy defender Giorgio Chiellini during a World Cup match, and could yet be reduced subject to an appeal lodged with the Court of Arbitration for Sport.

As things stand, he cannot train with his new Barca team-mates and could not be formally unveiled as he is banned from entering the Nou Camp until his suspension lapses.

Bartomeu revealed the Primera Division club had approached Liverpool about Suarez before the World Cup finals and stressed Barca were not dissuaded from completing the deal once the FIFA ban had been implemented. 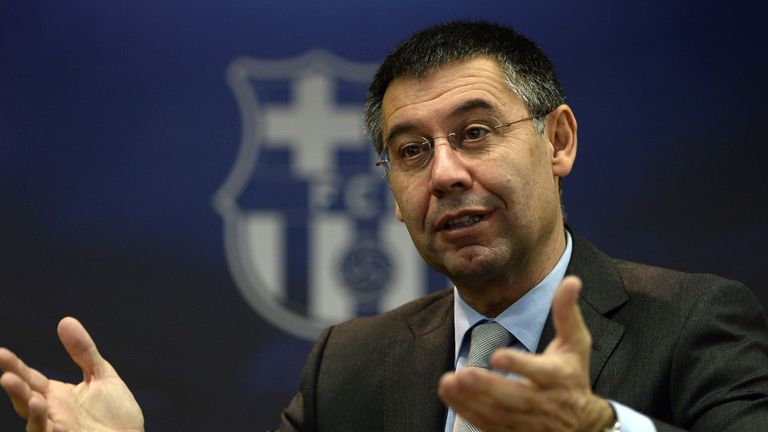 But asked if the player had a 'no biting' clause in his contract, Bartomeu told CNN: "No, there is no clause.

"If the clause did exist, we wouldn't say it, but it doesn't exist.

"We didn't rethink the decision (to sign him) and we told Luis after the bite. He knows he did wrong.

"He apologised. That's very important for us.

"That means he knows that he did not do things properly - and of course, coming to our city, coming to our club, there's going to be a way of managing Luis Suarez, because at Liverpool he was a perfect player.

Bartomeu refused to talk in hypotheses over what course of action Barca would take if Suarez did bite a fourth opponent. The forward has already bitten Otman Bakkal, Branislav Ivanovic and Chiellini during matches.

"This is now a question," Bartomeu added. "This is a question that a lot of people now ask us.

The Barca president feels Suarez is at the "perfect" stage in his career - following three free-scoring seasons at Anfield - to make a big impression in Catalonia.

"When we approached Suarez, it was before the World Cup," Bartomeu added.

"We told him that he had the right age. He had the experience. Playing at Liverpool give him incredible performance also. And it was the right time for him to come to our club, to Barcelona.

"We knew from a lot of years ago that Luis Suarez likes our club, likes our city. And we have the advantage. His agent is Pep Guardiola's brother (Pere Guardiola).

"He's from Barca in his heart, also, so everything was perfect and created the perfect atmosphere that Luis Suarez accepted.

"And we know that he had better offers than our offer but he came to Barcelona."