The 23-year-old attacking midfielder's transfer from Beijing Guoan to Bundesliga side Wolfsburg was completed on Tuesday morning with his first press conference screened live in China. 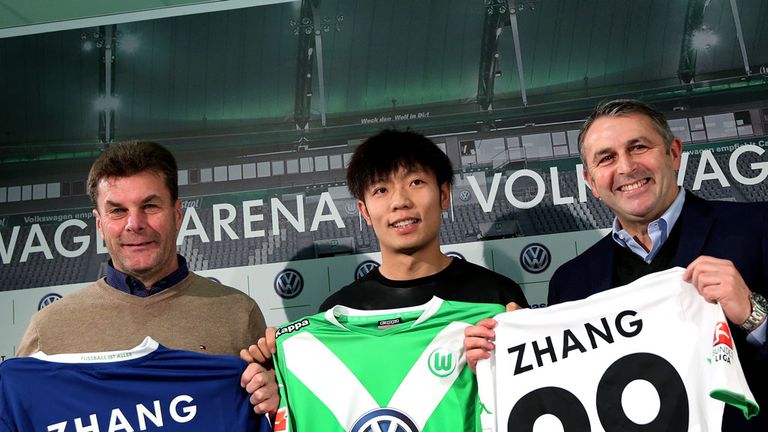 At the peak, between 40 to 50 million viewers are expected

Such is the interest at home that China's state broadcaster CCTV was due to screen Zhang's first press conference live to make use of China's prime time viewing market.

"At the peak, between 40 to 50 million viewers are expected," said a Wolfsburg press spokesman.

Should Zhang successfully transfer his Chinese Super League form to the Bundesliga, Wolfsburg will have signed a bargain.

But the club said he will be given an extended period to adjust to the physicality of German football, the culture and the language.

"He is quick and can play in all the positions behind the strikers," said Wolfsburg's coach Dieter Hecking.

"But the boy speaks no English and he has to first of all find his feet with us and get used to the level of training."

Zhang arrived in Germany on Saturday and was in the crowd to watch his new team's 1-1 draw against Paderborn on Sunday which left them second in the Bundesliga behind Bayern Munich.

Wolfsburg are on course to play in the Champions League next season and the club's website was launched in Chinese on Monday.

Zhang has made 10 international appearances for China and scored his first of two international goals in a 6-1 thrashing of Singapore in September 2013.

He scored 24 goals in 115 appearances for Beijing Gouan in the Chinese Super League, with a further 29 assists.

China's Young Player of 2012 will become the only active Chinese player in the German league, but not the first.