Bundesliga: How is German league restarting during the coronavirus pandemic?

Bundesliga to restart on May 16, including Dortmund vs Schalke derby

The Bundesliga is getting ready to restart but how is Germany planning to get back playing during the coronavirus pandemic?

The German government has given approval to the German football league (DFB) to return to action on May 16, with the number of coronavirus-related deaths in the country falling to less than 100 a day at times last week.

But with restrictions still in place across Germany, how will the Bundesliga get back up to speed with the world looking on?

When will the season actually resume?

The season will resume on Saturday, May 16 with the Revierderby, the clash between Borussia Dortmund and Schalke 04 at the Westfalenstadion, as decided by a meeting of clubs on May 7.

Previously, there had been plans for a two-week quarantine period ahead of a resumption to ensure any players or staff suffering from coronavirus had recovered, but chancellor Angela Merkel has said the country's testing capacity means this will not be necessary. "Testing is regular there, so the quarantine period is not set to 14 days," she said.

Will we pick up where we left off? 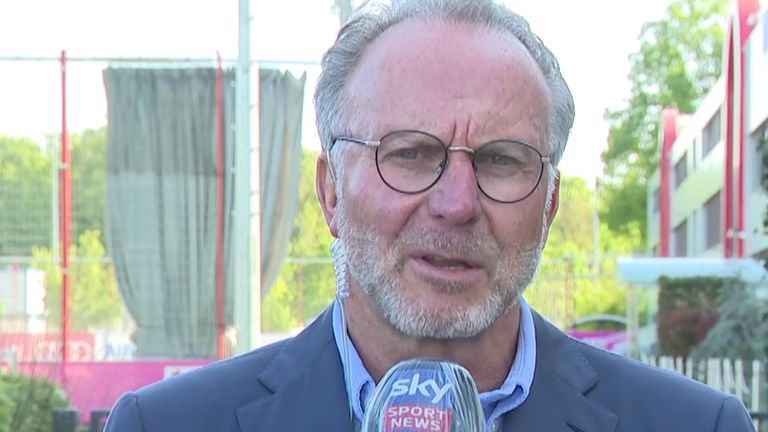 The Bundesliga was interrupted after the 25th matchday, so will pick up from where it left off - despite concerns about hosting the Dortmund-Schalke derby while coronavirus is still so prevalent, with the possibility of fan congregations, although these will not be permitted around grounds.

The other matchday 26 fixtures will be: RB Leipzig vs Freiburg, Frankfurt vs Borussia Monchengladbach, Werder Bremen vs Bayer Leverkusen, Hoffenheim vs Hertha Berlin, Fortuna Dusseldorf vs SC Paderborn, Augsburg vs Wolfsburg, Cologne vs Mainz, Union Berlin vs Bayern Munich.

How will the Bundesliga play catch-up after the delay?

The current plan is for the Bundesliga to play out its final nine games with a finishing date of June 27, with 2 Bundesliga finishing a day later. If that is missed, some players' contracts are due to expire only three days later - which would make life more complicated if the season is still ongoing.

It has been reported the DFB have hopes to play the semi-finals of the DFB Pokal, the German FA Cup, by the end of June too - which would mean fitting 10 rounds of games into seven weeks, meaning three midweek rounds may be required to meet the end-of-June date. At the moment, two rounds are scheduled, while there will be additional scope for Werder Bremen and Eintracht Frankfurt to play their games in hand.

How will the set-up work?

Much of the specifics are still to be announced but fans will not be allowed into stadiums.

Players will be tested once a week the day before games, or twice a week in the case of midweek games. If a player tests positive for coronavirus, they will be quarantined for 14 days along with anyone they have been in contact with - although it has been stressed this does not necessarily mean all of their team-mates will be quarantined too.

However, two players at German second division side Dynamo Dresden have tested positive for coronavirus, putting on hold the club's planned return to Bundesliga 2 action.

Dresden were due to play Hannover away on May 17 when the league resumes after a two-month suspension, but the entire squad, coaching and supervisory staff must go into 14 days of quarantine at home. It remains to be seen what disruption this development will cause.

There is a consideration that five substitutes may be allowed in matches, to help counterbalance the effect of fatigue from a run of nine games across seven weeks.

It has been reported players will drive to home games rather than travel together, while people carriers will bring them in small groups to away matches. It has also been reported clubs will be visited by medical professionals without warning to make sure they are observing guidelines, after Salomon Kalou was suspended for breaching protocol by Hertha Berlin last week.

Unlike in England it's relatively tightly poised at the top - Bayern Munich lead Borussia Dortmund by four points, with RB Leipzig one behind and Borussia Monchengladbach another behind them. Down at the bottom SC Paderborn are two points adrift, but 17th-placed Werder Bremen, in the second guaranteed relegation spot, are four behind Fortuna Dusseldorf, who occupy the relegation play-off spot in 16th.

Neville: Bundesliga can be 'live rehearsal' for England 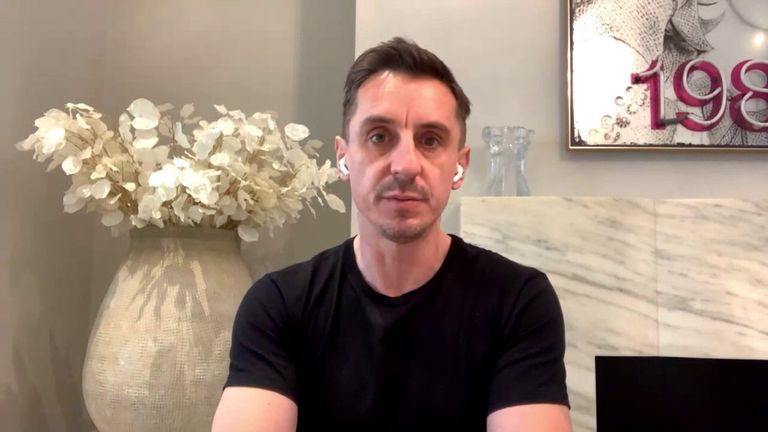 Gary Neville told The Football Show the resumption of football in Germany would work as a strong marker for the Premier League about how best domestic football can get back up and running in England.

He said: "I'll be hopeful the Premier League are on their way over to Germany somehow, to see how it operates and understand how it goes, and be in consultation with the clubs' medical professionals and doctors over there, but I can't imagine they're not.

"Even a broadcast point of view, how the media works, I'm sure Sky will be talking with our colleagues in Germany about how we deliver this.

"There's a lot of intelligence you can pick up from Germany, while those players are in the early-phase, non-contact type programmes, the Bundesliga players will be in a different programme, tackling, heading, grappling for space, and that can be a live rehearsal for what happens in England."