Watch as Alexis Sanchez celebrates strike at Stoke - does he drop a hint about his future? 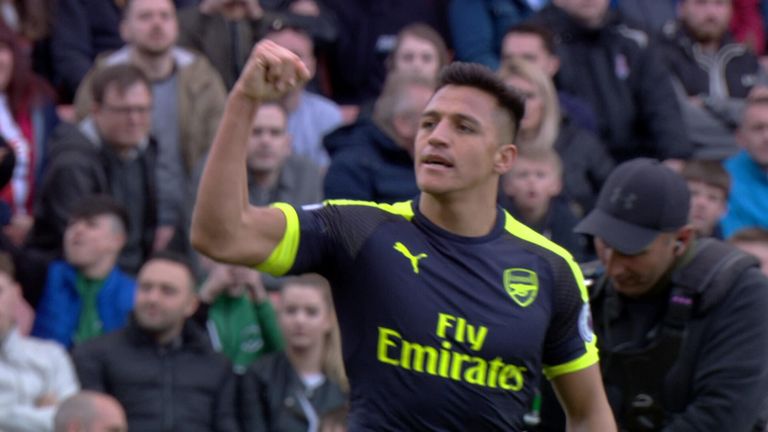 Did Alexis Sanchez give an indication of where his future may lie?

While celebrating his strike in Arsenal's 4-1 win at Stoke, did Alexis Sanchez drop a hint he will stay at the club next season?

The Gunners reignited their top-four aspirations as Olivier Giroud scored twice in the success at the bet365 Stadium, with Sanchez on target with the crucial third as Stoke were pressing for an equaliser.

Sanchez appeared to be injured in the run-up to his goal, even gesturing to the bench that he should be replaced, but still he managed to find the net from the edge of the box.

That is now 21 goals and 10 assists for the Chile international, and 50 Premier League goals since joining the Gunners. The Sky Sports studio was full of praise for his efforts.

Capture an unmissable summer of sport. More live football than ever, the British and Irish Lions tour and more.

"What an amazing player," said Sky Sports co-commenter Alan Smith. "He's a freak of nature this boy. You just didn't think he had it in him. The desire week-in, week-out, every single match he's up for the fight."

After the ball had nestled in the bottom corner, Sanchez wheeled away in celebration, and in doing so, seemed to point to the badge on his shirt, before then gesturing to imply he was staying put.

Hit the video above to see the goal and celebration and judge for yourself!