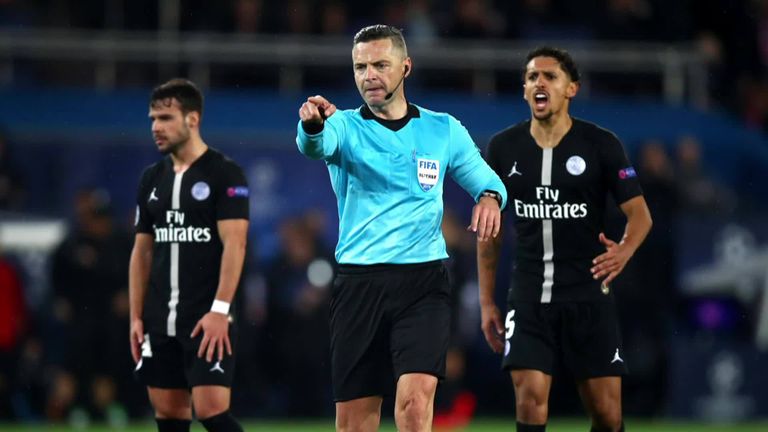 Manchester United's Champions League penalty would never be given in the Premier League, even when VAR comes to England, says Dermot Gallagher.

Former Premier League referee Gallagher was stunned by VAR's decision to award United a stoppage-time penalty against Paris Saint-Germain which saw Ole Gunnar Solskjaer's side progress to the quarter-finals on Wednesday.

PSG defender Presnel Kimpembe was penalised for handball in the final minute as referee Damir Skomina ruled he had blocked Diogo Dalot's shot with his arm.

"I didn't think it was a penalty," Gallagher said. "I would be pretty annoyed if I was a defender and that was given against me.

"If you look at it, it's struck the defender on the arm, there's no doubt about that but his arm is so close to his body, he's turning away, I don't think he had any intention whatsoever of doing anything but getting out the way of the ball.

"For me, I'm very surprised it was given."

Fellow former Premier League referee Mark Halsey agreed with Gallagher, posting on Twitter: "Law 12 H/B irrespective of where arm/hand is positioned doesn't necessarily mean an offence has been committed there has to be a deliberate movement of arm/hand towards the ball, [in my opinion] VAR should have never got involved, referee has to be strong and stick with his original decision."

VAR is set to be introduced in the Premier League next season following its arrival in the Champions League for 2018/19, while it was also used last summer in the World Cup in Russia.

"The Premier League are testing (VAR) at the moment. They're testing week in week out. I just think that next season they'll go 'Yeah, we'll give a corner because it's too close, his arms are in and we'll just move on'.

"I haven't spoken to anyone this morning who thinks that's a penalty."