Jack Grealish exclusive: It's time for me to deliver to keep Aston Villa in Premier League

Villa sit 19th in the Premier League, two points from safety but with a game in hand

Jack Grealish insists the onus is on him to deliver in the final 10 games to keep Aston Villa in the Premier League, and it's something he thrives off.

Grealish has been Villa's star player this season but sees his side 19th in the Premier League, two points from safety but with a game in hand.

So often Villa's talisman, captain Grealish is relishing the weight on his shoulders in the final weeks of the season, and says the fact all remaining games will be on TV makes that pressure even bigger and better.

Asked by Gary Neville on Wednesday's The Football Show if this is the moment for him to deliver, Grealish said: "Definitely. I think obviously everyone is going to be watching these games on TV, and I feel I thrive off that, the big games everyone is watching.

"We have 10 very important games, and I think the first will be most important - if we end up winning that, it instantly takes us out of the bottom three. Everyone knows our tough run-in, but we are all confident and have come back as fit as ever.

"I don't want to say this in an arrogant way, but I embrace [the pressure]. I love the fact it's like that, if I'm honest. Being the local lad and captain of the club, I absolutely love it and try to take it in my stride which I think I have done this season.

"We're going straight into a relegation battle, but we're all focused on that and we're all ready. We've been having Zoom calls twice a week, both about tactical things and the mental side of things.

One positive for Aston Villa during the coronavirus postponement has been the recovery of John McGinn, Villa's Player of the Season in 2018/19.

Having broken his ankle in December, McGinn is now fit, and Grealish says the boost will be felt on the pitch as well as off it.

"He's going to be massive. I think he was probably one of the top players in the league before he got injured; I even spoke to some players at other clubs, who couldn't believe how good he was.

"He's one of those players who you don't appreciate how good he is until you play with him, everyone in our changing room would say that. I think it will be massive, his legs in midfield I feel like we've lost since he's been injured, and obviously he has a certain type of way about himself. He has class as well.

"In the actually changing room he's a big influence, a very popular figure, so it'll be massive to have him back."

'I base my game on De Bruyne'

Asked by Neville who Grealish wants to emulate in the coming years, the 24-year-old instantly said Manchester City's Kevin De Bruyne, saying he is up there with the best in the world at present.

"De Bruyne! I just love him. I think he's unbelievable, and I probably try to base my game on him a little bit, especially when I play at No 8.

"I think De Bruyne has absolutely everything. He has that much stuff, he doesn't get enough credit. He's probably the best player in the Premier League, and is up there with Lionel Messi, Cristiano Ronaldo and Kylian Mbappe at the moment." 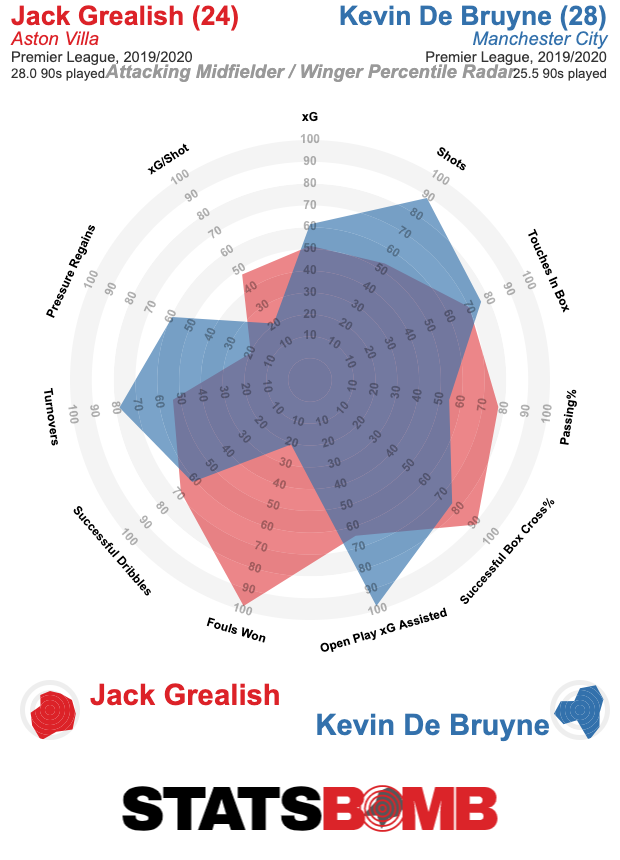