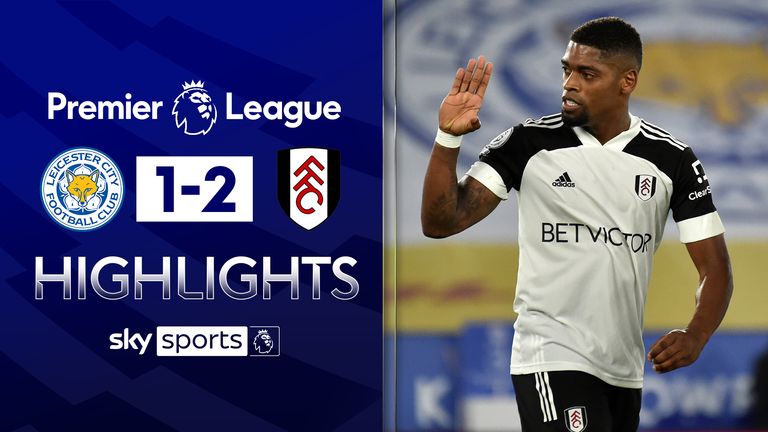 FREE TO WATCH: Highlights from Fulham's win over Leicester in the Premier League

Fulham put their recent penalty woes behind them as they stunned Leicester with a shock 2-1 victory at the King Power Stadium to move out of the relegation zone.

Heading into the Monday Night Football contest, Fulham had missed their last three spot-kicks in the Premier League, with one Ademola Lookman's embarrassing 'Panenka' attempt at West Ham.

However, Lookman put that behind him to race clear and finish past Kasper Schmeichel to give the visitors the lead in the 30th minute before Ivan Cavaleiro, who missed Fulham's last penalty against Everton, banished the west London club's penalty misery with an emphatic finish into the top corner (38) after Bobby Decordova-Reid was fouled by Christian Fuchs in the area.

3 - Ivan Cavaleiro is the first player to score a Premier League penalty for Fulham since Aleksandar Mitrovic against Leeds in September, having missed each of their previous three spot kicks in the competition. Relief. #LEIFUL pic.twitter.com/f7DUcElne6

Foxes boss Brendan Rodgers sent on Harvey Barnes and Cengiz Under at half-time and the former gave Leicester a glimmer of hope in the 85th minute, but, despite late pressure from the hosts, Fulham held on for their first away win of the season.

The victory moves Scott Parker's side out of the bottom three to 17th, while Leicester, who missed out on the chance to move level on 21 points with Tottenham and Liverpool at the top of the table, stay fourth.

How Leicester paid the penalty against Fulham...

Things might have been different at the King Power Stadium had the woodwork not denied Leicester twice in a matter of seconds.

Youri Tielemans first-time volley travelled through a crowded penalty area only to strike the post. The rebound fell for Wesley Fofana, and his shot beat Alphonse Areola but the ball clipped the crossbar and stayed out.

Man of the match: Ademola Lookman.

It was the slice of luck that Fulham needed as they took control of proceedings before taking the lead.

Andre-Frank Zambo Anguissa burst forward, drawing a challenge from Fofana before slipping the ball through to Lookman, who calmly finished past Schmeichel for his second goal of the season.

Lookman celebrated his side's opener by lifting a Senegal shirt in tribute to former Fulham midfielder Papa Bouba Diop following his death over the weekend.

Leicester were stunned and Parker's side grabbed a second eight minutes later.

Decordova-Reid went down under Christian Fuchs' challenge in the box , but referee Simon Hooper allowed play to continue. VAR Darren England eventually stepped in and Hooper awarded the spot-kick after consulting his pitchside monitor.

Cavaleiro emphatically scored the penalty having missed from the spot in last week's defeat to Everton, firmly putting Fulham's penalty woe behind them and sending them into the break with a two-goal advantage.

The Cottagers had missed five of their previous eight Premier League penalties.

Leicester boss Brendan Rodgers sent on Under and Barnes as the hosts searched for a way back into the game.

However, the visitors stood firm and could have even extended their lead when Ruden Loftus-Cheek's shot was deflected over and Schmeichel denied Lookman a second with 16 minutes left.

Barnes eventually pulled a goal back with four minutes remaining, smashing Jamie Vardy's knockdown into the top corner, but it only proved to be a consolation as Fulham held on for an important away win.

Leicester boss Brendan Rodgers: "It was a disappointing first half for us. We were not very good in our counter pressing. We made mistakes in our defensive moments and in this league, if you give away opportunities, it can be very difficult.

"In the second half, we were a bit better but did not show enough creativity. Fulham deserved to win - they punished us, and we weren't good enough to break them down. 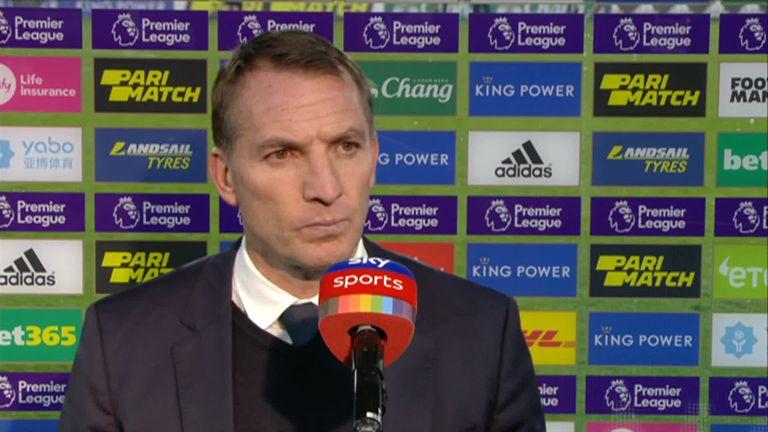 Brendan Rodgers says his side made mistakes and were punished by the better team.

"We're a young side and we've had some very good performances. Evenings like this show the youthfulness of the team and we've still got work to do. We're not good enough to be complacent in this league. Fulham have good counter-attacking players, a bit more rest than us after our European game. We're a very honest group with a great spirit and we're just not good enough to win today.

"We'll go away and analyse how we could be better, but we can't dwell on it for too long. Games come around quickly. We've shown some good moments in the first 10 games but now we'll need to dust ourselves off and get ready to go again."

🏟️ Leicester have lost 4 of their last 6 PL home games (W2), as many defeats as they had in their previous 24 at King Power Stadium (W15 D5) pic.twitter.com/q88OTTsyqe

Fulham boss Scott Parker: "I'm delighted with the team's efforts. With where we are, we're judged on our results. It was a battling display, some magnificent performances and some real quality as well.

"The players took on a lot of information and followed it to a tee. Our counter threat was obvious throughout and Ademola Lookman's strike was a great goal and a well-taken one.

"We limited Leicester to very few chances. We're a little disappointed with the goal but in the second half, we knew we'd come under a bit of pressure, but you've got to enjoy that. 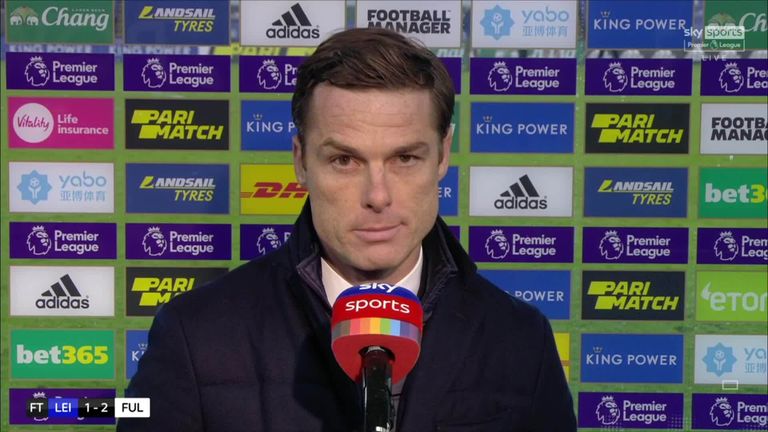 "Our last six/seven games have been positive. This is a big win for us, we need to keep pushing and we'll keep going in the right direction."

On Fulham scoring a penalty after his side missed their last two: "I was very pleased and relieved for Cav [Ivan Cavaleiro] that he scored. We've missed some big penalties and it's cost us some big points, but we've scrutinised everything possible and I'm pleased it worked today."

Man of the match - Ademola Lookman

His pace and trickery gave Leicester plenty of problems all night, and he showed a calmness in front to goal to score his side's opener.

He has now been directly involved in two goals in his last two Premier League games (one goal and one assist), as many goal involvements as in previous 34 appearances in European league competition.

Fulham have lost just one of their seven Premier League games against Leicester (W3 D3).

Leicester have lost consecutive Premier League games against sides starting the day in the relegation zone for the first time since November 2014; Indeed, the Foxes have lost three of their last four such fixtures (W1), as many defeats as in their previous 27 (W14 D10).

Fulham have won a Premier League game against a side starting the day in the top four of the table for the first time since March 2013 (a 1-0 victory at Tottenham), having lost 14 of their last 15 such matches (D1).

Leicester manager Brendan Rodgers suffered his first ever managerial defeat against Fulham in the Premier League, having won each of his previous seven against the Cottagers in the competition.

Leicester travel to Zorya in the Europa League on Thursday night; kick-off at 5.55pm. They then visit Sheffield United on Super Sunday, live on Sky Sports Premier League from 2pm; Kick-off at 2.15pm.

Fulham's next league game is on Saturday, with a visit to Manchester City; Kick-off at 3pm.