Match report and free highlights as Granit Xhaka sees red and Pierre-Emerick Aubameyang scores an own goal to consign Arsenal to a 1-0 loss to Burnley at the Emirates Stadium; Gunners have one win in last eight Premier League games 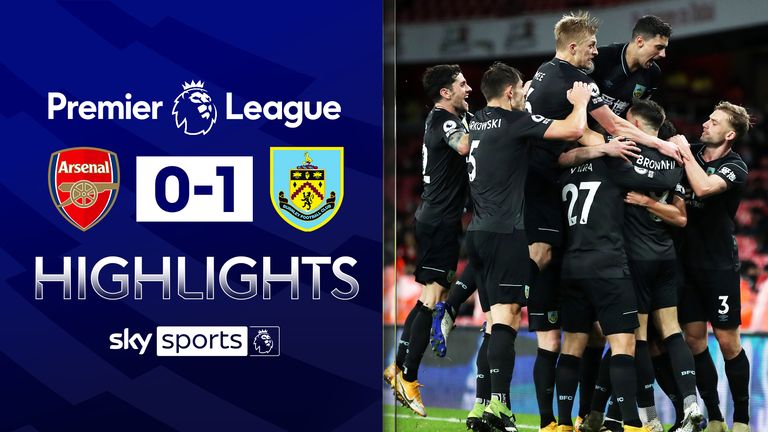 FREE TO WATCH: Highlights from Burnley's win over Arsenal in the Premier League

Granit Xhaka was sent off for violent conduct and Pierre-Emerick Aubameyang scored an own goal as Arsenal's dismal season hit a new low with a 1-0 loss to Burnley at the Emirates Stadium.

Xhaka was shown a straight red card following a VAR review after he grabbed Ashley Westwood by the throat early in the second half, and Arsenal's evening went from bad to worse when Aubameyang headed a Burnley corner into his own net (73).

The 10-man hosts tried to rally in the closing stages, with Bukayo Saka seeing a goalbound effort headed over the bar by James Tarkowski, but Burnley held firm to claim only their second Premier League win of the season.

For Arsenal, the defeat extends a dreadful run of form, leaving them with only one win from their last eight Premier League games. It is the first time since 1959 that they have lost four consecutive home games in the league.

The Gunners appeared to be gaining the upper-hand after the interval at the Emirates Stadium, with Nick Pope making a string of saves following a blunt first-half display from the hosts, but Xhaka's moment of madness changed the course of the game, piling the pressure on manager Mikel Arteta.

Arsenal came into the game seeking to secure a victory which could transform their season, but Arteta kept faith with his under-performing senior players, making only one change from the defeat to Tottenham as Mohamed Elneny replaced the injured Thomas Partey.

The side's lack of confidence was apparent throughout the first half, most notably when they failed to capitalise on a flurry of chances in the 12th minute.

Man of the match: Nick Pope.

First, Alexandre Lacazette failed to connect properly when well placed to score from Willian's downward header. The loose ball ran to Bukayo Saka, who was unable to direct his shot on goal, and it then fell to Aubameyang, whose deflected strike hit the side netting.

Arsenal were fortunate not to fall behind barely a minute later, when the unmarked Chris Wood headed wastefully wide from a right-wing Burnley cross.

It was a let-off for Arsenal, who again struggled to break their opponents down at the other end, relying too heavily on hopeful crosses from the flanks.

On the only occasion they did pass their way through Burnley in the first period, Alexandre Lacazette shot too close to Pope from eight yards out, allowing the Burnley goalkeeper to make a smart save.

Arsenal started the second period with far greater attacking intent, but they continued to waste chances as Pope made a string of further saves.

The Burnley goalkeeper denied Kieran Tierney, Aubameyang and Saka in quick succession, and the Gunners went close again when another effort from Aubameyang, this time from just outside the box, took a deflection and looped narrowly past the post.

The 2,000 Arsenal fans in the stands showed their appreciation for their side's improvement, but suddenly the Gunners were reduced to 10 men.

A furious Xhaka first confronted Dwight McNeil after fouling the Burnley winger, then clashed with Westwood. He was initially shown a yellow card, but referee Graham Scott upgraded it to a red after seeing that the Arsenal midfielder had raised his hands to Westwood's throat on the pitchside monitor.

Arsenal were perhaps fortunate not to be reduced to nine men when Elneny was only shown a yellow card after he raised his hands to the face of James Tarkowski before a corner later in the second half, but when the set-piece was eventually taken, they fell behind.

Aubameyang, in poor form with only one goal in his last 11 Premier League appearances, inadvertently flicked the delivery into the far corner of his own net after rising at the near post with Jordan Brownhill.

Arteta's men pushed forward in search of an equaliser in the closing stages, but they could not break Burnley down.

The final whistle was greeted with boos by the home fans. The defeat keeps them in 15th place in the Premier League, only five points clear of the relegation zone, and plunges their season deeper into crisis. 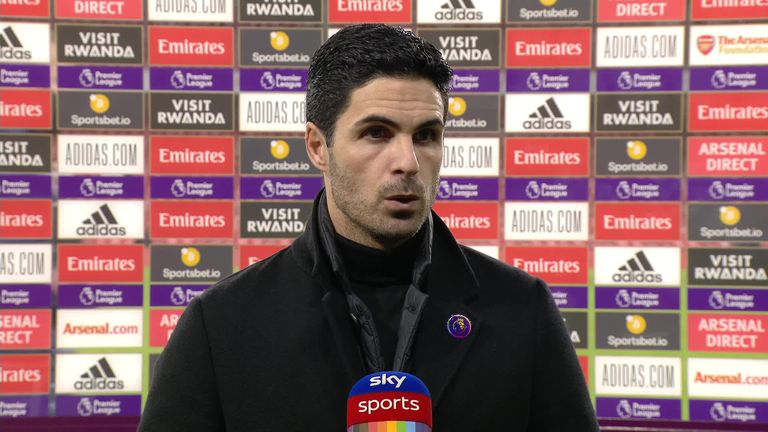 Arteta admitted Xhaka had overstepped the line after the game and that his red card cost the side dearly.

"We were on top from the beginning to the moment of the sending off," Arteta told Sky Sports. "We threw the game away."

When asked if Xhaka's behaviour was unacceptable in his post-match press conference, he added: "Absolutely."

He added: "He's made a mistake, clearly, that has cost us.

"We were prepared, knowing this was a game we clearly had to win, but with 10 men it makes it much more difficult. You give the opponent a chance and you end up losing on a set-piece."

Arsenal are back at the Emirates Stadium to face Southampton on Wednesday, with kick-off at 6pm. Burnley, meanwhile, travel to Villa Park to face Aston Villa on Thursday, kicking off at 6pm.