Wolves capitalised on a hotly-disputed penalty to leapfrog Southampton in the Premier League table with a 2-1 win; Ralph Hasenhuttl: "I'm normally a big fan and if VAR followed the rules it would be easy. I don't know what Mr Atkinson saw today." 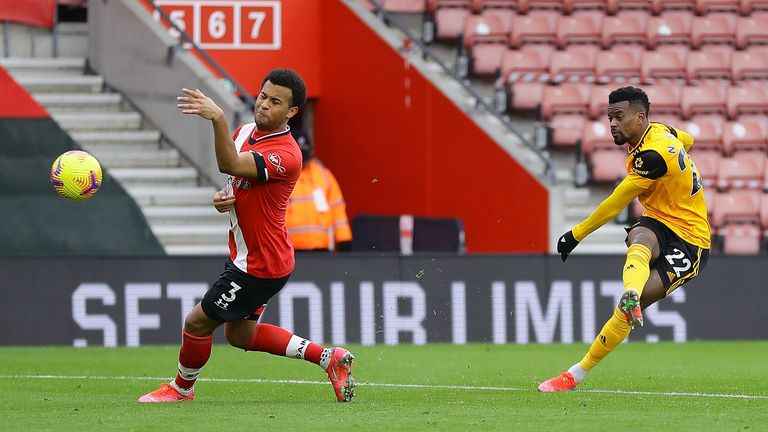 VAR took centre stage at St Mary's as Wolves were awarded a controversial penalty which ignited their comeback for a 2-1 win against Southampton.

Ralph Hasenhuttl questioned why Southampton were not awarded a penalty in their 2-1 home defeat to Wolves but the visitors were for a similar incident.

Ruben Neves converted the contested spot-kick that transformed the south coast clash, after Ryan Bertrand was controversially punished for handball.

Nelson Semedo's rasping effort struck Bertrand's hand as his back was turned attempting a block at point-blank range, but still the penalty was awarded.

Hasenhuttl was unwilling to focus on his side's record sixth straight league defeat, and preferred to direct his anger at the match officials, referee Graham Scott and VAR Martin Atkinson.

When asked if he feels VAR is destroying the game, Hasenhttul said: "I'm normally a big fan and if VAR followed the rules it would be easy. I don't know what Mr Atkinson saw today but they're not doing a good job at the moment. Then, it does destroy the game.

"We'll now take the time to work on our game and we hope we have more luck with the VAR in future. The referee explained that Ryan's arm was stretched away from the body but it was the shot which took the arm away. If it's the rule then he has to explain to me why the one in the other box wasn't a penalty. The VAR can but I couldn't speak to VAR. It's the issue we have as games are not being decided in the stadium but in Stockley Park."

Hasenhuttl was perplexed when Wolves were awarded a penalty for Bertrand's handball but the Austrian was incensed when Leander Dendoncker was not given the same punishment for appearing to handle from Stuart Armstrong's cross following Wolves' match-winner from Neto.

"There's only one opinion you can have about the situation," Hasenhuttl added. "I don't think either are penalties but if you give the first one you have to give the second. I don't know what the VAR saw in this situation. It's hard to understand but we have to accept it.

"I will always speak about why a free-kick isn't given in these situations for handball. That way it doesn't make it so harsh and so decisive in this game. I remember against Aston Villa a couple of weeks ago there was an even clearer penalty but we didn't get it. We were in control and the event turned the game around. It's hard to take in this moment."

The official line from Stockley Park was that Wolves' penalty was given on-field as Bertrand's arm was raised in an unnatural position and blocked a shot on goal. VAR Atkinson checked it, but no clear error was committed by referee Scott.

The result highlighted Southampton's brittle confidence. Hasenhuttl's side have led in each of their last four Premier League matches against Wolves but have failed to win any of them, resulting in 10 points lost - the most one side has dropped against another since the start of last season.

Ings' superb finish to end a run of four league games without a goal was of little consolation.

"I don't care about what we saw that was good in 60 minutes when you don't get a point," Hasenhuttl said. "We're six games now without a point in the Premier League. We've had some good moments in there but in the end it's the results we have to take.

"You can speak about getting flat, but we played against them three days ago. They had more rotation to their team so it's not too much of a surprise to me that they showed a bit more power in the second half. It's not so easy to keep on going when you concede an equaliser like this. We had chances, Che [Adams] had a good one, but it's hard.

"We can only influence what we do, playing the best we can and try to run the most we can and fight. The rest is not in our hands. We played with our strongest side on Thursday - they didn't. For us, the FA Cup is important. I have seen today for 60 minutes a team that was heading for a win and the way we lost is hard to understand."

Wolves avenged Southampton's 2-0 FA Cup win at Molineux from Thursday, with the penalty transforming the visitors from a disjointed rabble into an energised unit.

For all the controversy about the visitors' equaliser, the winner was a thing of beauty; Pedro Neto pirouetted around Jannik Vestergaard before slotting beyond Alex McCarthy and Nuno will cling to this comeback win as the green shoots of a desperately craved resurgence.

The win saw Wolves jump over Southampton into 12th place in the league table, with clashes against Leeds, Newcastle and Aston Villa to come. 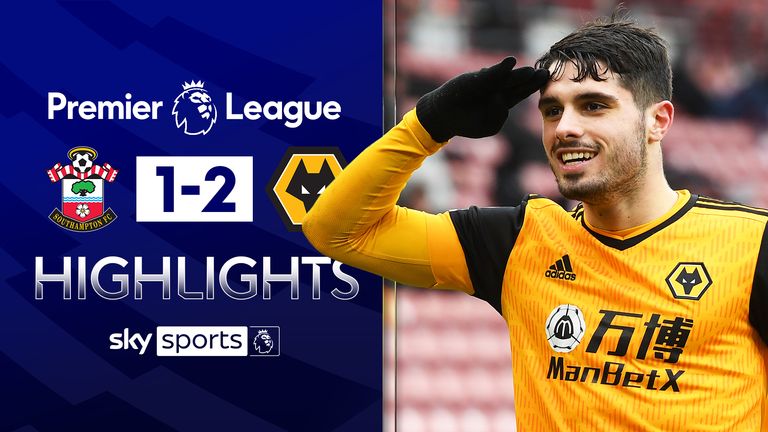 FREE TO WATCH: Highlights from Wolves' win over Southampton

Nuno said: "I'm pleased with the reaction as we moved the momentum of the game onto our side. We told them at half-time just to try to find better solutions as Southampton had started well and had been more aggressive. The game changed on the small details and due to the actions of our offensive players. The players did well.

"It was a very tough game. In the first half, I thought Southampton organised better but then we were on the front foot in the second period, scored two goals and defended really well. I'm thinking about us [for the penalty]. It was a good move and after it was the decision of the referee. I haven't seen the images yet but there are people in a better position than me to judge that.

"I don't agree that we were disappointing. Southampton are a tough team and they were better in that moment. But the game changed. I thought Pedro - in fact both of the wingers - did well once they changed sides with more actions. Their games are based on one-v-one situations. His goal was a huge moment for us. They're very talented and the standards are high. We expect the best from them."