Arsenal have become also-rans and don't have a plan to get back on track, says Paul Merson

Paul Merson: "Arsenal have become also-rans. I just don't see a plan. I just see the same old same old from Arsenal, and it is such a shame." | Follow Arsenal vs Slavia Prague with our dedicated live blog across Sky Sports' digital platforms on Thursday from 6.30pm; Kick off 8pm.

Paul Merson insists Arsenal have become also-rans, saying they lack any sort of plan to get the club back on the right track.

Arsenal produced a dismal performance as they slipped to a 12th Premier League defeat of the season with Saturday's 3-0 loss to Liverpool, and it led to stinging criticism from Sky Sports duo Gary Neville and Jamie Carragher on Monday Night Football.

In what has been an extremely difficult season for Mikel Arteta and his side, the Gunners sit 10th and are struggling to secure European football for next season, unless they can win the Europa League.

Follow Arsenal vs Slavia Prague with our dedicated live blog across Sky Sports' digital platforms on Thursday from 6.30pm; Kick off 8pm.

'Liverpool performance as bad as I've seen from Arsenal' 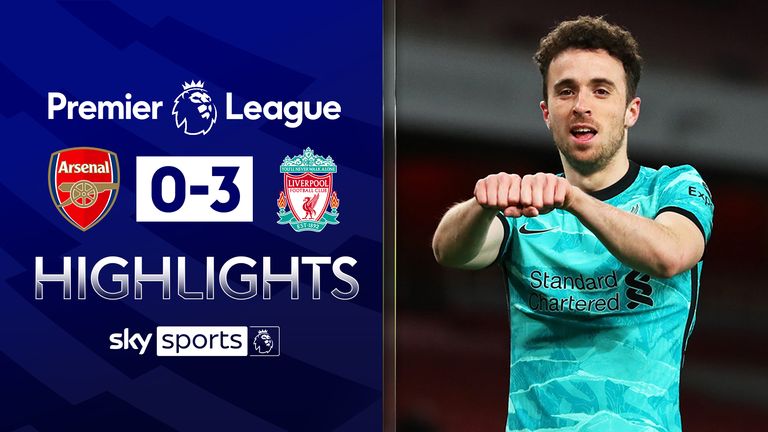 FREE TO WATCH: Highlights from Liverpool's 3-0 win over Arsenal.

"As I said before the Liverpool game, all the eggs have gone into the Europa League basket for Arsenal and it's as simple as that.

"They've taken that chance now to be completely and utterly judged on five more football matches, however, what I watched against Liverpool the other day was as bad as I've ever seen. 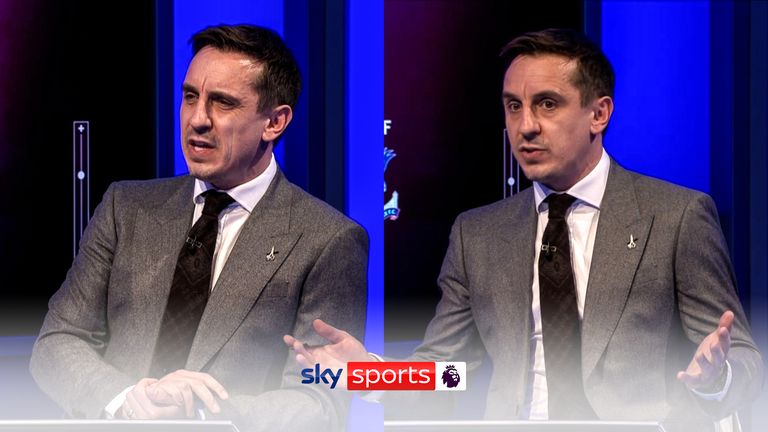 Gary Neville dissects Arsenal's performance against Liverpool and claims there was a lack of effort in the middle of the pitch.

"People will say about the times under Unai Emery and at the end of Arsene Wenger's reign, but I never saw anything like that.

"All I saw was rolling the ball back to the goalkeeper and he just lumped it down the field.

"I know we go on about Arsenal and sometimes they play out too much from the back and they get robbed, and we've seen it against Liverpool umpteen times over the years. Liverpool nick the ball and they go and score, but the other day, I've never seen anything like it from an Arsenal.

'Arteta knows it's not good enough' 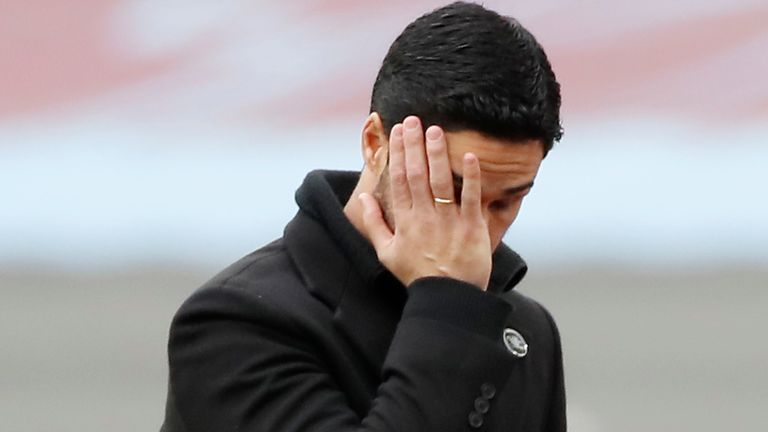 Mikel Arteta has apologised to Arsenal's fans for the side's 3-0 home defeat to Liverpool on Saturday, and says they must provide a positive response against Slavia Prague on Thursday.

"I don't think it looks dicey for Mikel Arteta at Arsenal.

"When they get beat and he comes out and takes the blame, he's just doing the opposite to what Jose Mourinho does when he criticises his player, but Arteta is thinking exactly the same as Mourinho.

"Mourinho just says it and the difference is one manager has been around for a long time and he's won everything in the game.

"He can just say it exactly as it is whereas Arteta is just starting out and he's got to say the right things in front of the camera.

"However, when the camera is away, he'll be thinking exactly the same as Mourinho.

"That wasn't good enough from Arsenal against Liverpool. It was as bad as it gets, and Arteta will know it." 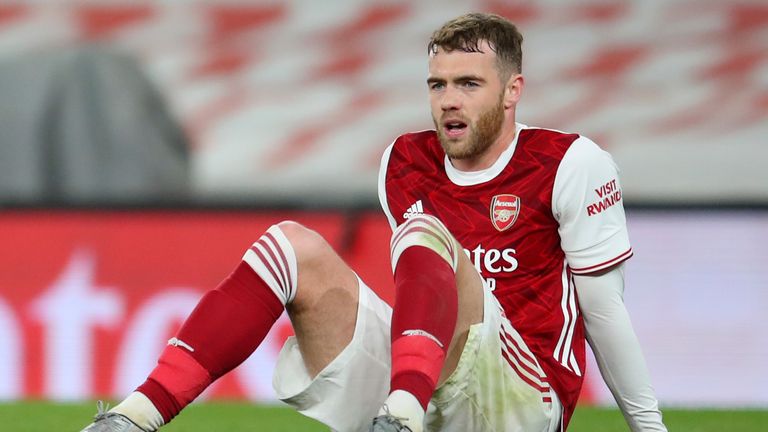 Arsenal boss Mikel Arteta says he has no doubts about his players' work ethic and hopes the defeat to Liverpool will prove to be a turning point for the team.

'Xhaka so important to Arsenal'

"The defeat Liverpool just goes to show you how good Granit Xhaka is. He became a better player not playing against Liverpool.

"People say to me they don't know what Xhaka does. He doesn't score goals, he doesn't make goals and gets booked and all that, but give him his due, what was glaring to see in Arsenal's defeat is that he wants the ball.

"Honestly, it was mind blowing.

'Aubameyang only brings goals to the party'

"It was another difficult night for Pierre-Emerick Aubameyang.

"I've always said, and I'll stick by it, unless he scores a goal he's not bringing much more to the party, and he never has.

"He's an out and out goal scorer, who plays out wide, and when you play out wide as a footballer, you are working on scraps. You either get the ball so many times you get sick of it or you never see the ball at all, and he's a goalscorer.

"He's a bit like Mesut Ozil without the goals. He's not going to run back and do a fifty-fifty tackle or chase the ball back and get it back for his side.

"Goals are what he brings to the party and at the end of the day, it is the hardest thing to do, but when you are the captain of Arsenal Football Club, which is a big thing, you need to have a bit more than what you are showing at the moment.

"His confidence is well and truly shot,but he's a goal scorer and in a big football match against Slavia Prague he could end up on the far post and score. That's what he can do.

"Aubameyang is 31 now but when he came over, you thought he is absolutely lightning. However, there is one thing you are assured of in life, though, the older you get the slower you get.

"To give him that kind of money at this stage of his career is just pure panic. It's lazy from Arsenal. It's a mistake they've made in the past too, so it's really lazy stuff from the club.

"Now they are stuck again, and they are in that situation where they want to try and get someone at the club, but they want to be paid the same as Aubameyang.

"The club can't pay that again, but he is not putting up figures that are mind blowing and it creates a problem. That's where we start all over again and they can't get players in.

Do Arsenal have another Ozil situation on their hands? "It's up to the manager whether this becomes another Ozil situation.

"You can say it's another Ozil situation, but Ozil wasn't given the chance to play.

"If Ozil would have played, he would have made chances, for sure. He would have always got in my team at Arsenal if I was the manager. You play your best players and you get players who are going to work a bit harder around them. Xhaka can't do what Ozil does and Ozil can't do what Xhaka does.

"But another Ozil scenario will be down to the manager and whether he plays Aubameyang and plays him through this spell.

"Bukayo Saka and Emile Smith Rowe also showed what a big miss they are, and you know why? Because they work hard.

"They are great players, but they also put the hard yards in.

"You show me a world class player that doesn't work hard and that is it.

"That is where Arsenal are at. Saka and Smith Rowe are probably not far of being their two lowest paid players at the club and they are up there with their best players.

"That sums Arsenal up at the moment. 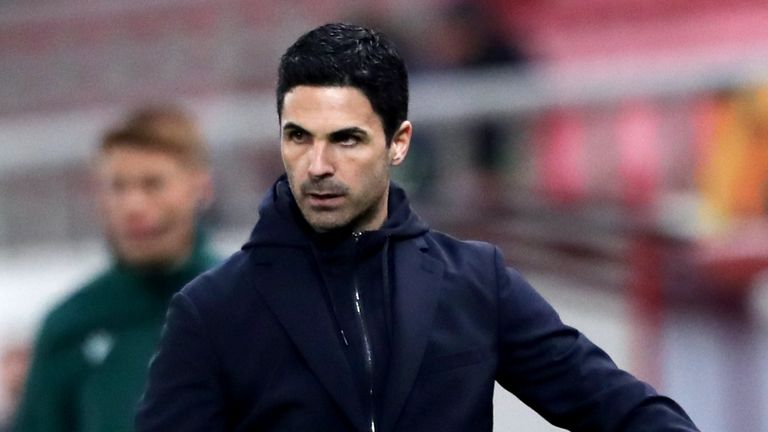 Mikel Arteta retains the faith of the Arsenal board and is only part-way through his planned overhaul of the squad, says The Independent's Miguel Delaney.

"I watched Arsenal against Spurs and they were outstanding. You watched them and thought they looked a good team. They looked like they were going to turn a corner but then against Liverpool, who are not setting the world alight at the moment, they looked completely lost.

"It's a roller coaster for Arsenal at the moment, and they've got another massive summer coming up for the club.

"You've got to start somewhere, and you cannot keep doing what they are doing. That's the problem.

"The club have become also-rans.

"You are buying a season tick at Arsenal next season for what? A good cup run.

"Do you see them getting in the top four next season? I don't. Barring a Europa league win there is unlikely to be European football at the club next season. 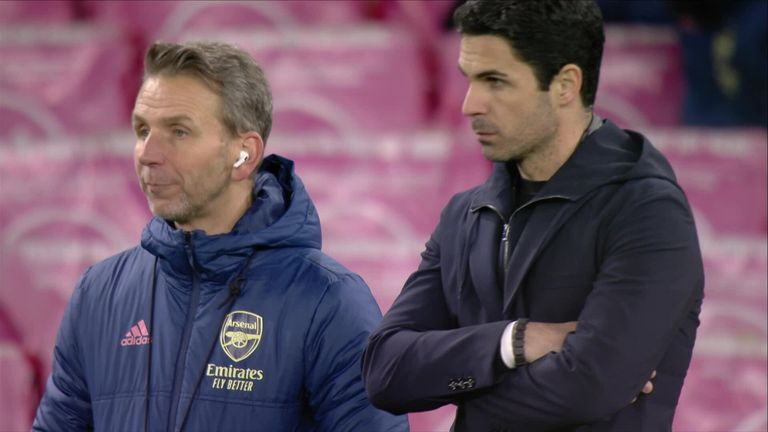 Former Arsenal goalkeeper Jens Lehmann agrees with Gary Neville's views that there is a 'disconnect' between some of the club's players and Mikel Arteta.

"I just don't see a plan at Arsenal at the moment. All I see is an aim to get through the next season and we'll see how it goes along the way, and something might change, and we'll get lucky along the way.

"That's what it feels like at the moment, but I don't see change coming.

"I just see the same old same old from Arsenal, and it is such a shame. I don't care what anybody says, it's an unbelievable football club."

Follow Arsenal vs Slavia Prague with our dedicated live blog across Sky Sports' digital platforms on Thursday from 6.30pm; Kick off 8pm.