FREE TO WATCH: Highlights from West Ham's win against Burnley in the Premier League

Michail Antonio's first-half double was enough for West Ham to see off Burnley 2-1 in an entertaining encounter, sending the Hammers into fifth.

Although West Ham saw good early openings, it was Burnley who went ahead in the 19th minute as Tomas Soucek fouled Chris Wood in the box. The striker fired home the penalty, continuing his trend of goals against West Ham (seven goals in eight Premier League games).

But two-and-a-half-minutes later, Europe-chasing West Ham were level when Antonio (21) headed home. The lively forward then added his second soon after (29) as he turned home a superb Said Benrahma cross.

Having registered 22 shots throughout the whole game, West Ham could have added more to their tally in the second half, although Burnley's Jay Rodriguez had the best chance to score but could only fire wide.

The victory sees West Ham go above Tottenham into fifth, keeping them on track for European football next season with four games to play. Burnley are now winless in their last eight Premier League home games - matching their longest run without a top-flight victory at Turf Moor (eight between December 1970 and March 1971) - and remain in 16th.

How West Ham edged past Burnley

West Ham began wonderfully, and had two sights of goal inside 11 minutes. Antonio sent an effort wide from the top of the area, before Manuel Lanzini curled the ball just over Nick Pope's bar.

But for all of West Ham's early chances, it was Burnley who went ahead first. Some superb play from Wood inside the area saw Soucek swipe at his legs, handing the hosts a penalty. The striker stood up to take it himself, dispatching into the bottom left corner and through the palms of Lukasz Fabianski.

Wood has now scored more Premier League goals against West Ham than he has versus any other side in the competition, netting in all four of his Premier League appearances against the Hammers at Turf Moor.

But 154 seconds later, and West Ham were level. Vladimir Coufal sent in a superb cross from the top right corner, with Antonio rising above his marker to nod home. The forward was on target again eight minutes later. Benrahma curled a wonderful cross in from the left, with Antonio needing only the slightest of touch to send the ball past Pope.

Minutes later, it was almost an identical third and an Antonio hat-trick. Benrahma again fired in a cross from the left, but this time, Antonio's outstretched foot was unable to turn it home. Burnley could also have added another with Matej Vydra getting the better of both Issa Diop and Fabianski in the area, but Craig Dawson was waiting to clear the ball off the line.

West Ham continued to impress at the start of the second half, racking up six shots in the opening 15 minutes after the break. Antonio had another glorious effort for his hat-trick too, but his right-footed shot hit the heel of his left. The ball then ran away from him as Burnley cleared.

Burnley should have equalised in the 64th minute. Josh Brownhill's initial effort was saved wonderfully by Fabianski, before landing at Jay Rodriguez's feet inside the six-yard area. His first effort was blocked by Coufal, before the second dragged well wide.

The chances kept coming from both sides - Rodriguez nodded wide from a corner before Antonio sent an effort just past the post. Late in the game, it was another superb break from West Ham, but Jesse Lingard's effort pinged off Ben Mee before forcing a good save from Pope.

It was an absolutely superb performance from Antonio as the central striker. The signs were there inside mere minutes as he fired wide from the top of the area, but he was soon on target with two wonderfully taken goals.

He had other efforts to complete his hat-trick, but it wasn't to be for the striker and he will likely be frustrated to have not got that third goal.

But he led the way for the West Ham team in terms of shots (6) and shots on target (2) as they aim for a strong finish to the season.

Antonio: VAR has stopped me celebrating 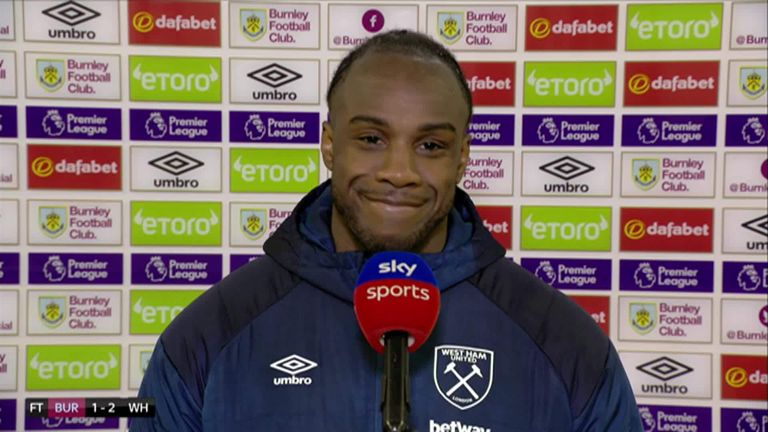 "I'm buzzing to be fair. It's been a great season. I'm over the moon. I'm a bit disappointed not to get a hat-trick, I had chances. This is a very tough place to come. You dread coming here.

"I've had a couple of goals disallowed by VAR. I thought 'I don't want to be there doing a dance and the goal gets disallowed'. I've toned down my celebrations. A couple of times I've been about to do one and a handball or whatever, VAR has killed it.

"It would be unbelievable [to qualify for Champions League]. Everybody wants to play in the Champions League. I have been here a few years and there have been so many seasons we were fighting to stay in the league and now we have the opportunity for top four, it's a dream come true. We will keep fighting, keep pushing."

Carragher: West Ham in the Champions League? Go for it!

"The team he picked tonight, it wasn't a very David Moyes move in terms of his perception as a manager at times. If you were asking if David Moyes is a more attacking or pragmatic manager, you'd probably say pragmatic.

"He almost said before the game 'we need three points'. He called it on and it was interesting that West Ham and David Moyes are talking about Europe. But I think in the back of his mind, Moyes has to think Champions League. 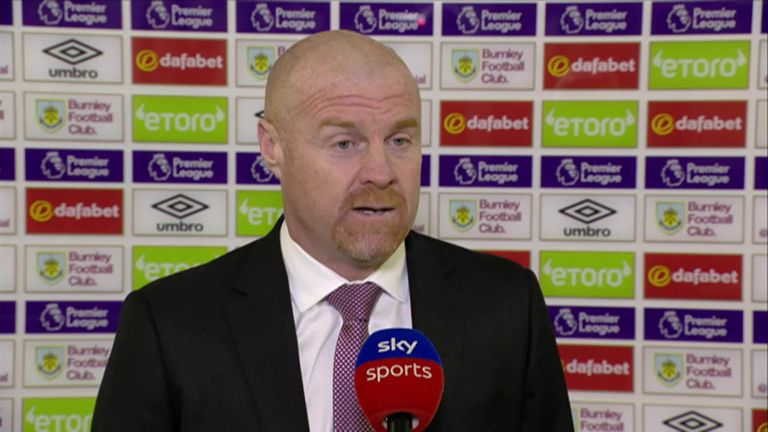 Burnley manager Sean Dyche: "A good game played at a quick tempo, both going at it. They are chasing Champions League spot and we are trying to look after ourselves. We didn't go too far wrong. Our level of performance has been good. Overall they were the stronger side.

"We didn't stop the crosses enough, especially first half. Transition was a big thing. We gave the ball away too often to a side with a lot of danger.

"Thing for me is levels and we have had that right for a while. Against good sides you need to perform. We weren't a million miles off. They were good and sometimes you need to hold your hands up." 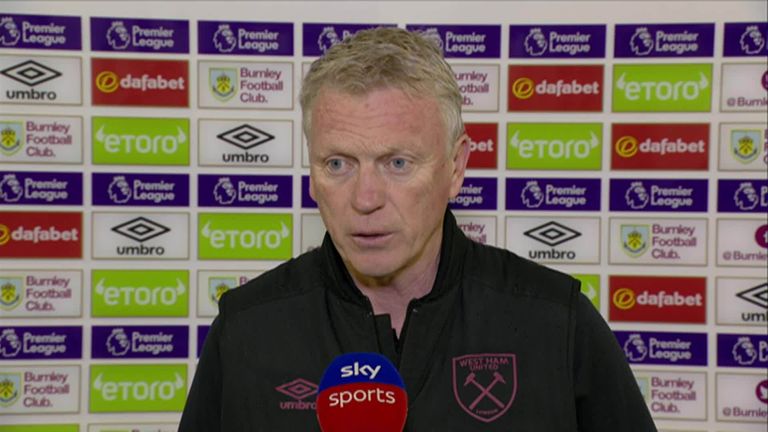 Speaking after the 2-1 win over Burnley, David Moyes claims his West Ham side will probably have to win their remaining four games in order to qualify for the Champions League

West Ham manager David Moyes: "The team played really well. We won 2-1 but I felt it was a lot more than that. We rode our luck at the end but we should have been out of sight.

"I'd love to be in Europe. It would be an incredible achievement. We're not far away from the Champions League positions. We've got to keep believing.

"Said played well tonight but he's still got more consistency to come. Asking boys to be successful in their first season in the Premier League isn't easy. I'm hoping he adds that [goals and assists] to us. I always felt it would take him a bit longer. He is a really good team player.

"Four games to go, it's great. I want to smile about it. I've been here before - we'll probably have to win the four games. If we played the way we played tonight we'll give most teams a game."

Burnley are back on Monday Night Football next week when they travel to Fulham; kick-off 8pm. For West Ham, they host Everton on Super Sunday; kick-off 4.30pm.