Jamie Vardy was the hero again as Leicester were 1-0 winners over Wolves as fans filled the King Power Stadium again.

Vardy's superb cushioned volley from Ricardo Pereira's right-wing cross late in the first half was enough to give last week's Community Shield winners the three points on the opening weekend of the Premier League season.

Wolves had gone close through Adama Traore and pushed hard for the equaliser in the second half but it is a losing start for their new coach Bruno Lage.

How Leicester won it

With supporters back in the stadium, there was a superb atmosphere from the start but both teams were fairly cautious in the early exchanges as chances were hard to come by.

Vardy was always a threat, twice testing debutant Jose Sa in the Wolves goal and even finding the net before his opener only for it to be correctly flagged for offside.

But the first clear chance of the game fell to Traore after Joao Moutinho had capitalised on Daniel Amartey's error by cleverly putting his team-mate through on goal.

There was no catching the flying winger despite Caglar Soyuncu's best efforts but Traore's measured finish beyond Kasper Schmeichel was directed just wide of the far post.

It felt like a big moment in the match and so it proved when Ricardo Pereira did brilliantly to evade both Moutinho and Fernando Marcal on the right wing before whipping in a cross.

Vardy reacted quicker than the defenders, racing to the near post to expertly divert the ball beyond Sa and send the Leicester supporters wild with his 119th Premier League goal.

The template for Brendan Rodgers’ team was set by their victory in the Community Shield at Wembley so there only one change from the starting line-up there as Luke Thomas came in for Ryan Bertrand, the left-back having tested positive for Covid-19. There were plenty of new signings on the bench including Jannick Vestergaard.

Raul Jimenez returned to action for Wolves as expected for his first appearance of the year. If there was a surprise in the line-up it was that Ki-Jana Hoever started over Nelson Semedo, who was among the substitutes, although the Portuguese did miss the final pre-season game as he was isolating. Francisco Trincao made his debut.

It made for a tricky half-time team talk for new Wolves boss with the onus on him to ensure there was more support for the returning Raul Jimenez up front.

There was a response in the second half as Wolves dominated from the start, Francisco Trincao on the ball much more and the wing-backs overlapping more effectively.

It prompted a change of shape by Leicester with Jannik Vestergaard coming on for his debut as Rodgers switched to three at the back in an attempt to shift the momentum.

There were still chances at both ends with Harvey Barnes failing to find Vardy when two-on-one, while Traore outmuscled Vestergaard only to shoot too close to Schmeichel.

Max Kilman came closest to levelling things after a fine run that resulted in a blocked shot before his header in the immediate aftermath was straight at Schmeichel.

Leicester held on without further incident, Vardy's superior finishing on the day enough to send their returning supporters home happy after a long wait. 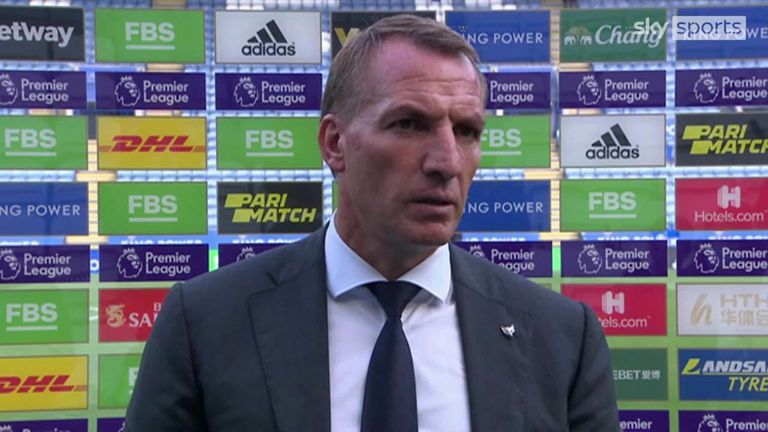 Leicester's Brendan Rodgers: "The players delivered today. It was an important game for us, trying to make the first step a positive step, so to perform to that level I was really pleased with at this stage of the season. We know there is lots that can be improved upon but the quality and spirit of the team was very pleasing."

Wolves' Bruno Lage: "We created a lot of chances. I think we deserve more than we have. We played well. This was the way we wanted to play and we followed the plan. So I am confident in the process. This team can do well. Our game can improve. But I am disappointed with the result." 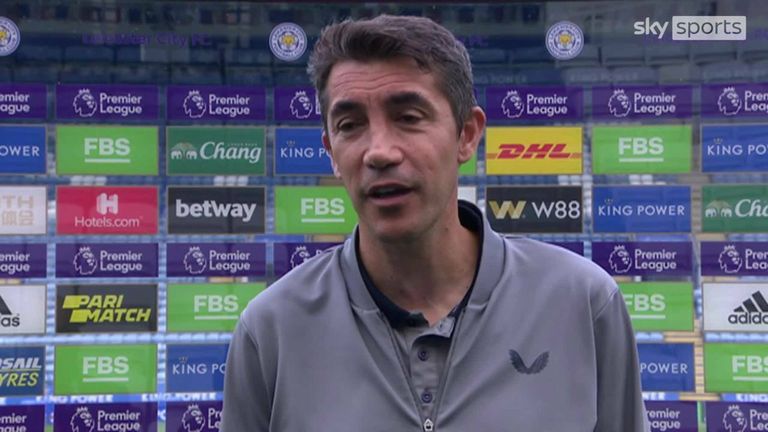 "It was fantastic movement from Vardy across Coady and a brilliant flicked finish. You're always looking to get off the mark quickly as a striker. You have to give Wolves credit for the second half - they just failed to threaten Schmeichel. Jimenez held the ball up well, brought his team-mates into play and attacked balls in the box, which was good to see. It was just good to see him back on a football pitch. Leicester were unlucky to miss out last season but I think they will be up there again; Rodgers will be delighted with the three points and the clean sheet."

Leicester are unbeaten in each of their last five Premier League season openers when playing at home (W2 D3), including avoiding defeat in each of the last two, both vs Wolves (W1 D1).

Wolves have lost their last four Premier League games in a row, failing to score in three of those games. It's their longest run of defeats in the competition since April 2012 (7).

Wolves lost a league opener for the first time since 2012-13 vs Leeds, having gone unbeaten in the previous eight before today (W4 D4).

Leicester have lost just one of their last 25 home league games against Wolves (W15 D9), with that defeat arriving in May 2007 in the Championship.

Only Frank Lampard, Wayne Rooney and Alan Shearer (all 8) have scored more goals on the opening weekend of Premier League campaigns than Leicester's Jamie Vardy (7).

Leicester's Jamie Vardy has scored three goals in his last two Premier League games, one more than he had netted in his previous 20 in the competition (2).