Why VAR got it right in denying Southampton a penalty against Man City, but should Cristiano Ronaldo have been awarded at least one spot-kick? Former Premier League referee Dermot Gallagher runs the rule over the weekend's big incidents

INCIDENT: Saints thought they had a chance to break the deadlock after half-time, but after awarding the visitors a penalty and showing Kyle Walker a red card for making contact with Adam Armstrong, referee Jonathan Moss overturned both decisions when consulting the pitchside monitor.

DERMOT SAYS: I think this is a very complex and interesting issue. My initial reaction was penalty and yellow card. Having seen it again, the only certainty is that it isn't a red card. He makes a challenge for the ball, which means no double jeopardy.

I don't think it's a penalty now I've seen the replay. The angle the referee looked at, that convinced him, shows Armstrong overrun the ball. I think Walker gets around him, and Armstrong goes in and catches Walker on the back of the calf. I think the referee got it right having looked at the monitor.

I think Walker just gets in front of Armstrong, and Armstrong actually goes into the back of Walker's leg.

INCIDENT: Cristiano Ronaldo felt he should have had a penalty when he went down under Vladimir Coufal's challenge, but referee Martin Atkinson was unmoved.

DERMOT SAYS: I was surprised this wasn't given. I think it's an easier decision to make to give a penalty. He dangled a leg, they adjudged he tried to take it away, but he'd already gone too far into the challenge, for me.

INCIDENT: Moments later, Ronaldo again had a strong penalty appeal waved away after a challenge from Kurt Zouma.

INCIDENT: West Ham were given a lifeline to salvage a point from the game when Shaw was penalised for handling Andriy Yarmolenko's cross after a VAR review.

DERMOT SAYS: VAR is here to pick these things up and it did. Ball comes across, strikes him on the arm. Handball.

INCIDENT: Aaron Wan-Bissaka slides in to intercept a ball, Tomas Soucek leans into him also looking to take the ball, but Wan-Bissaka takes out the West Ham man. Atkinson awards free-kick to Man Utd for a foul by Soucek.

DERMOT SAYS: The feeling on the field was that Soucek made the foul, but I think the defender takes the forward out and it's a foul. He doesn't realise he's there, but he's caught him.

FREE TO WATCH: Highlights from Brighton's win over Leicester in the Premier League

INCIDENT: Shane Duffy headed onto Jannik Vestergaard's outstretched arm, though the defender appeared to have been held and hindered by Brighton's Neal Maupay.

Referee Stuart Attwell consulted only his assistant rather than the touchline monitor but the VAR upheld his decision and Maupay sent Kasper Schmeichel the wrong way.

DERMOT SAYS: When I first saw it I thought it was a really good spot by the assistant. When you see the replay, you see Maupay definitely brings it back. I wonder if they've concentrated so much on the handball that they haven't seen the foul. I was surprised the foul wasn't given.

INCIDENT: Leicester looked to have secured an equaliser when Ademola Lookman scuffed into the back of the net, but it was ruled out after the VAR again upheld the on-field decision of an offside flag, with Harvey Barnes judged to be in Robert Sanchez's line of sight. Barnes was then again judged to have interfered with the goalkeeper as Wilfred Ndidi headed home a corner.

DERMOT SAYS: I don't think there's much doubt about the first. He's directly in line with the goalkeeper. The goalkeeper doesn't see the ball until it is past him. The second, he moves towards the ball, so he's impacting on the goalkeeper.

INCIDENT: Referee Anthony Taylor pointed to the spot when Burnley's Matej Vydra was upended by Aaron Ramsdale after pouncing on a weak Ben White backpass, but VAR spotted the Gunners goalkeeper had made contact with the ball before the player and the decision was overturned.

DERMOT SAYS: The ball deceives the referee. Because it goes to the left, I think the referee thinks Vydra played the ball, and therefore thinks Ramsdale's made the foul. This is where the VAR process really works. To Anthony's credit he's come back and changed his mind. 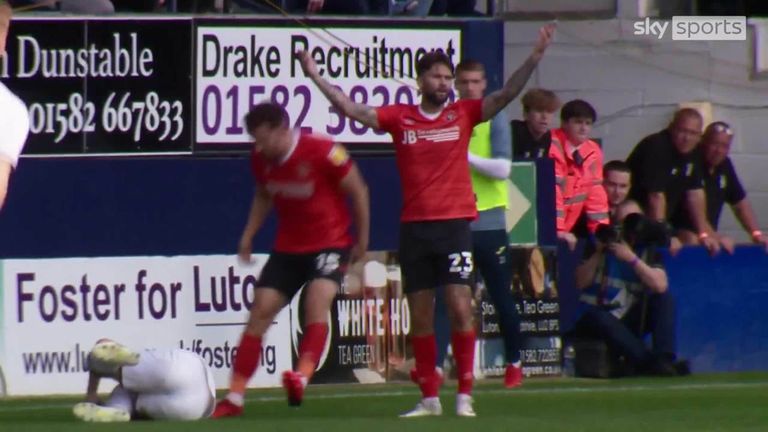 Is Luton's Henri Lansbury incredibly lucky to avoid a red card for this wild swipe during his side's 3-3 draw against Swansea?

INCIDENT: Luton's Henri Lansbury picked up a yellow card for this swipe on Ryan Manning during his side's 3-3 draw against Swansea, though Manning had kicked the ball away just as Lansbury was about to kick.

DERMOT SAYS: I just don't know why it's not a red card. The player will say: "I was going to kick the ball, it was our free-kick" but if you boot anyone that hard, it has to be a red card.