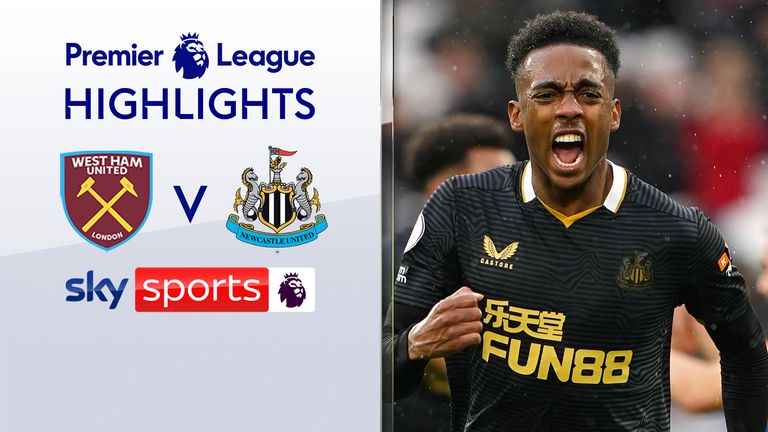 FREE TO WATCH: Highlights from the 1-1 draw between West Ham and Newcastle in the Premier League

Newcastle's march away from the relegation zone continued with a 1-1 draw at West Ham, who missed the chance to move into the top four.

However, Newcastle were unfortunate to be behind at that point and grabbed a deserved leveller when Joe Willock's clever finish just about skipped over the line via the post with goalline technology awarding the goal.

David Moyes's men failed to register a single shot on target during the second half and produced an expected goals figure of just 0.64, illustrating how unimaginative they were in attack with Michail Antonio not at his usual levels.

The point lifts Newcastle five points clear of the drop zone, while West Ham remain fifth but have played at least three more games than the chasing pack behind them.

Man of the match:Joe Willock

"Champions League, you're having a laugh" sang the Newcastle fans at full-time towards the Hammers whilst a section of the home fans booed their team off.

When a player is in such a crisis of confidence, it becomes difficult to watch sometimes. That is the case with Antonio at the moment.

Everything he tries doesn't come off. Simple passes go astray, crosses are easily cleared. His lack of zest in the final third is an explanation for West Ham's lack of guile and creativity.

Antonio is the platform West Ham build from. He takes defenders all over the pitch with his running - to the extent it's like having two strikers in one when Antonio is at his best. He is miles off it at the moment, not through a lack of endeavour but perhaps the busy schedule is catching up with him. Even Moyes looked to the heavens when Antonio skied a speculative effort from 25 yards into the stands behind the goal.

The Hammers striker is on a run of just two goals and three assists in his last 17 Premier League games. Thankfully for Moyes, Jarrod Bowen has managed seven goals and six assists in that time to help West Ham keep in and around the top four.

Antonio needs taking out of the heat of this battle - but Moyes can't. He just doesn't have the replacement at his disposal, which begs the question yet again of why did they not look to strengthen in the January transfer window?

Bruno Guimaraes cost Newcastle £40 million yet he's only played six minutes since joining from Lyon. There is an obvious reason for that: the form of Willock.

He has taken his game to another level since Newcastle splashed the cash on their star midfielder. Willock has the shirt and in this form, he can't be dropped. Playing in a free role just off Chris Wood is exactly what gets the best out of the former Arsenal man. His strengths are his decisive runs into the box and with Jonjo Shelvey and Joelinton mopping up in behind him, he is thriving.

Special mention has to go to West Ham defender Dawson, who was a man mountain at the heart of the Hammers defence and popped up with another goal.

Moyes said: "It is a long time since journalists talked about West Ham in a top-four chase. We want to be that club and we enjoy the journalists talking about us in that way. Today was not a good performance, it was good we took a point because on another day maybe we would not have but if we want to hang in with the big boys we are going to have to win games like this.

"I'm getting more interest in our getting back to a level of performance than points. I want us to get back to being a really exciting front-foot team playing well. I know if I get those performances we will get more points but at the moment I am scrapping a few here and then but I cannot say I am really enjoying it."

Howe said: "I'm satisfied with the point but frustrated it maybe wasn't more. The way we started the game was excellent. The only disappointment for me was that we only got one goal - there was more in it for us.

"Although we dominated they still had a threat in the game. That's what West Ham can do to you. We're disappointed that the free-kick was poorly defended from our perspective. That's a frustration, but the character and response was there. With the balls we put into the box, it should have been more."

Opta stats - Toon turning it around

West Ham are back in Premier League action next Sunday (Feb 27) when they host Wolves, live on Sky Sports; kick-off 2pm.