Relegation-threatened Everton are in 17th place in the Premier League standings on 29 points; Liverpool are second on 76; ; watch Liverpool vs Everton live on Sky Sports Premier League & Main Event from 4pm on Super Sunday; kick-off 4.30pm

Frank Lampard says Everton are "underdogs" ahead of Sunday's 240th Merseyside derby against Liverpool, but the Toffees boss expects nothing less than "passion, fight and desire" from his side as they battle to avoid the drop.

Relegation-threatened Everton are in 17th place in the Premier League standings on 29 points, with a game in hand over 18th-placed Burnley, who have 28 points from 32 games.

Liverpool, meanwhile, remain one point behind leaders Manchester City at the top of the table and are hunting an unprecedented quadruple.

The Toffees won 2-0 at Anfield last season and, speaking in his pre-match press conference ahead of Sunday's game, live on Sky Sports, Lampard discussed what it would take to repeat that victory and boost his side's survival chances.

"It's a huge fixture. I have watched it from afar many times. I am very happy to be involved," he said.

"You can't always control the result. This game brings a different energy to it. I expect passion, fight and desire. There's not a game plan in the world that will work without that.

"We're playing the strongest team, on form, in the league. You have to use that as a positive. We have to fight until the last minute, no matter what happens. We are the underdogs, that's clear. But we have to fight!" 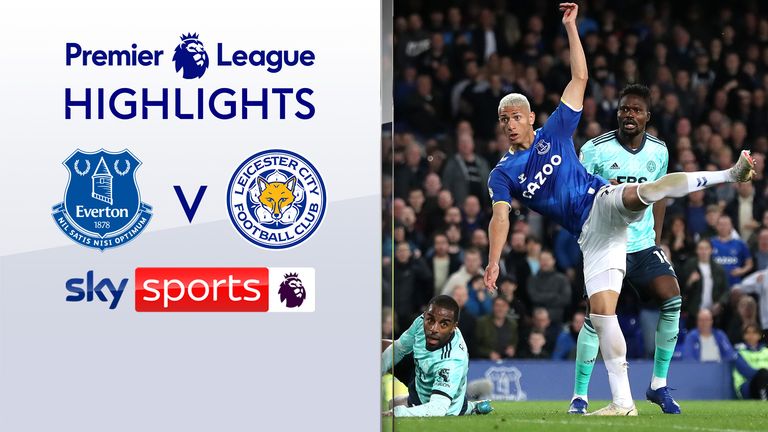 FREE TO WATCH: Highlights of Everton's draw against Leicester City in the Premier League

Everton could be leapfrogged by Burnley, who have taken four points from their past two games, if they draw with Wolves on Sunday before the Toffees face their Merseyside rivals in the later game.

Lampard added: "We can't gauge our mindset on other results. They'll happen, you have to expect other teams will win games.

"I'm a realist. You understand the position we're in, in the league.

"I've played Liverpool, managed against Liverpool - it's always daunting because you respect the level of player and manager they have.

"It's always a test no matter what, so I'm well-versed in that. It's a slightly different type of test, it's why we're in this game."

Both players were unused substitutes in the midweek draw at home to Leicester but Van de Beek has a groin problem while Gomes also has a minor issue.

Everton are still without Dominic Calvert-Lewin, who is out with a thigh injury. Liverpool manager Jurgen Klopp admits he would miss the Merseyside derby if Everton are relegated from the Premier League.

While Everton are mired in a battle to avoid the drop, their near neighbours are challenging for three more titles having already won the Carabao Cup.

Asked whether he would miss the fixture, Klopp said: "Of course. I think we're all used to having two clubs in the city playing in the Premier League.

"It's a bit different this week because we played Manchester United the other night, but usually the full week before you play Everton there are just talks about the derby."

Remembering a great Everton escape they won't want to repeat

"As Everton prepare to take on Liverpool in the 240th Merseyside league derby, the threat of relegation remains a daunting concern. With seven games remaining to ensure they avoid that terrible fate, my mind wandered back 24 years to a day of tension, panic and sheer consternation.

"It was May 10, 1998, Goodison Park as Everton met Coventry City, knowing unless they bettered Bolton Wanderers' result at Chelsea they would lose their top-flight status of 44 years. It was a desperate time for Evertonians and as press officer at the club at the time, I was at the heart of the unfolding drama.

"It's a day I will never forget. Arriving at the ground there was a tangible sense of dread, which wasn't helped when I was summoned to speak with then chairman Peter Johnson, and had to be checked by police before entering the boardroom, as he'd received various threats in the days leading up to the game from disgruntled fans.

"He wanted to talk about what my plan was for the after-match arrangements, whether it was good news or bad, how we would address the situation. What followed still leaves me cold to this day, my idea was that having him face the media after the game, regardless of the outcome, was just too risky.

"In those days, communication to the fans came via the press box or ClubCall, although expecting supporters to pay 50p a minute for that sort of announcement seemed ambitious at best. My idea was to record two versions of his post-match statement, one if we stayed up and one if the worst was to happen.

"I can still hear, with great clarity, his voice breaking as he uttered the words: "The relegation of this great club is a terrible tragedy". It was then the reality and enormity of the situation hit me, this was real. On the way out he said "Alan, if you put the wrong one out, you know you're sacked don't you?" I assured him if that happened he wouldn't need to tell me!"