Report and free match highlights as Erling Haaland's stoppage-time penalty breaks Fulham hearts; Manchester City had been reduced to 10 men when Joao Cancelo was sent off as the last man with Andreas Pereira cancelling out Julian Alvarez's opener; City move top, above Arsenal by a point 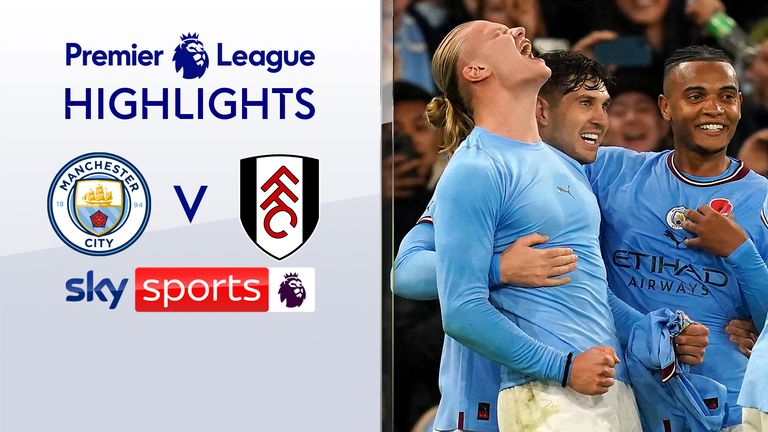 FREE TO WATCH: Highlights from Manchester City's win against Fulham

Erling Haaland's 95th-minute penalty dragged 10-man Manchester City back to the top of the Premier League with a 2-1 victory over Fulham on a day of high drama at a sodden Etihad Stadium.

Haaland kept his composure to tuck away his 18th league goal of the season after Kevin De Bruyne was fouled by Antonee Robinson in stoppage time to deny Fulham an unlikely point.

Julian Alvarez blasted the hosts in front on 17 minutes after relentless pressure, but referee Darren England's decision to send off Joao Cancelo and award Fulham a penalty turned the game on its head.

Andreas Pereira dispatched the spot-kick (28) to haul the visitors level, but, after a marginal VAR call had already frustrated Haaland, the Norwegian restored City's lead by converting his penalty underneath Bernd Leno with virtually the last kick of the game.

Haaland told Sky Sports: "It's fantastic. I was nervous [for the penalty]. It was one of the most nervous moments of my life, but fantastic. A penalty in the last minute, of course I would be nervous. But it's an amazing feeling. I love it. I have been injured for a week and it is really important to win."

The result means City move above Arsenal on 32 points with the Gunners facing Chelsea at Stamford Bridge on Sunday. Fulham slip to eighth on 19 points after their four-game unbeaten run was ended.

Pep Guardiola's 10-match winning home run in all competitions remains intact, and the unbridled joy that greeted the final whistle as the Catalan embraced Alvarez and Jack Grealish on the pitch underpinned the spirit of champions.

City are now unbeaten in their last 15 Premier League games against Fulham, winning 12 including their last 10 against them in the competition, but they could not have left victory No 10 any later.

Alvarez was handed a chance to impress from the start, with Haaland back fit but on the bench, but it was De Bruyne who had the opening chance as his fierce drive from 25 yards was pushed away by Leno inside 10 minutes.

Fulham arrived in Manchester having won just two of their 15 Premier League away games against reigning champions, although they did win their most recent such match 1-0 at Liverpool in March 2021. They were without their nine-goal talisman Aleksandar Mitrovic due to ankle pain as Carlos Vinicius led the line.

Pereira had been somewhat fortunate not to have seen red for a late challenge on Rodri early on, but it did not take long for City to establish a lead.

Ilkay Gundogan collected the ball in space from Rodri and, after piercing the Fulham defence, Alvarez kept his composure to flash a right-foot shot into the net via the underside of the crossbar.

Leno had not covered himself in glory, anticipating a shot across goal as he went to ground, but Alvarez was rewarded for his lightning movement. City looked in complete control, and might have doubled their lead when John Stones nudged in from close range but Rodri was offside in the build-up from De Bruyne's free-kick.

Less than a minute later, Fulham were awarded a penalty.

Vinicius did well to suck in Nathan Ake and release Harry Wilson through on goal before a blatant barge from Cancelo led to inevitable consequences.

Referee England had no hesitation in awarding the spot-kick and sending off Cancelo, deemed to have made no attempt to play the ball as the last man. The Citizens had gone 40 league games without having a player sent off before that.

Periera kept his cool to send Ederson the wrong way. The mood of the home supporters turned as filthy as the weather and, spurred on by a sense of injustice, Grealish twice went close before the interval with one effort curling wide before another shot deflected just over.

City ought to have restored their lead before the break when Manuel Akanji rose unmarked to head straight at Leno from point-blank range. It was the fifth attempt in fact City had after Pereira's leveller and it was not long before Haaland was being readied after the restart with Fulham happy to use the extra man to hold City at bay.

The visitors remained compact and combative, allowing City the ball in their own half, with Wilson's tame effort on the transition failing to trouble Ederson as Phil Foden and Haaland were summoned in a double change shortly after the hour mark.

De Bruyne remained City's bright spark as his disguised free-kick whistled just past the post, and it was the Belgian's brilliance which looked to have unlocked Fulham when his delicious cross was headed in by Haaland.

But, in keeping with City's day, VAR Stuart Attwell advised referee England to chalk off the goal with Haaland just the wrong side of Issa Diop's back leg. City were not to be denied, however, as, after Robinson dangled a leg at De Bruyne, England became the Etihad's unlikely hero - and Haaland did the rest.

When asked if it was great to be back, Haaland said: "I want to play every game. It was difficult [to be on the sidelines] but in the end we needed three points and that is what we got. I am so tired, but so happy. You have no idea." 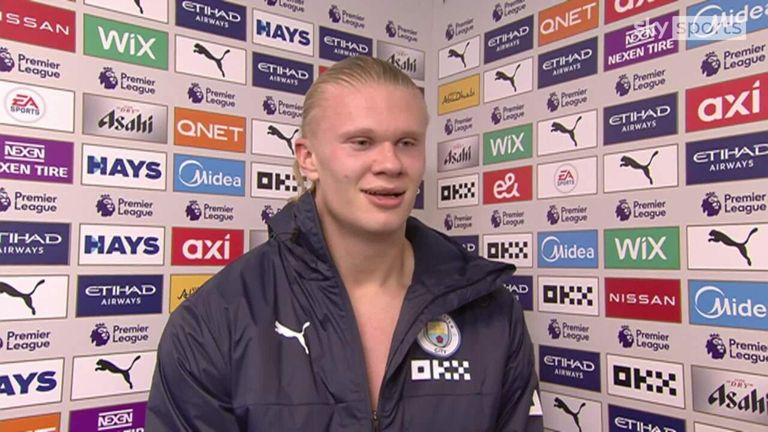 Erling Haaland admitted he was nervous before scoring a late winner from the penalty spot as Manchester City overcame Fulham to return to the Premier League summit.

Pep: We played with right anger 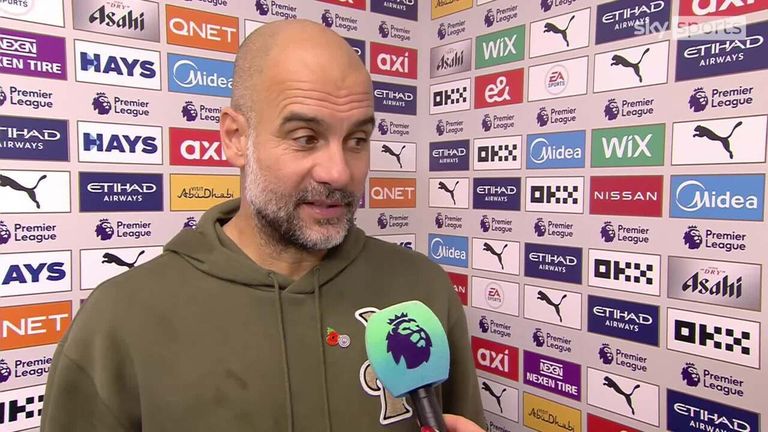 Manchester City boss Pep Guardiola was in jubilant mood after Erling Haaland's late winner against Fulham fired them back to the top of the Premier League.

Man City boss Pep Guardiola: "My heart is still alive. It was like two games as 11 vs 11 we played really good but we played 65 minutes 10 vs 11 and against Fulham it's not easy.

"With and without the ball then we had to play at the right tempo and in the right moments. It was really good and one of the best experiences we've ever had here.

"You saw how we came together at the end and so it was a great afternoon for us. They missed Mitrovic who is really important for them, but the way we played for 65 minutes was amazing.

"We had more chances, more control and showed personality. We played with the right amount of anger and disappointment for many reasons."

Silva: We must use defeat to grow 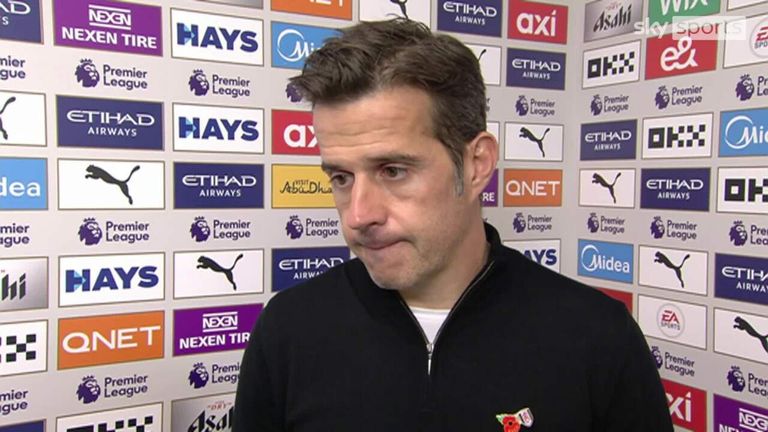 Fulham boss Marco Silva says losing late to Manchester City is tough to take but he wants his side to grow from it.

"We have to use it to grow, that is the only way. We have to grow in terms of maturity in these situations and understand that in some moments, mistakes can happen.

"The commitment, the attitude, everything was there. The penalty is a tough one to take. The game was completely under control when the penalty came.

"We know the reality as we know the type of team we're playing against - it was much more than just Haaland both on the pitch and on the bench.

"We wanted to start differently by being a bit more brave on the ball and prepare our attacks better from the first minute but the effort was there."

There were scenes of relief as the Etihad erupted at the final whistle. When news broke that Aleksandar Mitrovic would not be involved due to a slight ankle issue, Manchester City supporters must have felt they were in for a routine afternoon against Fulham.

Julian Alvarez continued his encouraging run of form to open the scoring, but there would be nothing routine about this 10th straight home win in all competitions for Pep Guardiola's side.

What is it about 3pm kick-offs at Eastlands? City have often taken their eye off the ball when the UK television cameras are not watching, but it was a firm refereeing decision - not complacency - which turned this contest into a right dogfight in the driving rain.

Guardiola did not look happy after Joao Cancelo's red card, but despite the numerical advantage for Fulham, City would enjoy 71 per cent of the ball and register 16 attempts to their opponent's four.

Alvarez looks an outstanding young talent who was unfortunate to be the man replaced as Haaland entered the fray but Guardiola would be vindicated.

This was a below-par performance from his side - only De Bruyne kept up his form - but winning is all that matters as we edge towards the enforced World Cup break.

For both of City's goals here Bernd Leno could be questioned, with Haaland's penalty squirming underneath his body, but having missed the last two games through injury, it was a dramatic denouement written in the stars.

Manchester City host Chelsea live on Sky Sports in the Carabao Cup third round this Wednesday. Coverage starts at 7.30pm on Sky Sports Main Event with kick-off at 8pm.

City then round off their pre-World Cup Premier League fixtures at home to Brentford on Saturday November 12. Kick-off is at 12.30pm.