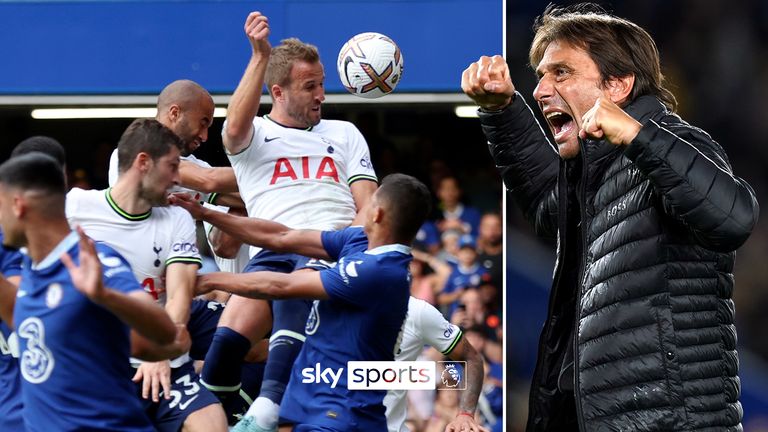 Antonio Conte put Tottenham's comeback win over Bournemouth last Saturday down to a second-half change of mentality - "we started to play nasty," he said afterwards - but in truth their growing prowess from set-pieces was a bigger factor.

The equalising goal, headed in by Ben Davies, came from an Ivan Perisic corner from the right-hand side. Rodrigo Bentancur's winner, fired home in stoppage time, arrived in similar circumstances, Heung-Min Son delivering the corner from the left.

The goals clinched an invaluable win for Spurs after two straight Premier League losses. They were also the eighth and ninth they have scored from set-pieces - and, specifically, from corners - in the Premier League this season.

There has been set-piece success in the Champions League too. Spurs laboured against Marseille on Tuesday night, struggling for long periods to create chances from open play, but the equalising goal, headed in by Clement Lenglet from a Perisic free-kick, was yet another example of their dead-ball threat.

In the Premier League, their total of nine set-piece goals puts them two clear of any other side. Spurs have scored as many in 13 games as they managed in the whole of the last campaign, accounting for 35 per cent of their total compared to just 13 per cent previously.

Similar improvement can be seen at the other end of the pitch.

Spurs conceded from a corner against Marseille but it has become a rare occurrence. A side that conceded 10 times from set-pieces in the Premier League last season, excluding penalties, has this time only conceded once, placing them second to West Ham, the only team yet to concede from a dead-ball situation this season.

Spurs' set-piece transformation is down in large part to the appointment of Gianni Vio, a former banker who joined Conte's backroom staff as the club's first set-piece coach in July.

Vio, 69, is known as a pioneering influence in the field.

He worked most recently with the Italian national team during their triumphant Euro 2020 campaign, but his coaching career spans several decades, taking in spells with Catania, Fiorentina, AC Milan, Palermo, DC United, Brentford and Leeds.

The popularity of specialist set-piece coaches has exploded in recent years - Spurs' neighbours Arsenal are one of several clubs to have benefitted - but there are few with quite as much experience as Vio, the man who literally wrote the book on it.

In Piu 30 Per Cento (That Extra 30 Per Cent), published in 2004, Vio and co-author Alessandro Tettamanzi detail the ways in which set-pieces can be used to maximise a team's scoring output.

Vio believes the effective use of set-pieces can be equivalent to signing a 15-goal-a-season striker and comes armed with a portfolio which is said to include close to 5,000 distinct routines. 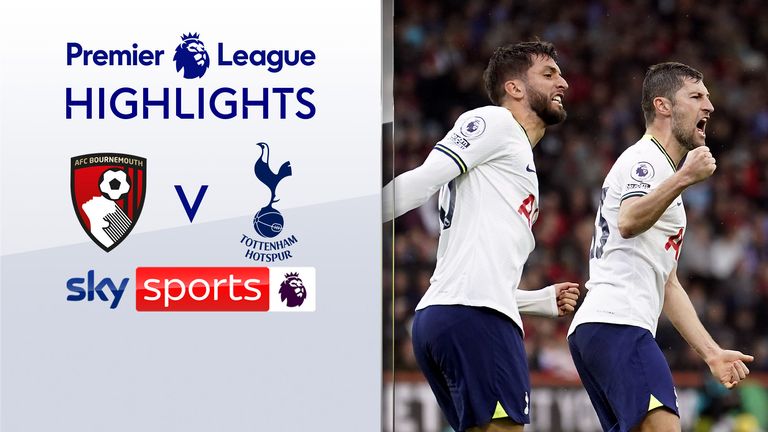 FREE TO WATCH: Highlights from Tottenham’s win against Bournemouth

At Spurs, his influence has been apparent since the opening day of the season, when Eric Dier flicked home a diagonal Son cross from a near-post position during the second phase of a corner in Tottenham's 4-1 win over Southampton.

That goal came after Son's initial delivery had been cleared but it was no fluke. In fact, at the start of October, Spurs scored in near-identical circumstances, Kane glancing in another second-phase Son cross from exactly the same area in their 1-0 win over Brighton.

The near post has become a consistent area of focus for Spurs' corner deliveries since Vio's arrival, albeit with varying patterns of movement and differing intricacies in terms of positioning.

Often, they seek to overload the near post with bodies, thereby outnumbering their opponents and maximising their chances of a successful connection.

When Harry Kane headed in Perisic's delivery for the late equaliser in the 2-2 draw with Chelsea in August, he was one of four Spurs players attacking the near post, with a fifth, in this case Dier, making a decoy run across the same zone to drag his marker away.

Their second goal in the 6-2 win over Leicester in September was strikingly similar, with three players in position to head Perisic's near-post delivery towards goal. It was Dier who made the connection, but Bentancur and Lenglet were well-placed too, with a further three players ready for rebounds behind them.

At other times, the near post has been targeted for flick-ons rather than headed shots.

Kane's winner against Wolves in August, for example, nodded in from close-range at the back post, came after Perisic had flicked on Son's near-post centre. Kane then scored a similar goal against Newcastle last month, with Lenglet this time flicking on Son's corner.

Spurs have shown a willingness to go short with their corners too.

In fact, their total of 22 short corners this season is the joint-highest in the Premier League. This usually involves a second player standing in close proximity to the taker, but there have also been examples of innovation.

For the opening goal against Leicester, Perisic took up a position inside the six-yard box, only to suddenly sprint towards taker Dejan Kulusevski, catching the Foxes off guard, dragging two defenders with him, and giving his team-mate a different angle for a deep cross which was headed in at the far post by Kane.

On an individual level, Kane has been the biggest beneficiary of Vio's methods, the Italian harnessing his aerial ability to deadly effect.

Kane is averaging 1.2 headed shots per 90 minutes this season - twice as many as he was last term - and he has already scored five headers - two more than any other Premier League player, and one more than he managed in the whole of the last campaign.

The addition of Perisic has been significant too. Last season, Son took 157 of Spurs' 193 corners, a share of over 80 per cent, but that share has now dropped to 67 per cent, with Perisic taking roughly a quarter since his arrival on a free transfer in the summer.

Perisic boasts excellent delivery - the 33-year-old also shares set-piece responsibilities for Croatia - and his extraordinary two-footedness has been impactful for Vio and Spurs too.

Indeed, while Son took all corners last season with his dominant right foot, Perisic can take them with either, giving Spurs a left-footed option and allowing them to increase their proportion of inswinging deliveries, which statistical studies have shown to be more likely to lead to goals than outswingers.

It has certainly proved that way for Spurs this season.

From Dier's header against Saints on the opening day to Bentancur's winner against Bournemouth last Saturday, all nine of their set-piece goals in the Premier League have come from inswinging deliveries. Perisic's free-kick to set up Lenglet's equaliser against Marseille on Tuesday was an inswinger too. 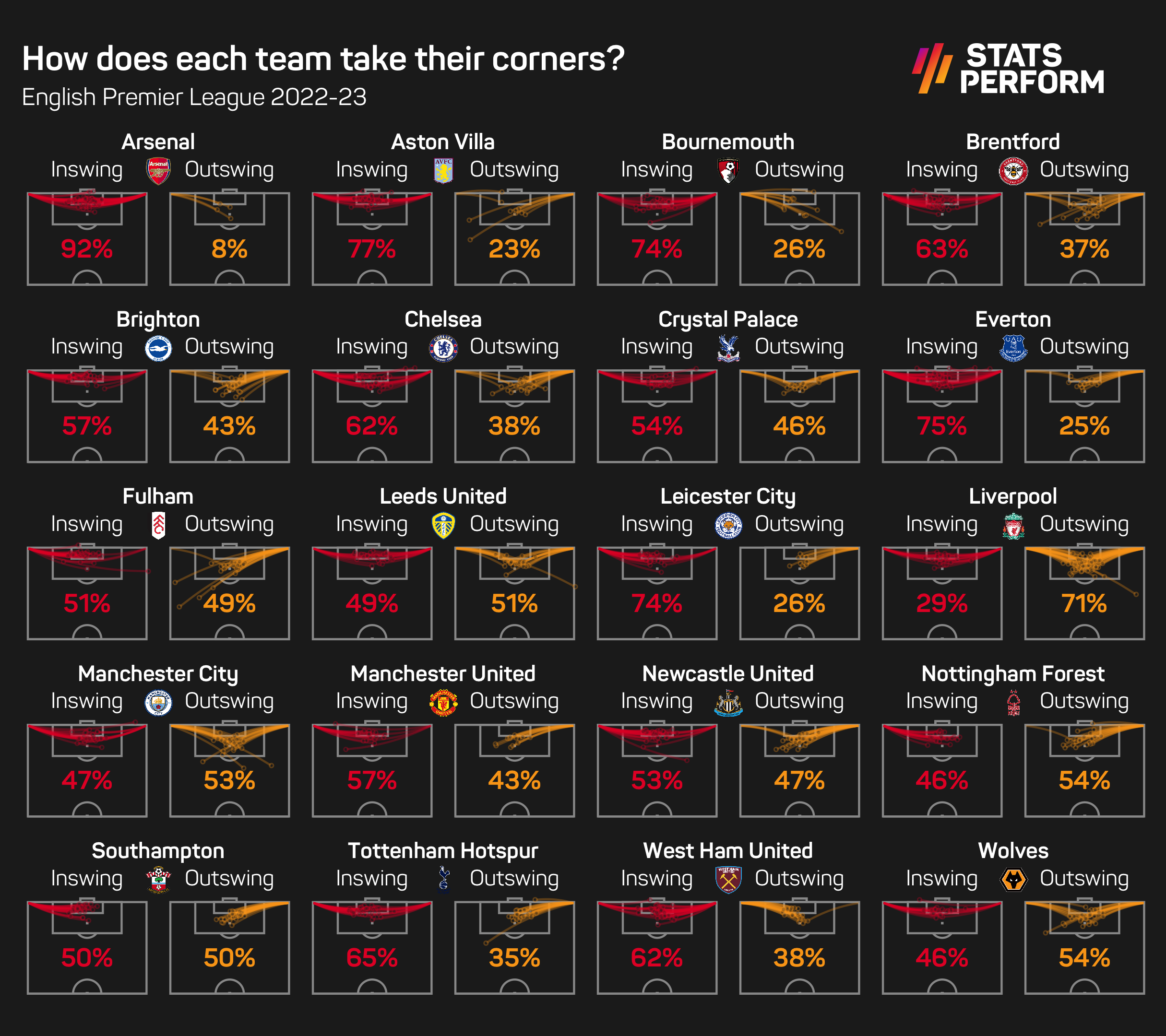 Most crucial of all is that Conte's players quickly bought into Vio's methods.

In conversation with Sky Sports last year, Mads Buttgereit, a set-piece coach currently working with the German national team, highlighted the overarching importance of player buy-in when it comes to implementing set-piece coaching.

He said: "It's not just about one head coach coming in with the idea to bring in a set-piece specialist and thinking, 'We'll bring them in and everything will be fine and we will have the margins.'

"That's not the way you should think. If you want to become great at set-pieces, then it's a question of team spirit, it's something for the whole staff and everyone at the club. They all need to buy into it."

Buttgereit added a set-piece coach needs to develop "strong relationships" with his players, and prove to them the often monotonous and repetitive work they put into choreographing routines on the training pitch will pay dividends in games.

Spurs' early set-piece successes this season helped Vio in that sense. "I just told him three times that we have to give him more money," Kulusevski joked of Vio after the 1-0 win over Wolves.

"He has to get a pay rise for sure. He makes a difference, like you can see. We won on a set-piece today so we have to keep working on that. It's not the most fun thing in the world but it gets results."

Kane has spoken similarly positively of working with Vio. "We know how important set-pieces can be, in tight games especially," he said. "We have Gianni helping us… We see it as a real opportunity."

With nine goals from corners in the Premier League alone, and a further three set-piece goals in the Champions League, the numbers bear it out. A weakness has been weaponised.

The turnaround at the Vitality Stadium and Lenglet's leveller in Marseille were just the latest reminders of Gianni Vio's influence.