Jose Mourinho opens up about life in Manchester without family

By Andy Burton and Richard Morgan

Manchester United manager Jose Mourinho has revealed he is having to adjust to life without his family for the first time.

However, the 53-year-old Portuguese has since been living by himself in the Lowry Hotel in the centre of Manchester, with his wife, Tami, and two children opting to remain in the family home in Chelsea.

Even if Mourinho does eventually buy a house in the city, though, he thinks it is unlikely the three of them will move north and join him in Manchester.

His daughter, Matilde, is at university in the capital, while his son, Jose Jr, signed a two-year scholarship contract with Fulham last summer. 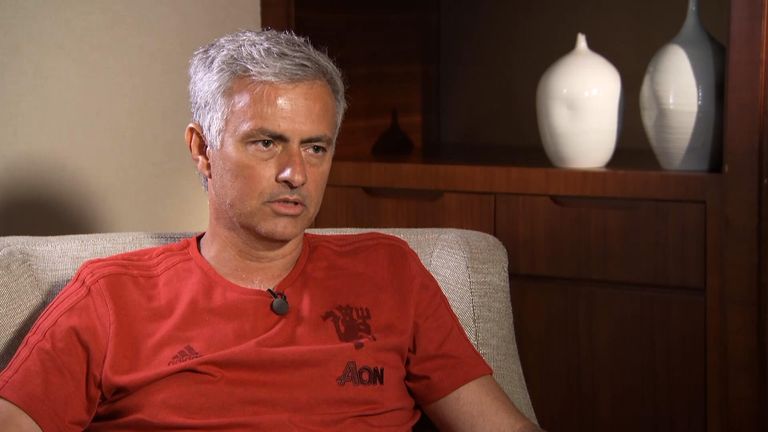 If I find a nice apartment with a good connection from the garage to the apartment, maybe I do it, but I can't cook.

All of which means a drastic change in family life that all four of them are having to get used to.

"Buy a house? I do not know... I do not know," said Mourinho in an exclusive interview with Sky Sports ahead of United's EFL Cup fourth-round tie with Manchester City at Old Trafford on Wednesday night.

"But the reality is that my daughter will be 20 next week. My son will be 17 in a couple of months. They are very stable... university in London, football in London, friends.

"So, they are at an age where they can't chase me like they did before. So, for the first time, the family lives in a different way. We try to feel it, we try to see the evolution of our feelings and see how we cope with the situation.

"But maybe, if I can get a good apartment... not these giant houses that the press says I'm going to buy. I will never buy that! But if I find a nice apartment with a good connection from the garage to the apartment, maybe I do it - but I can't cook!"

Mourinho says it has been a "disaster" having to live out of a suitcase for the past six months, with the paparazzi waiting outside his hotel every time he wants to leave, either for a walk or a meal.

"You know the history of the paparazzi. For the hotel and the brand that sponsors me, the clothes brand, it's amazing because they are there every day," he says.

"For me, it's a bit of a disaster because I want sometimes to walk a little bit and I can't. I just want to cross the bridge and go to a restaurant. I can't, so it is really bad.

"But I have my apps and I can ask for food to also be delivered, which I do sometimes."