David de Gea's technique of saving the ball with his feet is not in the goalkeeper coaching textbook but perhaps it should be. With the help of goalkeeping experts, Adam Bate explores the debate sparked by the Manchester United player's unorthodox methods…

David de Gea made 11 saves in Manchester United's recent win over Tottenham, but what really stood out was that four of them were with his feet. Nobody has made more stops like that in a Premier League game this decade. He even had his match boots framed on the advice of Martin Tyler.

But his technique has sparked debate in goalkeeping circles.

"It's not textbook at all," says Richard Lee, the former Premier League goalkeeper and founder of the Goalkeepers' Union podcast.

"I don't remember ever practising saves with my feet in training. De Gea goes with his feet twice or three times as much as any goalkeeper in the Premier League. It's not textbook at all but it is so much quicker to get down there with your feet and he has become a master at learning when to make that adjustment in a split second."

Lee can only laugh at De Gea's brilliance and the way that he is "almost like a Russian dancer with the shapes he contorts himself into" but he knows it works. "The first goal that Alisson let in for Liverpool against Crystal Palace recently, I think De Gea saves that," he adds. "The reason why is because of that technique with his feet." 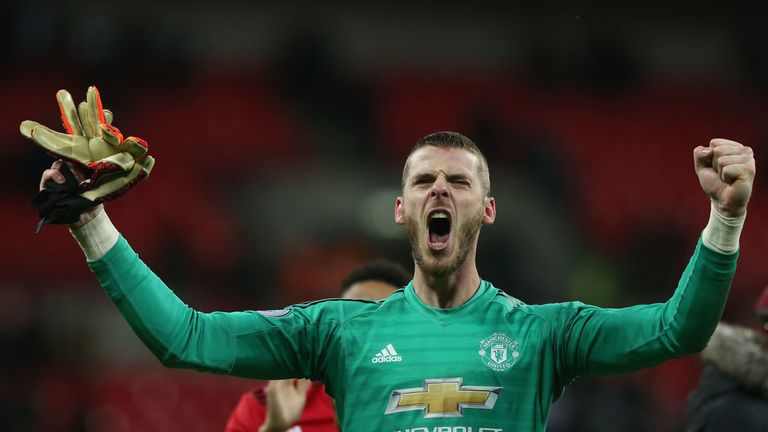 De Gea wants his team to continue their momentum this season

But if it's not in the textbook then how, where and why did De Gea pick it up? While it might be unusual, there is no mystery. Like many Spanish youngsters, De Gea grew up playing futsal, a variant of five-a-side. Indeed, he was an outfield player until the age of 14 which helps to explain the nifty footwork. It seems he was watching the goalkeepers carefully too.

"It's not luck, it's a technique that he has learnt when he had futsal training in Spain," explains Lee. "It's reaction-based and helps with those low ones down by your feet. It's so ingrained in him that he has made it his standard technique." Luis Amado, the famed Spanish futsal goalkeeper once claimed watching De Gea was like looking in the mirror.

Tony Elliott was the England men's futsal goalkeeper coach for the best part of a decade and knows more about the techniques involved in the sport than just about anybody. He watched De Gea's performance at Wembley with a wry smile as the Spaniard practically ran through the entire futsal goalkeeper's repertoire during his second-half heroics.

"People will look at that Tottenham game and say it was poor finishing but that's utter rubbish," Elliott tells Sky Sports. "Some of those shots would have been goals against other goalkeepers because they would have tried to do it by the book instead. De Gea doesn't do it by the book, he does what he needs to do. That for me is brilliant goalkeeping."

The first save with his feet when one-on-one with Harry Kane? "That's a forward kick-through save that futsal goalkeepers have been using for years," says Elliott. The point-blank stop to deny Dele Alli? "That's the K-block," he adds. And the second save from Kane low to his right? "If he dives he cannot get there quickly enough so he goes with the lateral split."

De Gea is not the first to employ these techniques. "As soon as I saw Pepe Reina play, I thought futsal," recalls Elliott, a former Huddersfield and Cardiff goalkeeper himself. It was the way that Reina, then of Liverpool, would open his body wide as he dropped down towards the ball in one-on-one situations. It's no coincidence that Reina was also Spanish.

"You only need to look at his background," says Elliott. "He was at Barcelona and all players there play futsal." As well as Amado, arguably the greatest futsal goalkeeper of them all, Spain also had Paco Sedano, the famed Barcelona futsal goalkeeper. The popularity of the sport in the country has clearly influenced the development of their football equivalents.

"De Gea isn't getting coached in futsal now but he's remembering the type of actions that he learned in his youth," adds Elliott. And De Gea is not alone. Ederson his Manchester City counterpart, has spoken of how his futsal upbringing in Brazil helped him to develop his impressive footwork skills because of the different demands of that form of the game.

"The transferable skills are uncanny. An English goalkeeper would never do the things that Ederson does because that's not how he's been taught." Elliott scoffs at the English preference for five-a-side - "Keystone Cops" - and laments the way that goalkeepers in his home country are not being given the tools they need to succeed in the modern game.

"We are the only country that doesn't play futsal in our youth, so we keep coaching the same way," he explains. "Body square to the ball, two hands down by the side and so on. So what happens then is that goalkeepers are taught a particular technique but in situations where that technique doesn't apply, they don't have another way of saving it.

"I use a golf analogy when I'm coaching. If you only have one wood, one iron and a putter, it's going to be difficult to have a good round and some shots are going to be almost impossible. But if you have a wide range of clubs, your round is going to be a lot easier because you'll have a club for every shot. What we need to do is equip our goalkeepers with the clubs they need so they can make those saves with their feet as well as their hands.

"I am not questioning the knowledge or experience of those goalkeeper coaches who are still saying that they wouldn't coach this technique but I would say to them that the game evolves. The game changes and the decision-making process of the goalkeeper is quicker than ever now because of the speed of the modern game.

A Modern Approach to Goalkeeping

Tony Elliott has put together a book detailing his discoveries about the art and the science of goalkeeping.

Elliott speaks with real passion and if there is a spikiness to his argument it's because he has become accustomed to listening to the critics of futsal suggest to him that there is little to be learned from football's poor relation. "Some goalkeepers will say to me that the goals are bigger in football but the only thing that changes is the size of the goal," he adds.

"Look at those saves from De Gea against Tottenham. How many were actually more than two metres either side of his body? There are two saves where he fully extends but most of them are within a metre or two of his body. How big is a futsal goal? There is your transferable skill. He is working within that futsal space. He isn't diving where he can't dive."

It is a persuasive argument and while changes to coaching methods have been slow in a sport where received wisdom carries great weight, there is a growing sense that the change is inevitable. The K-block technique is now common and there is an expectation that the lateral split will soon be similarly popular. Lee agrees that the coaching will need to come.

"De Gea is way ahead of the curve with this," says the former Watford goalkeeper. "It will become the standard technique for goalkeepers. We have already seen it happen with the side-volley. When I was young, that was seen as showing off. Why are you being fancy? What's the point? Now there are nine-year-old kids with a side-volley as good as Ederson.

Elliott believes any resistance can be explained by this very problem. "I think there is a fear about this changing of the guard regarding goalkeeping," he says. "One or two are hanging on to what was rather than thinking about what is. We are only just now starting to realise that these elements need to be added so our coaches can then go out and coach."

Richard Lee's website and podcast is the go-to platform for goalkeepers, by goalkeepers.

It will happen though. He is certain of that. "A lot of goalkeeper coaches are now asking me about the process and a lot of kids are playing futsal now," he adds. "These young goalkeepers want to emulate their idols. They see De Gea making effective saves and they don't care if it's not in the textbook."

In fact, maybe it's just time to change the textbook.