Manchester United have paid a world-record fee for a defender to sign Harry Maguire from Leicester.

Maguire moves to United on a six-year deal with an option for a seventh year, for a fee understood to be £80m.

"I am delighted to have signed for this great club," Maguire said after completing his move to United.

"I have thoroughly enjoyed my time at Leicester and would like to thank everyone at the club, and the fans, for their fantastic support over the past two seasons. However, when Manchester United come knocking on your door, it is an incredible opportunity.

"From my conversations with the manager, I am excited about the vision and plans he has for the team. It's clear to see that Ole is building a team to win trophies. I am now looking forward to meeting my new team-mates and getting the season started."

Solskjaer: 'Maguire is one of the best centre-backs in the game'

"Harry is one of the best centre-backs in the game today and I am delighted we have secured his signature," Solskjaer said.

"He is a great reader of the game and has a strong presence on the pitch, with the ability to remain calm under pressure - coupled with his composure on the ball and a huge presence in both boxes - I can see he will fit well into this group both on and off the pitch. 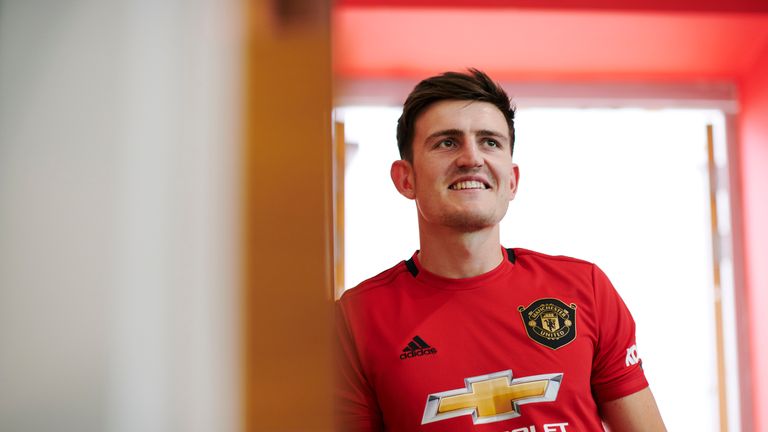 "He has a great personality and is a fantastic addition to the club. I would like to welcome Harry to Manchester United and we are looking forward to working with him as we prepare for the new season."

Sky Sports News reported on Friday that Manchester United had agreed a fee with Leicester for Maguire that surpassed the previous world-record deal for a defender, set when Liverpool paid Southampton £75m for Virgil van Dijk in January 2018. 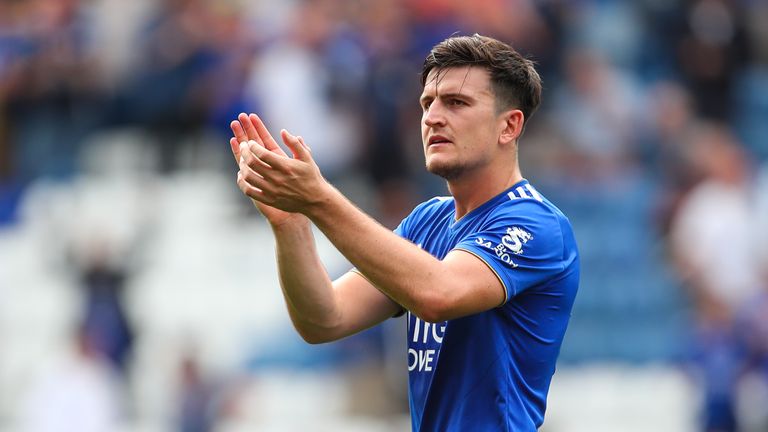 Maguire was in Manchester over the weekend to complete the final details of his transfer and meet with Solskjaer and his new team-mates at the club's Carrington training ground on Sunday.

The 26-year-old is expected to be formally unveiled as a Manchester United player later on Monday and could make his debut for his new club when Chelsea visit Old Trafford, live on Sky Sports on Sunday.

"Manchester United conceded 54 goals in 2018/19, the most of any side in the top six and more than Crystal Palace and Newcastle. But with the services of Maguire now secured, the Old Trafford faithful will be filled with optimism ahead of the new campaign.

"Maguire has all of the attributes typically associated with a United centre-back; his confidence and willingness to step out from the defence saw him acquire the second-highest dribble success rates of any Premier League defender last season, while only Virgil van Dijk bettered his 73 per cent duel success rate in the top-flight.

"Targets have been identified and acquired and, as a result, United have a new case for the defence. Maguire will be one of the first names on the team sheet, with Victor Lindelof the prime candidate to partner him at the heart of the United defence. The right-back position looks sewn up by Aaron Wan-Bisakka already, while Luke Shaw will be given the chance to do the same on the opposite flank.

"United's success through the years has been built on their defence, and Solskjaer looks to have skilfully assembled another. How this defensive unit operates will go a long way to determining whether this new era at Old Trafford is a successful one."

From the game for Hull that earned him attention from a wider audience, through his successes with England and his sustained excellence with Leicester, Adam Bate charts Maguire's astonishing rise to becoming the world's most expensive defender through five matches...