Keane: 'Vieira would've had to have been a squad player and I don't think he would've been satisfied with that'

Roy Keane lifted the lid on his battles with Patrick Vieira on Monday Night Football, as well as revealing what made Manchester United's midfield so special.

The former Manchester United captain, in the Sky Sports studio alongside Jamie Carragher for Arsenal's trip to Old Trafford, reminisced about his years of fierce rivalry with the Gunners legend - including their infamous tunnel spar at Highbury in 2005.

Keane spoke of his "respect" towards Vieira as the pair's sides fought to be the dominant force in English football - but he also took a cheeky dig at his old nemesis, who was once linked with a move to Manchester.

Read on for Keane's memories of a famous duel, as well as his reflections on playing in a United midfield with the likes of Ryan Giggs and David Beckham... 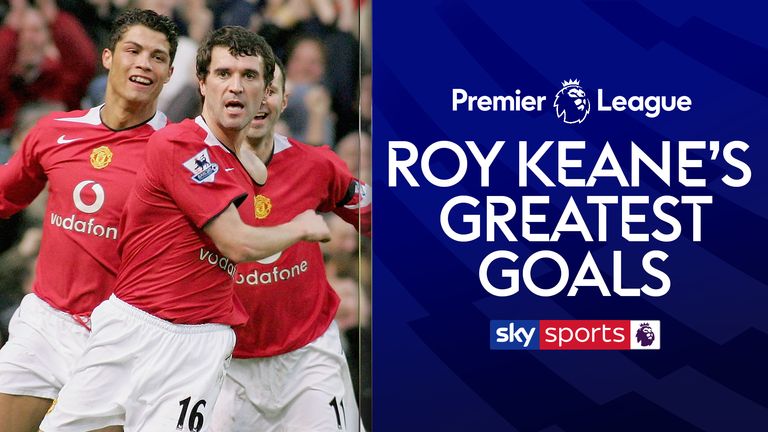 Roy Keane returned to Sky Studios for this Monday's Man Utd vs Arsenal game, we run through his greatest and most memorable Premier League goals for Manchester United!

Why that United midfield was special

When you are playing, you are in that bubble. I was probably quite critical of the lads I played with in midfield, whether it be [Nicky] Butt, [Paul] Scholes, Giggs or Beckham. I was always putting more demands on the players around me. I suppose I never wanted to sit back and think 'we're a good team with a great midfield'. When I look back now, I think what brilliant players they were. I never gave myself a chance to relax and think we were good because if you start getting carried away with yourself, it kicks you where it hurts.

We were just constantly pushing each other, testing each other but now, when your career is over, you look back at Becks, Butty and Giggsy and think, what brilliant players. When you glance back and look at some of the players, just as important as anything else - and we talk about what Manchester United might lack now - they were brilliant lads, brilliant team-mates to have.

They were just great lads who were well grounded. I always felt at United that we always had a good dressing room and that's not to say we didn't have difficult days. I just always felt we had good characters. The manager would remind us every now and again before we'd go into certain big games, you are in the trenches are you happy with the lads around you? I'd always look around the lads in the United dressing room and go, yes.

They were all brilliant lads and that was a huge part of it. Could they play? Were they talented? Of course, they could play, or they wouldn't have been at Manchester United, but they worked their socks off. Giggs and Beckham, for example - we talk about how brilliant they were going forward but they were brilliant at getting back as well. They weren't the type of players who were so good at going forward and lazy at getting back. They would cover the yards, get back and they had the talent going forward to create chances and score goals in big games. They were brilliant team-mates.

I had to be at my best against 'nasty' Vieira

It was a big challenge for me when Patrick came onto the scene.

He was a good player and I knew I had to be at my best when I was up against him. He was nasty, he could put his foot in and he could score a goal.

Patrick would've been my toughest opponent at the time. He would challenge you in different ways. He would get around the pitch, he was good with the ball, he was strong, and he had a goal in him. I knew I had to be at my very, very best to get on top of Patrick.

There was a respect towards Patrick. It was the same with the lads coming through. I go back to Steven Gerrard and the Frank Lampard. You had to be at your best. I had huge respect for him, but I knew if I could win my battle it would give us a better chance of winning the game.

..but he'd have been a United squad player!

What we would've done, when [Juan Sebastian] Veron came to the club, you see that as a challenge. The club has to improve, get better and you have to roll with it, roll your sleeves up and enjoy the challenge. If you want to be a big player at a big club, you have to accept these challenges.

Tunnel spat summed up the rivalry

The key for me after that is don't be distracted by it. Focus on the match. The most important thing that night was to win the game, which we did.

I always think these things look worse than what they really are. It summed up the rivalry.

I would've had to have changed my game, whoever was coming through because I was getting a bit older. With the likes of Scholesy, who were more of a goal threat going forward, my role in the team changed. I was sitting a bit deeper, dictating the game a bit more and I started enjoying that challenge.

We go on about having big influences at the club, but I remember when I first got to United from Nottingham Forest, I was a midfielder who got forward and scored goals. A simple chat with Bryan Robson after a year or two at United, who said you might have to get more involved in the set-up of play and dictating the play. I didn't think I had the confidence to do it. I said that's not my game, but he said if you want to become a big player for Manchester United you are going to have to get involved in the build-up of play.

So that just happened naturally and the more games I played, the more confidence I built up. And when I played with Scholes, Butt and Veron, they were keener on getting forward so I just automatically started sitting a bit deeper, and I enjoyed that role as well because there are big demands on that role.

On that being the best Keane during that era...

My contract was up so I thought I'd play for a new contract or if I leave on a free transfer, I'll get a better deal somewhere else. What helped is I was surrounded by brilliant players. If you are surrounded by good players it does help you, but I was having a decent spell. I was a good age. I'd had the setback of a cruciate injury. I was coming back, I was hungry and as I said, my contract was up so I had a lot to play for.