The United manager handed Ighalo his first start against Club Brugge following his Deadline Day move, and the Nigeria international slotted home in the 34th minute to register his first goal for the club in a 5-0 win.

Solskjaer was impressed by the striker's performance, saying: "Odion was up front there doing what he does. He's a target man, we can play up to him, he can hold it and he's got Bruno (Fernandes) and Juan (Mata) next to him so he's got runners there.

"As a fellow striker myself, I know how important that first goal is. He has been close a couple of times, you can see he sniffs goals, he wants to be there where it sometimes hurts but with that goal as well, he is sharp in his head.

"As the ball is played over to Juan, he spins and is on the six-yard line when Juan puts it there. That's a natural striker."

Fred also scored twice during the Old Trafford rout - tripling his scoring tally from one to three United goals - and Solskjaer revealed the pair have jokingly discussed the Brazilian's lack of goals. 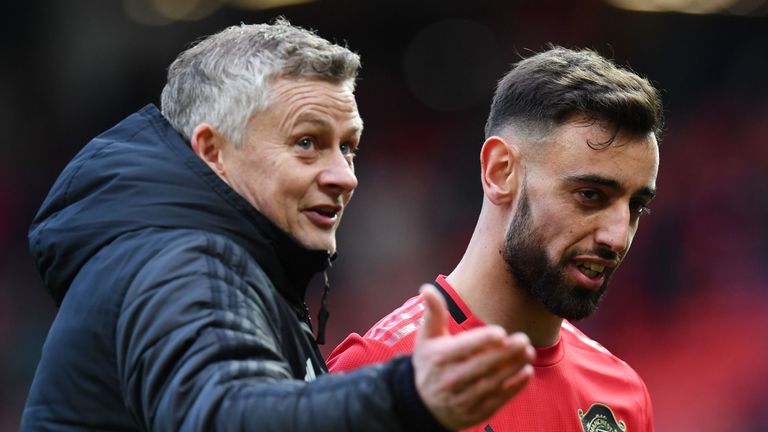 "I wasn't sure if I was going to be alive the next time he was going to score a goal because he's had so many attempts," said Solskjaer with a smile.

"But one with his right, one with his left. It's been an ongoing joke between us of course, but he got that goal and I'm very pleased for him.

"[The performance] is a combination between many things, I think. They've let their shoulders down and gone out to express and enjoy themselves.

"Bruno coming in obviously makes a big difference, you can see he has a hand in the first three goals and what a goal Odion's was so really happy with the contribution.

"I'm very happy tonight. We're in this moment now where we need to rotate a bit, players are getting games, but when you score goals and play like this, you're going to get more confidence.

"It was brilliant to see the start of the game, I thought they had the right intent, created loads of chances and when they went down to 10 men [after Simon Deli's sending off], the game was more or less over."

Anthony Martial was left out of the Manchester United squad for the win over Club Brugge after picking up a muscle injury in training.

Solskjaer confirmed the French forward suffered the injury to his thigh on Wednesday. Solskjaer will be hoping he recovers in time for Sunday's Premier League clash at Everton, live on Sky Sports.

Asked how long Martial would be out for, Solskjaer said: "I don't know. He went off in training on Wednesday. He had treatment.

"He tried [to play] today to be fair. He reported and had a fitness test this morning but he was not [able to play].

"It is not his hamstring. It is his thigh, in and around the knee so I don't know."