Bruno Fernandes has capped his impressive start to life at Manchester United by being named as the Premier League's Player of the Month for February.

The Portuguese midfielder moved to Old Trafford from Sporting Lisbon for an initial fee of around £46.6m in January and played in every one of United's games the following month.

He played every minute of their three Premier League games, registering two assists and a goal and helping United to a 2-0 win at Chelsea and a 3-0 home victory over Watford.

After winning the award, Fernandes told the Premier League's website: "Since I was a kid, it was a dream to play for Man United, and to be there at Old Trafford is the biggest dream of my career.

"When you come to a new club you always want to score, and the first goal is special. It doesn't matter how the goal is scored, but important is the goal's worth.

"I'm happy with my start, but from now I need to give more to be better."

Earlier this month, Fernandes sat down with Sky Sports' Laura Woods to discuss his start to life in Manchester and why he decided to move to United. 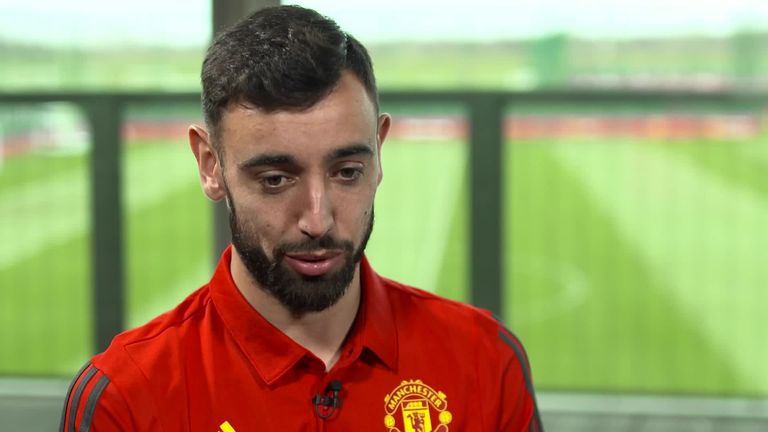 Bruno Fernandes opens up on his move to Old Trafford, his new song, and the reason behind his gesture towards Pep Guardiola during the Manchester derby

"The decision was easy because when I had the chance to come, I didn't think twice," he said. "I talked with Sporting, who had already had some discussions with Man United about my transfer and when they talk with me, I told them my first choice was Man United and it's what I need for my career.

"I see the same team from one month ago. I think we are the same and have a lot of hunger to win, to give a lot, to do better and better in every game.

"In the last month, we've had a lot of really good games and I think we can talk about a new start after Bruno; but it's not about Bruno, it's about the team.

"The team needs the right focus, the right decisions at the time and I think also if Bruno doesn't come, Man United would win the same because one player doesn't change a team.