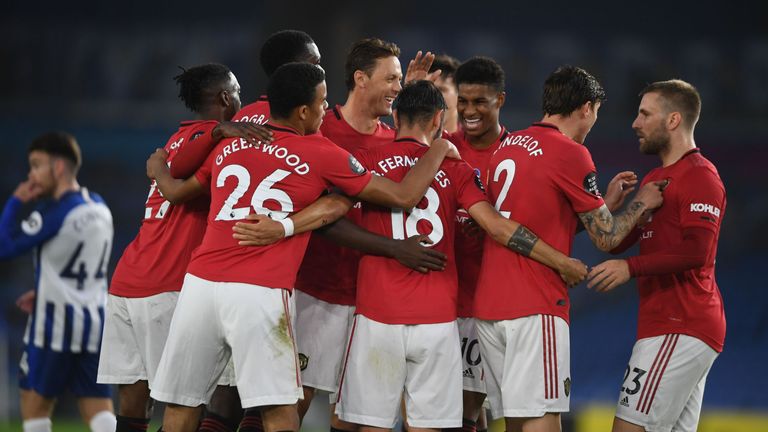 Luke Shaw believes Manchester United are playing with more confidence now than at any other point during his six years at Old Trafford.

United's struggles since Sir Alex Ferguson left in 2013 have been well documented but the club look to have turned under Ole Gunnar Solskjaer, who became their fourth new manager in less than six seasons when he replaced Jose Mourinho in December 2018.

Saturday's 5-2 win over Bournemouth extended United's unbeaten run to 16 matches in all competitions and Shaw, who joined United in June 2014, says it is the most fun he has had playing for the club.

"Over the past years, it hasn't always been the most exciting and we have not always played as well as I feel like we are at the moment - especially in my time here," Shaw said.

"This is the most confident [we have felt]. Around the training ground and on the pitch now, the confidence is so high and we are going into games now full of belief.

"A big turning point was going 1-0 down [against Bournemouth] the other day. In recent times we would have struggled with getting results, but I think that is a sign that we are going in the right direction.

"Of course we are very happy with how things are going but of course there is still room for improvement we all believe."

United have placed an increased focus on adding players of high character to the squad under Solskjaer, who has spoken of his desire to avoid bringing in any "rotten apples".

That approach has paid dividends with Harry Maguire and Bruno Fernandes quickly emerging as two of the team's primary leaders. Shaw believes Solskjaer deserves credit for turning around the culture within the dressing room, which had appeared fraught towards the end of Mourinho's time in charge.

"The manager has done a brilliant job," Shaw said. "Of course the players he has brought in, the group of players now, we all get on really well and I think there is a great happiness in and around the training ground each day.

"Everyone is smiling, everyone is enjoying each other's company and I think that is important to have a successful team. Everyone wants the same thing and gets along with each other and I can see a big change in the group not just on the pitch, but with each other off the pitch too."

'Bruno pushes us day in, day out'

Fernandes, in particular, has been a transformative signing for United and Shaw says he is a driving force in the dressing room.

"For me, Bruno is a massive part of the change, the culture that is now going on at United," Shaw said. "He pushes that day in, day out.

"[He is] an amazing guy off the pitch, he's funny and he has massive confidence in his own ability, which none of us doubt. He's been perfect on the pitch.

"The whole team has changed I believe. The injuries we had also - Paul [Pogba] and [Marcus] Rashford - have also come back and hit the ground running in this part of the season. Everyone is pulling their weight and doing a great job." 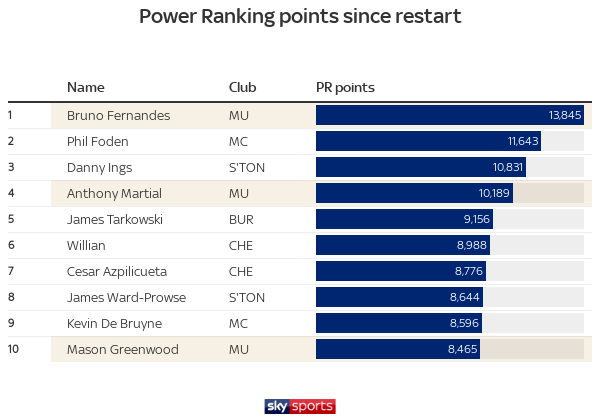 'Greenwood can become a United legend' Mason Greenwood has also been a major positive for United since the team returned to action last month.

The 18-year-old worked hard in the gym while the team were self-isolating during the pandemic and it is paying dividends on the pitch.

Greenwood has scored three goals and added an assist in United's last two Premier League matches, and Shaw believes the sky is the limit for him.

"The growth that Mason has made in the last year-and-a-half he has been in and around the first team is amazing," Shaw said.

"For me personally, I feel like he has turned from a kid to a man in such short time and now he's understanding what this league is about.

"He has grown in size, he has got stronger and he is not fragile anymore. [Before, he] could be pushed off the ball.

"The most important thing I would say for him is ignore the hype, ignore what people are saying, just focus on yourself, keep doing what he's doing and there is no reason why he can't become a very important player for Manchester United in the future.

"He can become a United legend, no doubt about it." United travel to Aston Villa on Thursday before finishing their Premier League campaign with games against Southampton, Crystal Palace, West Ham and Leicester.

They also remain in the FA Cup - where they will face Chelsea in the semi-finals on July 19 - and the Europa League.

Shaw is hopeful United can win their first trophy under Solskjaer but admits the biggest priority for the squad is to qualify for the Champions League after failing to do so last season.

"It's great [but] we don't want to get too comfortable with it, we want to keep pushing ourselves. We believe next season will be a very good season and we have got big priorities to obviously reach the Champions League," Shaw said.

"We are still in two cup competitions that we believe greatly that we can win. As long as we all stay fit and we keep doing what we are doing, I don't see why we can't achieve these things.

"Top four - Champions League next season - is the biggest for us. Manchester United is one of the biggest clubs in the world. We need to be in the biggest competitions and I think the games we have left, they are winnable.

"If you look at the start of the season, I think these are games that we didn't get points in or struggled in.

"Hopefully we have turned our fortunes around and we have learnt from what we weren't doing back then and we feel confident with our run in that we can get maximum points and I don't see why we can't."