Manchester United have added some huge signings but their dramatic 2-1 defeat to Young Boys in the Champions League was a defeat engineered from the dugout...

Manchester United have brought a legend home, signed one of the game’s greatest defenders and added one of the brightest prospects in European football. But at the highest level matches can still be lost from the bench and this was one of them.

But it was Manchester United manager Ole Gunnar Solskjaer whose tactical decisions ensured that the Swiss side deserved the points.

Everything had looked to be going to plan when Cristiano Ronaldo - who else? - put United ahead inside the opening quarter of an hour. But the red card to Wan-Bissaka late in the first half put the onus back on the manager. Things began to unravel.

The initial decision to replace Jadon Sancho with Diogo Dalot was explicable. United needed a right-back on the pitch. The subsequent move to switch to a back three at half-time, bringing on Raphael Varane for Donny van de Beek, was far from necessary.

Solskjaer's side went into containment mode, attempting to defend their one-goal lead but showing little appetite to do anything more than that. United did not even muster a shot after the 25th minute of a match in which their opponents had 19 of them. 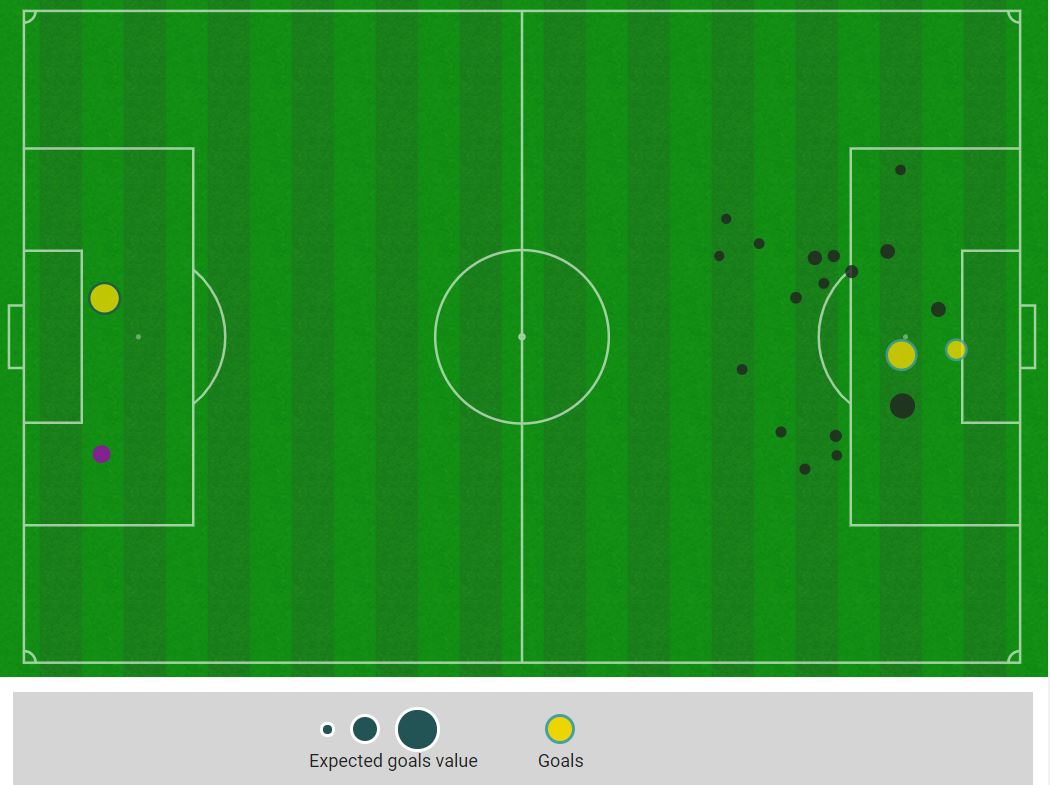 Their total of two shots is the fewest that they have had in any of their 138 Champions League matches since Opta began keeping records of such things in the 2003/04 season.

"Manchester United couldn't get out of their half," Paul Merson told Sky Sports.

"If that was Manchester City with ten men, Young Boys wouldn't have touched the ball."

Some might think it is harsh to judge the performance once Wan-Bissaka had been sent from the field but the one-man advantage enjoyed by Young Boys hardly merited such caution, such paucity of ambition. Better teams would have offered more.

"Look at the substitutions," added Merson.

"You want the ball going the other way because if the ball goes the other way then your opponents cannot squeeze the game. That is all Young Boys did. They pushed up to the halfway line because there was no threat behind.

Ronaldo's admirers have spent much of the past fortnight explaining how this once complete footballer has become more of a penalty-box poacher in the latter stages of his career. That was of little use with United getting nowhere near that penalty box.

Solskjaer waited until after the equaliser had gone in before withdrawing Ronaldo and Bruno Fernandes - only to replace them with Nemanja Matic and Jesse Lingard. This was not about shifting momentum, it was about hanging on for the draw.

In the absence of any attacking threat, Young Boys were able to continue to dominate. Still, with Varane, Harry Maguire and Victor Lindelof repelling everything that was tossed into the area, it looked like United would hang on - until Solskjaer's final interjection.

Apparently realising the need to add some sort of counter-attacking threat, or perhaps in an attempt to waste time, the final switch was made - introducing Anthony Martial for Fred. The move required Lingard to drop into a deeper role. That had consequences.

It was from there, finding himself in that unusual position, that Lingard made the mistake that ultimately allowed Young Boys to win the game. It felt more like the culmination of a series of debatable tactical decisions that conspired to consign United to defeat.

David Wagner's Young Boys had been regarded as the outsiders in this group but the hope now will be that they can cause another upset or two. If Atalanta and Villarreal do the double over them, it will put huge pressure on United in their remaining games.

This is the first game of six in this Champions League group. There is time to turn things around, the opportunity to recover from a disappointing start. United are top of the Premier League table. That alone shows that they are able to come up with results.

And yet, they have not convinced since that opening win over Leeds.

"Against Wolves, they were very fortunate. Against Newcastle when it was 1-1, it was a heads-or-tails game. It could have easily gone Newcastle's way."

He might have mentioned the draw against Southampton too.

United still feel like they are less than the sum of their parts.

"Ole has built a squad that should be capable of winning the top prizes," said United legend Paul Scholes, speaking on BT Sport. "There is not a lot of difference in the top four squads, the only difference is probably in the managers."

Sometimes, matches are won by moments of individual brilliance. Manchester United have lots of players capable of that. But sometimes, matches need to be won by the manager. The suspicion remains that United's rivals have a coach more likely to do that.

This defeat was an unwelcome reminder of how it can cost them.