Match report as Aaron Wan-Bissaka shown a straight red card after a clumsy challenge on Christopher Martins; sending off changed the complexion of the game, with Jordan Pefok scoring with final kick of the game after Jesse Lingard error to win it for the hosts

Cristiano Ronaldo scored again for Manchester United, but they were beaten 2-1 late on by Young Boys in their Champions League opener after Aaron Wan-Bissaka's red card.

Despite playing with 10 men 55 minutes, it looked like a solid defensive display would see United come away with a point.

But a late error from Jesse Lingard allowed Jordan Pefok (90+5) to slot home the winner with the final kick of the game.

Man Utd had been heavy favourites heading into the game, and made the perfect start as Ronaldo - who went level with Iker Casillas on all-time Champions League appearances (177) - slotted through David Von Ballmoos' legs inside 13 minutes.

But the complexion of the match-up was changed in the 35th minute as Wan-Bissaka was shown a straight red for a heavy and clumsy challenge on Christopher Martins.

Sensing an opportunity and buoyed by a passionate home crowd, Young Boys pressed and probed for the leveller and made the breakthrough midway through the second half. Moumi Ngamaleu (66) poked the ball past David de Gea, before Pefok scored a late second following continuous pressure from the hosts.

It was a nightmare start for Man Utd in Group F, who will welcome Villarreal - who beat them in the Europa League final three months ago - to Old Trafford in two weeks' time in desperate need of three points.

How United were beaten in Bern

Both sides had sights of goal in the opening four minutes. Meschak Elia muscled Fred out of the way to pick up a loose Jadon Sancho pass, but driving into the box. However, his effort bobbled wide of the target. At the other end, Bruno Fernandes dinked a wonderful ball in from the left, trying to pick out Sancho's run, but goalkeeper Von Ballmoos easily collected.

But soon after, the Young Boys stopper would have been disappointed in the manner he conceded the opener from Ronaldo. Fernandes lifted in a superb pass, picking out the run of Ronaldo at the back, who slotted the ball through Von Ballmoos' legs as it trickled over the line.

Man of the match: Meschak Elia.

Both goalkeepers were called into action just before the half-hour mark. Christian Fassnacht cut to the top of the area from the right, but his strike stung the palms of David De Gea. Man Utd then broke at the other end, Fernandes feeding Ronaldo again, but the latter's strike was saved well by the Young Boys goalkeeper.

But in the 35th minute, the tide turned for Man Utd as Wan-Bissaka was shown a straight red card. It was a careless, studs-up challenge on Martins, and the referee rightly produced the red card. Soon after, Young Boys had their best chance of the game. Ulisses Garcia's cross flashed through the area, with Fassnecht driving onto it over on the right. However, his fierce volley dragged just inches wide of the far post.

With Young Boys pushing for the equaliser, United need to regroup at half-time and introduced Raphael Varane for the second half. Ronaldo cut a solitary figure up-front as the waves of Young Boys attacks kept coming, but had a penalty shout in the 53rd minute, going down in the area with Mohamed Camara at his shoulder. However, the referee emphatically waved away the claims.

Young Boys made a deserved breakthrough in the 66th minute. The impressive Elia sent an inviting cross in from the right, with Ngamaleu poking a foot in front of Varane and flicking the ball past De Gea at the near post, with the ultra fans behind the goal erupting into jubilant scenes of celebration.

The hosts continued to press for a winner - Sandro Lauper forced a fingertip save from De Gea - but it was a huge error from Lingard that Young Boys took advantage of. A sloppy pass from the substitute left Pefok through on goal, and he easily slotted home past the United goalkeeper.

He was mobbed by his teammates - substitutes included - as he wheeled away to celebrate in front of the packed-out home end, as United were left to reflect on a dismal evening in Bern.

Man of the match - Meschak Elia

An impressive performance from the forward. He had a superb early chance and easily beat Fred down the left not long after, proving to be a handful. He provided a wonderful assist for the equaliser, and had been playing inviting crosses such as those in from the start. Thankfully, it eventually paid off.

Young Boys manager David Wagner: "We've won a couple of games already, but to beat Manchester United in the Champions League is unique. I'm just really happy for everyone who witnessed it. Every single person here played their part.

"The lads went above and beyond their limits. That's only possible with great support. We wanted to show our intensity, our aggression and our passion. The lads did brilliantly and deserve huge credit." 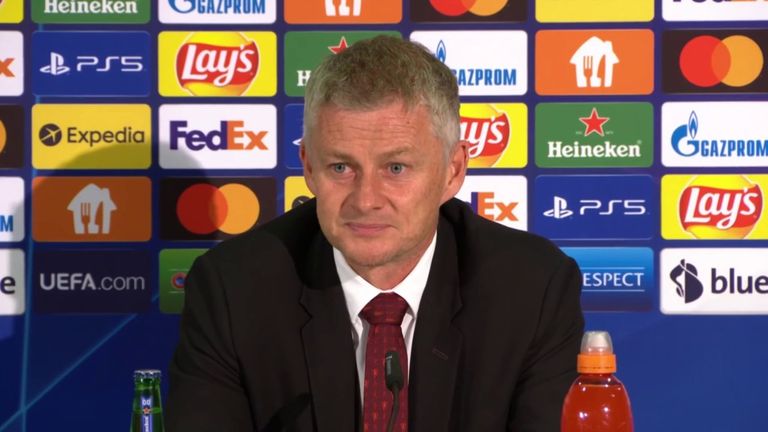 Man Utd manager Ole Gunnar Solskjaer: "I thought we could have done better in the first half with 11 men, but we always knew they were high intensity, energetic, athletic team and I thought we started OK. But we didn't get the second goal that would have killed the game off. In the second half, we felt in control without the ball. They didn't create any big chances, but there were two unfortunate goals.

"I can understand why he gives it because Aaron takes a touch that goes too far. It's never a dangerous tackle because it hits him on the front of his foot. We've seen sometimes - a bit like Harvey Elliot - bad injuries and there was never reckless or malicious.

"But probably a little bit inexperienced to go through without having the ball... But it makes it difficult after that with ten men.

"That's football for you at the highest level. A lack of concentration, make a mistake and you get punished. We did that last year in Europe, we conceded two very sloppy counter-attacks against Istanbul and we lost that game.

"Today, the last seconds, Jesse wants to play it safe and misplaces a pass and we concede a goal. It happens in football. Harry Hindsight is a very good player so if Jesse could have that chance again, he'll turn and boot it the other way. But we'll learn from it.

"We know we've given ourselves a more difficult task than we did last year, but everyone thought we were through after two games last year. You need ten, maybe 12 points, win all your home games and maybe one away from home. We've lost an opportunity to get three points, but we've got two home games next and we'll focus on those two."

Merson: Result not a surprise

"Manchester United haven't got going. Against Wolves, they were very fortunate. Against Newcastle when it was 1-1, it was a heads-or-tails game. It could have easily gone Newcastle's way.

"Champions League football is hard and it doesn't matter who you are playing. For Young Boys, this is their biggest game ever. And if you don't match that, you are in trouble. This isn't the biggest shock to me.

"Manchester United couldn't get out of their half. If that was Manchester City with ten men, Young Boys wouldn't have touched the ball.

"Look at the substitutions. He brought Lingard on for Ronaldo. Young Boys were petrified of Ronaldo but Lingard plays how l used to play - he will come back and get the ball, and that's not helping because you are down to ten men already. You want the ball going the other way because if the ball goes the other way then your opponents can squeeze the game. That's all Young Boys did: they pushed up to the halfway line because there was no threat behind.

Man Utd are back in action on Super Sunday when they travel to West Ham, live on Sky Sports; kick-off 2pm. Their next Champions League game will come at home to Villarreal on Wednesday September 29.