Sporting Lisbon president Bruno de Carvalho remains frustrated by Marcos Rojo’s sale to Manchester United and says third-party ownership of players is a "monster living in almost all clubs" which must be properly regulated.

Argentina international Rojo made the move to Old Trafford late in the transfer window for a reported £16million and is available to make his debut against Queens Park Rangers on Sunday after being granted a work permit.

However, Sporting are still in a dispute with Rojo’s third-party owners Doyen Sports, who claim they are entitled to 75 per cent of the transfer fee. 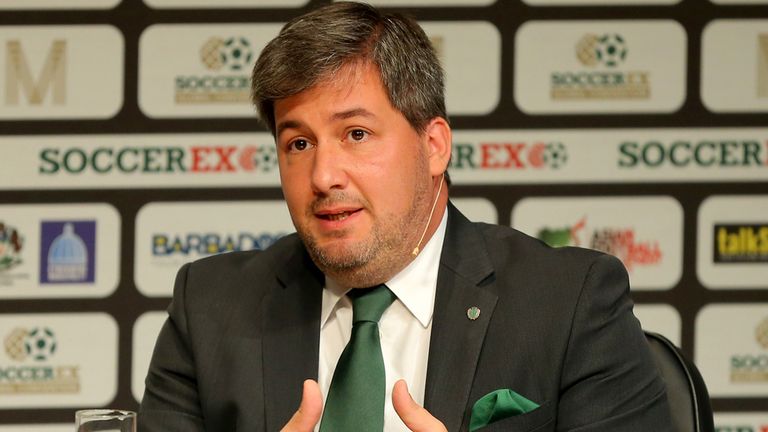 I think now it (third-party ownership) is a monster. A monster that is living in almost all the clubs, so now I cannot see how [it can be banned]; the only solution is regulating it.

Doyen, an offshore fund with undeclared investors and owners based in Malta, have in recent years bought large stakes in players’ economic rights at major clubs in Portugal and Spain, but De Carvalho insists the contracts the club signed under the previous management were in breach of FIFA regulations.

De Carvalho says the deal was invalid because it gave Doyen the right to ‘manipulate’ the club’s decisions.

He claims Sporting did not want to sell Rojo, but Doyen offered the player for sale over the club’s head, ‘to Manchester United and all the world’.

Asked if Rojo himself had not wanted to leave, De Carvalho said: "He was very happy to be in Sporting but he felt the opportunity to come to Manchester was very good."

De Carvalho added: "I am against funds where we don’t know where the money is coming from, and who try to manipulate football.

"Many times there is similar owners from the funds and gambling companies, so match-fixing is the worst fear now for football. Everybody’s seeing the problem."

Speaking about third-party ownership, he continued: "I think now it is a monster. A monster that is living in almost all the clubs, so now I cannot see how [it can be banned]; the only solution is regulating it. We need to have a discussion very serious with everybody very quick."

Doyen have denied any wrongdoing over the Rojo transfer and insisted their contract was valid.

A spokesman said: "We categorically do not manage or influence the player and we ensure that is written into every contract we have with the club. This is the first ever issue we have had and it is with a specific president who now wants to renege on a bona fide contract that his club has signed. We welcome taking the matter to court.”

"We operate in an open and transparent way and we welcome regulation in this sector."