Maurizio Sarri has called on his Chelsea players to follow up their victory over Manchester City with a strong performance in Sunday's Premier League clash at Brighton.

The Blues will hope attention is fixed on the field of play after two high-profile incidents involving their supporters this week - the alleged racial abuse of Raheem Sterling and anti-Semitic chanting during the Europa League win at Vidi in Hungary on Thursday.

Sarri lauded his players for their performance and, after weeks in which he has bemoaned a lack of motivation and application, afterwards immediately called on them to continue to show the same desire. 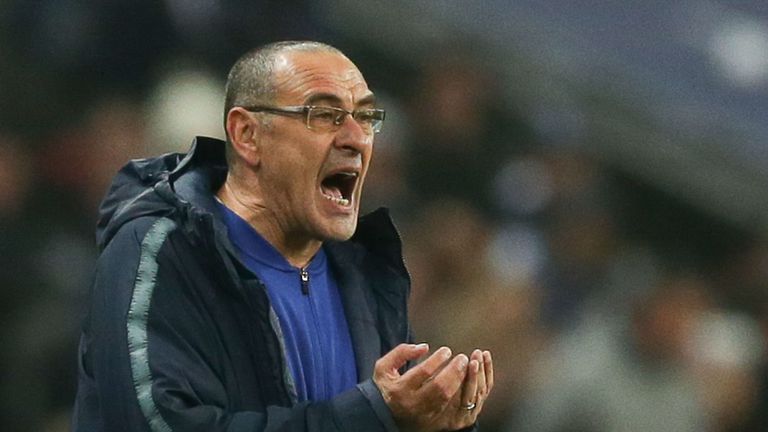 Sarri says it was easy for Chelsea to motivate themselves for their win over Manchester City, but that they must now do so against 'smaller teams'

That will be tested at Brighton, after the inconsequential, on the field at least, draw with Vidi, when Chelsea had already advanced to the Europa League last 32 as Group L winners.

On facing Brighton, Sarri said: "For us it is a very important match. We need to confirm our motivation and determination like we showed in the last match.

"We need these qualities with continuity because every match is three points. We need to improve, improve a lot.

"I agree this match for us is really very important. Maybe it is the most important in this season at this moment."

Striker Alvaro Morata could miss out with a knee problem sustained in Budapest, and his absence would mean Olivier Giroud is Sarri's only recognised striker.

Kepa Arrizabalaga, Antonio Rudiger, Eden Hazard, Cesar Azpilicueta and N'Golo Kante are poised to return to the starting line-up after being rested for the Hungary trip.

Mateo Kovacic, Gary Cahill and Victor Moses missed out through injury and could be absent again.

Jorginho, like David Luiz, was an unused substitute against Vidi and Sarri stressed the Italy playmaker's importance while highlighting again his rationale for selecting Kante in a more advanced role.

"If you play 4-3-3 in my style of football, then the central midfielder is a very technical player.

"Jorginho is very fast in the mind. He is able to play one touch or two touch. Fabregas also is technically really very good.

"I think that Kante in my style of football has to play there, in right midfield.

"I can understand that somebody might think something different but if you think to my football, you have to say that I am right."